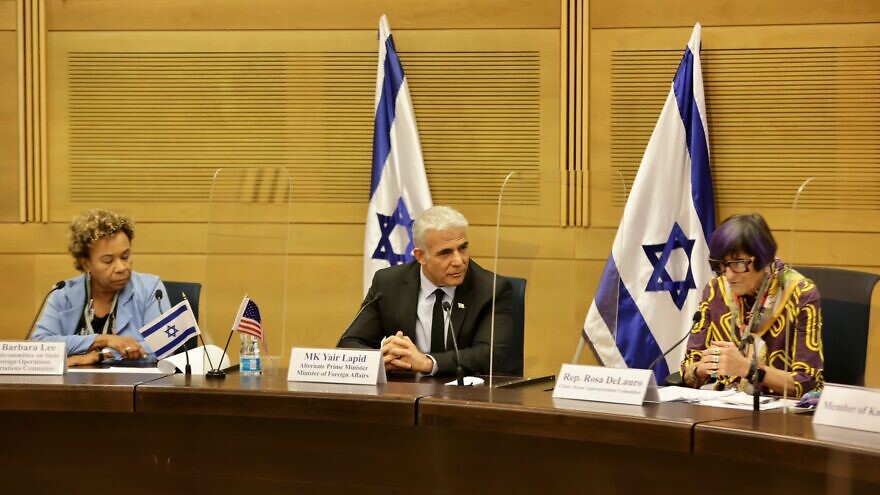 In a tweet, Lapid thanked “them for supporting the replenishment of the Iron Dome missile-defense system, and we discussed the importance of continuing to strengthen the U.S.-Israel relationship.”

This evening at the Knesset, I met with a delegation of Democratic members of Congress. I thanked them for supporting the replenishment of the Iron Dome missile defense system, and we discussed the importance of continuing to strengthen the US-Israel relationship. ???????????????? pic.twitter.com/DBiJI8gDcL

According to J Street, the trip emphasizes “balance and providing equal time to Israeli and Palestinian voices, the delegation will meet with ministers in the Israeli government, Members of Knesset, and representatives of the IDF, as well as with leaders of the Palestinian Authority, and with a wide range of Israeli and Palestinian civil society leaders, issue experts and activists.”

DeLauro, who heads the House Appropriations Committee, helped spearhead the $1 billion resolution on Israel’s Iron Dome missile-defense system in September after funding had been removed from a larger government spending bill over the objections of several progressive Democratic lawmakers. This incident touched off criticism among Republicans and even some moderate Democrats over the Democratic Party’s commitment to Israel.

Among others in the delegation is Pocan, who has been an outspoken critic of Israel in recent months. In May, during Israel’s 11-day conflict with Hamas in Gaza, he led a group of nearly a dozen progressive Democrats in censuring Israel’s policies towards the Palestinians on the House floor, accusing Israel of “disproportionate discrimination and treatment” of the Palestinians.

Bowman, who has been included as a member of the far-left “Squad,” has been critical of Israel and called for restricting aid to the Jewish state, though recently voted for funding for the Iron Dome. Last year, Bowman ousted prominent pro-Israel Democrat Eliot Engel in a heated primary.