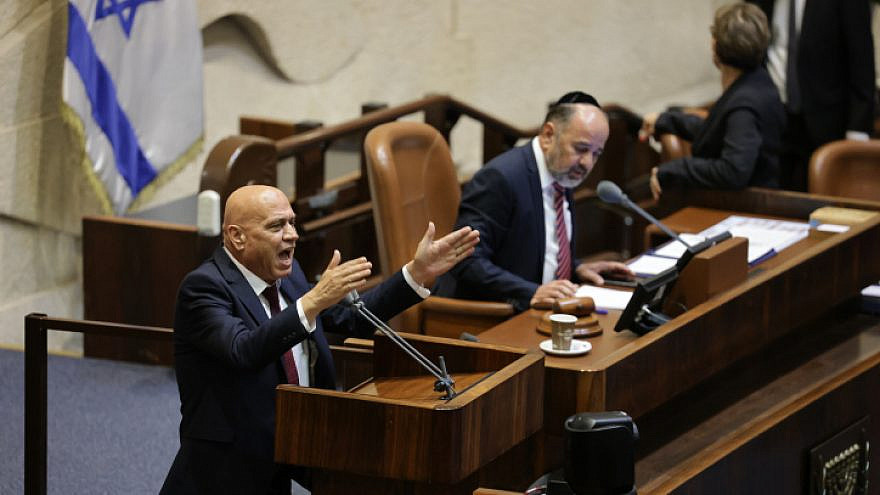 Esawi Frej of the Meretz Party addresses the Knesset plenum ahead of the swearing-in of the new Israeli government, June 13, 2021. Photo by Olivier Fitoussi/Flash90.
Spread the word.
Help JNS grow!
Share now:

Speaking with 103 F.M., Frej, who serves as Israeli Prime Minister Naftali Bennett’s regional cooperation minister, questioned the need for mediators when dealing with the terrorist group, saying Israel should handle the issue by itself.

As a matter of policy, Israel does not negotiate with terrorists, and any contacts with Hamas, Palestinian Islamic Jihad or Hezbollah are conducted through mediators. Egypt has spearheaded negotiations with Hamas for years, while Israel is usually assisted by an E.U. member state when dealing with Hezbollah.

“The PLO was a terrorist group and [its leader Yasser] Arafat was an arch-terrorist. And [former Israeli premiers Benjamin] Netanyahu and [Ehud] Barak and [Yitzhak] Rabin all met with him and reached deals,” said Frej.

“Why do we need mediators to talk to Hamas? We should be talking to them directly, not through third parties,” he said.

Asked about potential fresh hostilities vis-à-vis the terrorist groups in Gaza, the minister said, “This ritual we started in 2005 — [terror] tunnels, missiles, demonstrations, balloons, wars, civilians being killed, the suffering and anguish of residents—this ritual keeps repeating itself. Unless we have the courage to think outside the box on how to resolve things, we are doomed to repeat them.”

Frej added that finding a way to afford Gaza economic relief “is also the right thing to do. Try to strike peace—that’s also one way to go.”

He noted that Meretz “has every confidence that the IDF knows how to handle” Hamas border riots, and wished for a speedy recovery for Border Police officer Bar-El Hadaria Shmueli, 21, who was critically wounded in such a riot on Saturday.

Asked if the IDF should eliminate the terrorist that shot Shmueli, Frej said, “I say as a Meretz member: We trust the IDF, whose job it is to defend. Every soldier must defend himself, and every fighter has orders that he receives according to the situation.”