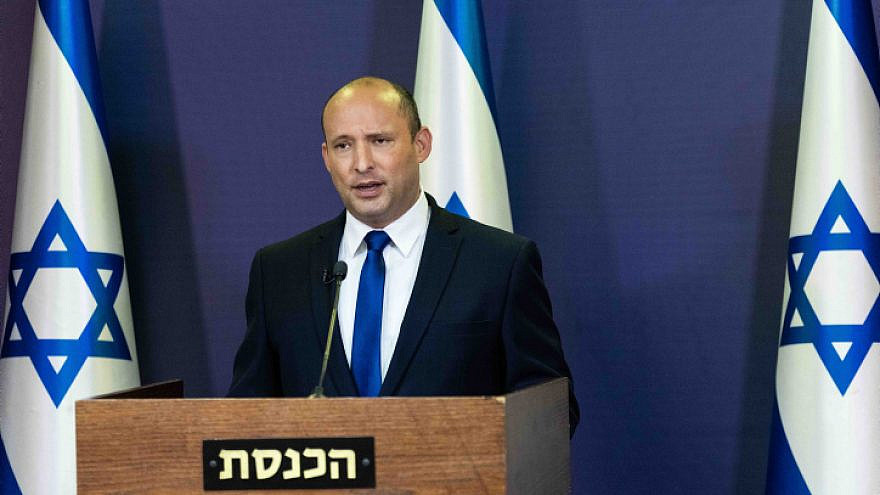 (May 30, 2021 / JNS) Yamina Party leader Naftali Bennett announced his intention Sunday night to join Yesh Atid Party leader Yair Lapid in building a unity “change” government that would include parties from across the Israeli political spectrum, and send reigning Prime Minister Benjamin Netanyahu into the opposition.

“For the past two-and-a-half years, the State of Israel has been in a tailspin,” Bennett said during a nationally televised address. “One election after another—for four election cycles we’ve watched our country hurt itself, weaken itself, and diminish its ability to function.”

He continued, “two thousand years ago, there was a Jewish state which fell here because of internal quarrels. This will not happen again. Not on my watch. The political crisis in Israel is unprecedented on a global level. We could end up with fifth, sixth, even 10th elections, dismantling the walls of the country, brick by brick, until our house falls on us.”

“This madness must end,” he insisted.

Currently, chairman of the opposition Yair Lapid holds the mandate from Israel’s President Reuven Rivlin to form a governing coalition. Lapid offered Bennett the opportunity to serve first in a rotating premiership to lure him to join the mostly left-wing coalition. According to the proposed agreement, Bennett will serve as prime minister first until September 2023, before turning the reigns to by Lapid for the second half of the term.

In his address, Bennett invited all parties across the spectrum to join the government. The parties that have agreed to join the coalition do not make up a parliamentary majority. The Arab Islamist party, Ra’am, has agreed to support the party from outside the coalition. Their outside support is required for the shaky alliance to pass a required no-confidence motion.

Israeli Prime Minister Benjamin Netanyahu, who has held on to his position for 12 consecutive years—the last three at the head of either transitional or unstable governments—may now be just days away from the end of an era.

In a nationally televised response just moments after Bennett’s announcement, Netanyahu called Bennett’s move from his natural right-wing allies “the fraud of the century.”  Netanyahu cited Bennett’s explicit and repeat promises to the Israeli public not to join a government with Lapid, even with a rotation.

Netanyahu called on right-wing legislators, including Bennett’s party, “not to establish a left-wing government,” calling the proposed government a “danger to the security of Israel and a danger to the future of the state.”

Lapid has until Wednesday to present Israeli President Reuven Rivlin with his government, and the coalition will need to pass an official motion of confidence the following week.