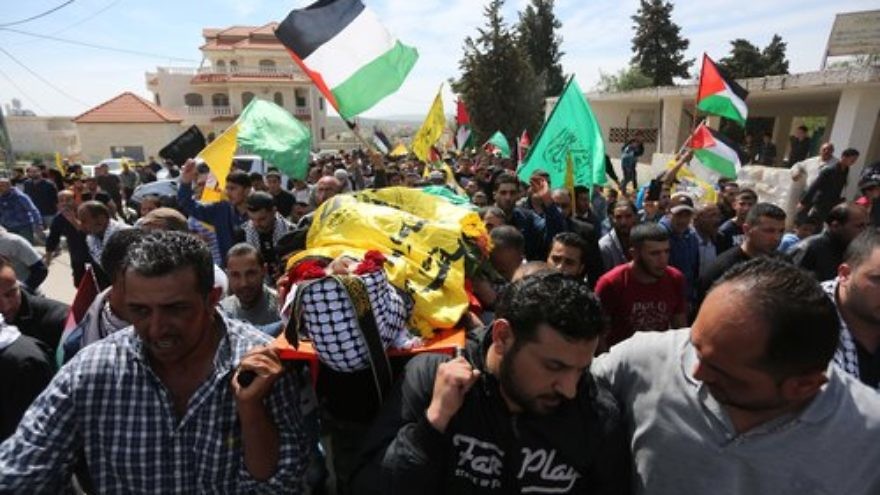 In March 2016 in the West Bank village of Deir Debwan, Palestinian mourners chant slogans while carrying the body of Mahmoud Shalan, a Palestinian-American terrorist who had tried to murder Israelis before security forces killed him. Credit: Photo by Flash90.
Republish this article
811 WORDS
Spread the word.
Help JNS grow!
Share now:

After years of silence, the Obama administration has finally spoken out about an American citizen who was killed in Israel.

There’s just one catch. The focus of the administration’s sudden concern is not one of the 141 Americans who have been murdered by Palestinian terrorists. It’s a Palestinian-American terrorist who tried to murder Israelis.

On Feb. 26, Mahmoud Shalan, a Palestinian with U.S. citizenship, attempted to stab Israeli soldiers to death at a security checkpoint near Ramallah. The soldiers shot in self-defense, wounding Shalan. Israel Defense Forces doctors and Magen David Adom emergency response personnel administered first aid to the terrorist, but he died of his wounds.

The U.S. Embassy in Israel demanded that the Israeli government launch a full-scale investigation of the Shalan incident. For some reason, the embassy did not demand that the Palestinian Authority (PA) investigate why Shalan, who was a resident of PA territory, was trying to murder Israelis. Nor do I recall the U.S. embassy ever urging the PA to investigate when its own policemen have murdered American citizens in Israel. The embassy’s concerns seem to be quite selective.

Well, the Israeli government did conduct an investigation. The conclusions were straightforward. The Israeli Military Advocate General reported to the Obama administration that Shalan tried to commit murder and the soldiers were justified to shoot back. Therefore, the soldiers were not prosecuted.

Nevertheless, Assistant Secretary of State for Near East Affairs Anne Patterson asserted this week that the Obama administration “continues to have concerns about the death of this American citizen.” She vowed that the administration “will remain engaged with the government of Israel on this issue.”

Instead of expressing “concern” and threatening to “remain engaged” over the death of a terrorist, perhaps the administration should be showing some concern and engagement about the American victims of the terrorists.

At least 141 U.S. citizens have been murdered by Palestinian terrorists since the 1960s. Yet the U.S. government has never asked the PA to extradite any of the terrorists for prosecution—even though many of the killers have been identified by name (by the Israeli government), and some are even serving in the PA police or security forces.

The U.S. Justice Department has an Office for Victims of Overseas Terrorism (OVT), which is supposed to update the families of terror victims on efforts to bring about the prosecution of the terrorists. Earlier this year, U.S. Rep. Ron DeSantis (R-Fla.), chairman of the national security subcommittee of the House Oversight Committee, said at a congressional hearing that the OVT has “completely failed” to carry out its responsibilities.

The Obama administration has a “Rewards for Justice” website that offers rewards for information leading to the capture of terrorists who have killed Americans abroad. The website almost completely ignores the Palestinian issue; it does not even mention the names of the victims of the Palestinians. Only two of the many dozens of such attacks are even described.

Moreover, the website categorizes all Palestinian attacks under the misleading label of “Violence in Opposition to the Middle East Peace Negotiations”—with no acknowledgment that many of the attacks were sponsored by the PA itself, despite the PA’s alleged interest in Mideast peace negotiations.

Arnold Roth, the father of murdered teenager (and U.S. citizen) Malky Roth, testified at that congressional hearing. He said that one of his daughter’s killers, Ahlam Tamimi, is now the host of a Hamas-sponsored television show in Jordan, on which Tamimi has repeatedly boasted of her terrorist actions.

Rep. DeSantis turned to Deputy Assistant Attorney General Brad Wiegmann, who attended the hearing on behalf of the Obama administration, and asked, “What exactly is the Department of Justice planning to do about this terrorist who has the television show in Jordan?” Not surprisingly, Wiegmann was unable to provide a coherent answer to that question.

So here we have four concrete steps the Obama administration could take, if it wasn’t so busy worrying about the death of a Palestinian-American terrorist: (1) Demand that Jordan extradite Ahlam Tamimi; (2) Demand that the PA surrender other Palestinians who have murdered Americans; (3) Offer rewards for the capture of Palestinian killers of Americans; (4) Keep the victims’ families informed and updated on efforts to bring the killers to justice.

When Barack Obama first ran for president in 2008, he promised to bring about “fundamental transformations.” I don’t think any of us imagined he would try to transform a terrorist into a victim. But by refusing to take any steps to prosecute Palestinian killers of Americans, and instead going to bat for a Palestinian-American terrorist who tried to kill Israelis, Obama is doing just that.