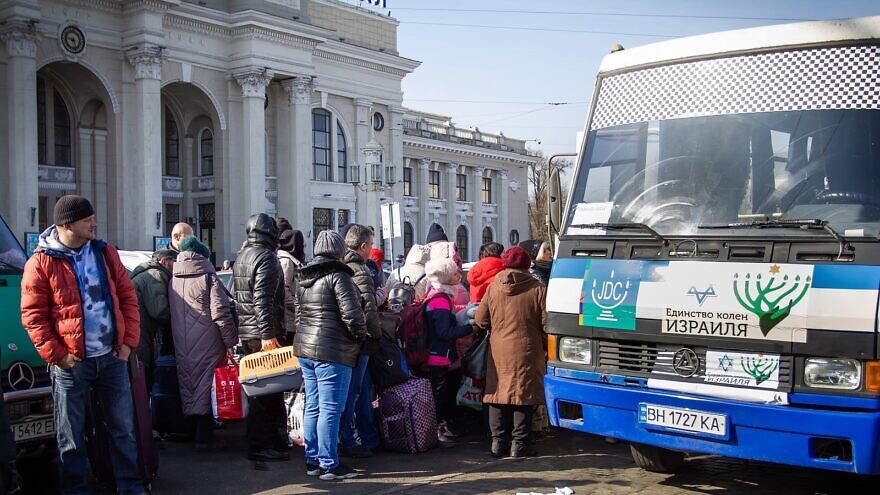 Jewish men, women and children evacuate from the city of Odessa, Ukraine, during Russia's invasion of the country, which began on Feb. 24, 2022. Credit: JDC.
Republish this article
1388 WORDS
Spread the word.
Help JNS grow!
Share now:

(April 14, 2022 / JNS) A small family from Kyiv seeking to leave Ukraine early after the fighting broke out contacted the American Jewish Joint Distribution Committee, commonly known as the JDC or the Joint, for help.

A 40-ish couple, their little boy and the father’s mother wished to evacuate, but because of Ukrainian law requiring all men under 60 to stay in Ukraine, the father couldn’t leave the country. However, he wanted to ensure the safe passage of his wife, their child and his mother across the border.

The family traveled to Mogilev, a town near the Moldovan border, where a JDC volunteer met them and took them to a safe location to spend the night, as well as helped them with logistics in order to evacuate promptly.

But the trip to Western Ukraine took a toll on the 73-year-old mother’s health, forcing her to return home to Kyiv with her son.

“He had to go back because he is young,” said Pini Miretski, leader of JDC’s evacuation team from Ukraine. “He is also taking care of his mother. But he is happy his wife and child are safe. He sends me pictures of them enjoying life in France.”

Packing much-need staples of food and other items for Ukrainian refugees. Credit: JDC.

The family is one among thousands who have received help from the JDC to evacuate Ukraine since the Russian invasion began Feb. 24. Their story highlights a poignant dichotomy.

“On one hand, people are doing what they can to save women and children, the next generation,” said Miretski. “On the other hand, there are people they can’t leave behind.”

As of mid-April, the JDC has evacuated more than 11,900 Jews from Ukraine. JDC staff and volunteers gather evacuees from pick-up points, direct them along safe routes, guide them across checkpoints and give them safe places to stay after they cross the border. Renting hotels, hospitals and summer camps, JDC also provides food, shelter, counseling, and educational and cultural programming in countries including Poland, Moldova, Hungary and Romania, as well as to Western Ukraine, according to Michael Geller, JDC’s director of media relations.

Geller said that before the invasion, the Ukrainian Jewish community numbered some 200,000 people, and that tens of thousands of Jews—probably the majority, a significant portion of whom are elderly—remain.

In addition to helping with evacuations, the organization’s team members in Ukraine and neighboring countries are helping to meet the needs of the aged and vulnerable, including providing them with Passover supplies.

Within Ukraine this year, JDC is providing nearly 16 tons of matzah to tens of thousands of elderly Jews and families.

The organization has also shipped more than 400 bottles of grape juice and more than 700 pounds of kosher-for-Passover food to Jewish refugees in Poland, Moldova, Hungary and Romania. It will also host a series of communal seders in partnership with local Jewish communities for refugees in those countries, using Haggadot (prayer books) in Hebrew and Russian.

The distribution of matzah is supported by JDC’s partnerships with the UJA-Federation of New York, the Jewish Federations of North America, the Claims Conference, and the International Fellowship of Christians and Jews. 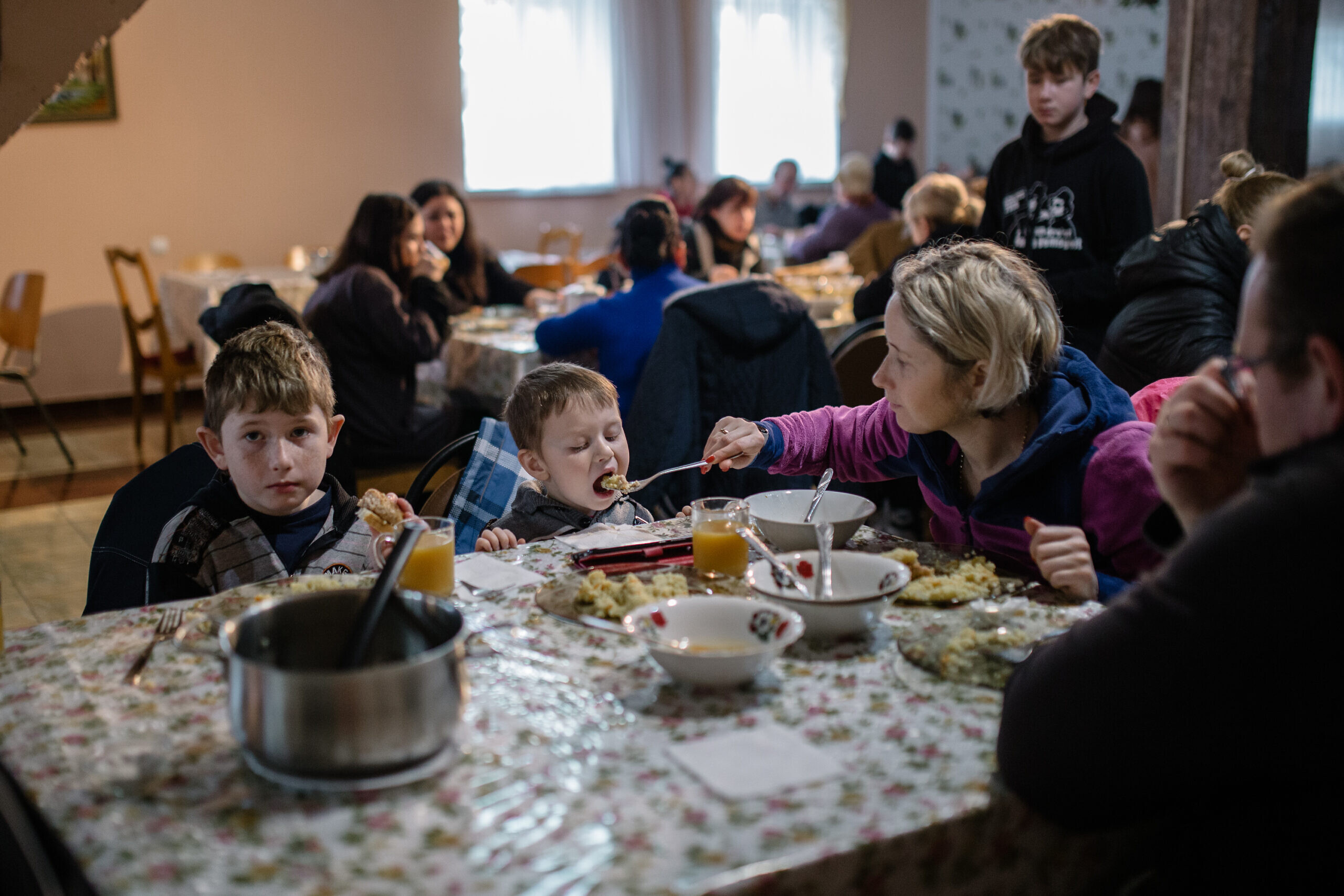 A mother and her children eat a hot meal in Moldova. Credit: JDC.

‘He lived in a ghetto during the Holocaust’

With war raging across the country, JDC’s Hesed welfare program, which has assisted thousands of impoverished Jews across the former Soviet Union for decades, has stepped into the breach, providing food, home health care and Passover supplies, delivered by professionals and sometimes volunteers.

In all, the JDC’s Hesed program serves “tens of thousands” of needy and elderly Jews across Ukraine, said Geller.

Among the Jews the JDC helped evacuate from Ukraine were 4,400 Jews from the southwestern seaport city of Odessa. Among those who remain, Hesed helps around 5,000 elderly and special-needs individuals in the city and its environs.

Inna Vdovichenko, JDC’s representative in Odessa, spoke with JNS.org via Zoom of “scrambling to meet the needs of the elderly and vulnerable” while “living between air alerts.” She shared the story of an 86-year-old Holocaust survivor who himself works as a Hesed volunteer in conjunction with an organization called the Odessa Regional Association of Ghetto and Concentration Camp Survivors.

The man lives on the seventh floor of a high-rise apartment building and has been rushing down to the basement several times a day and night during air alerts. 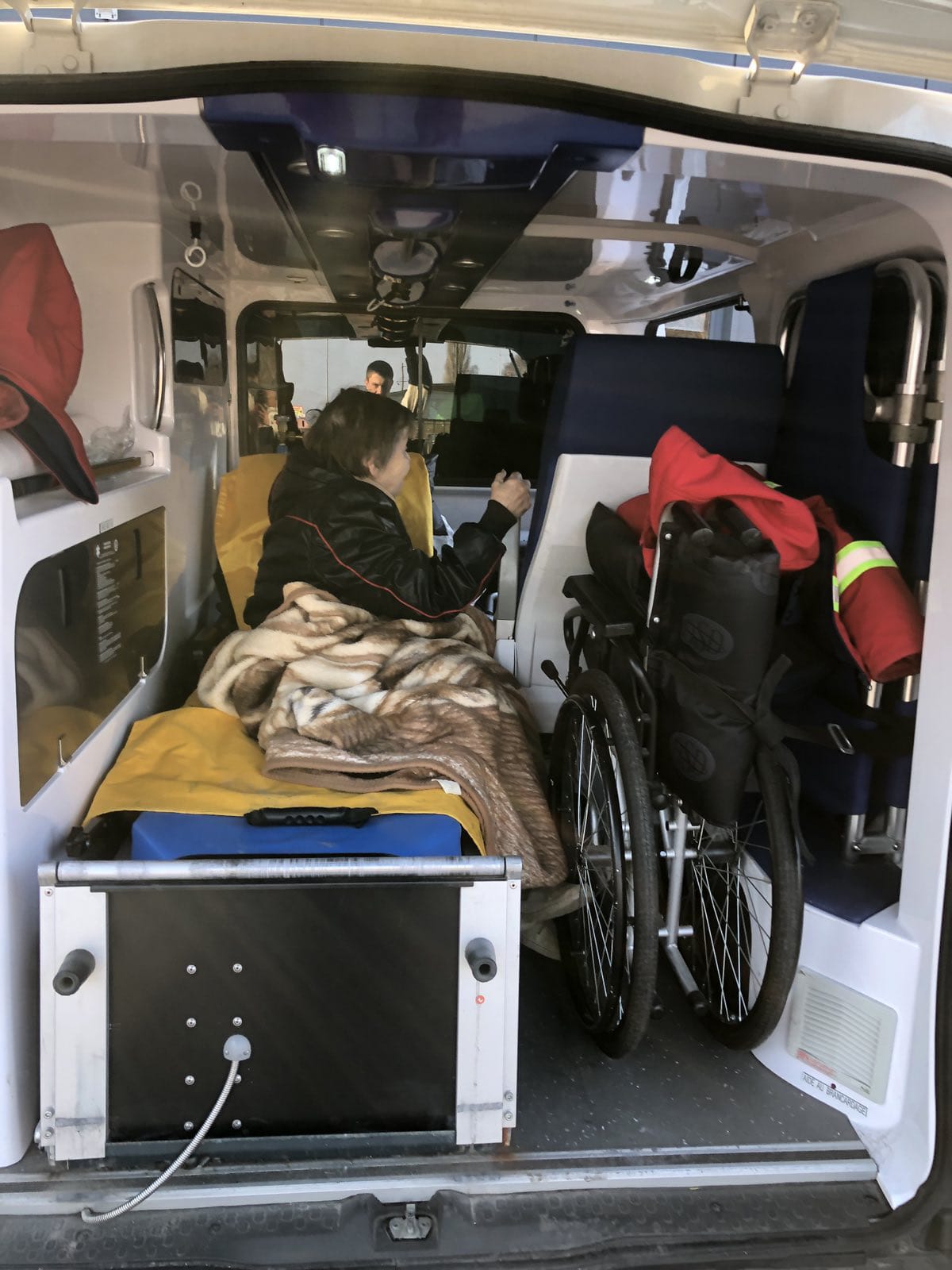 Helping to evacuate the elderly from the dire wartime conditions in Ukraine. Credit: JDC.

“He lived in a ghetto during the Holocaust, and his older brother died there,” said Vdovichenko. The man telling her this situation reminds him of when he was a child, started to cry, adding that “he didn’t want this kind of life for his children and grandchildren.”

Vdovichenko said Hesed sponsors an S.O.S. emergency program providing special services like home repairs, surgeries and special medical help for clients in crisis, as well as continuing cultural and religious activities via Zoom, such as Kabbalat Shabbat events every week that thousands attend in different cities throughout Ukraine, including during the conflict.

“Out of something bad can come some good,” she said, pointing out that much of the online programming started during the coronavirus pandemic and is being utilized to keep people connected during the war.

Hesed runs an Elder Daycare Program that moved online during the pandemic and has been adapted for online cultural events and classes, including a Passover cooking contest taking place over Zoom.

For Passover, Hesed has mobilized college-age Hillel volunteers to distribute matzah boxes to all Hesed clients across Odessa. Hesed home health-care workers and volunteers continue to visit all shut-in elderly in Odessa.

Although they are in a war zone, Vdovichenko said Odessa has been spared the worst of the fighting so far, and it’s been possible to live semi-normally.

“We want our people to be away from the TV and not be watching the news all the time, to feel normal life and to see their friends,” she said. 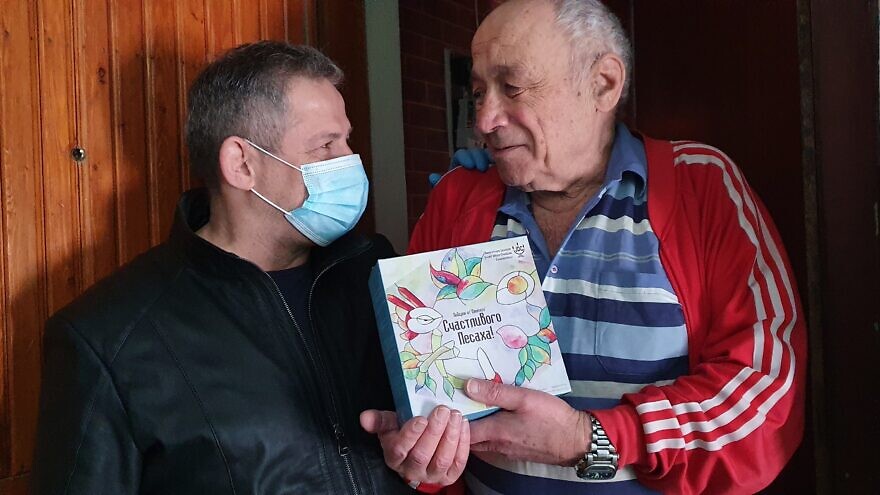 Anatoliy Shwartsman receives a box of matzah for Passover from a JDC worker. Credit: JDC.

‘They carry their lives and history and trouble’

Amir Ben Zvi, crisis management team leader for the JDC in Poland, spoke of helping people to cross the border into a refugee center.

Now the weather is better, but “when we started, temperatures were minus 10, minus 15 [degrees Celsius], and there were huge lines at the border,” he said. “We kept hearing the happy point was when they crossed the border, and saw the blue vests of the JDC and our blue vans helping them to arrive at their countries of destination.”

Although the JDC is overwhelmingly focused on the Jewish community, the agency has also been providing help in the form of medical care, logistical support and phone cards to anyone who needs it, said Geller.

The JDC is working in cooperation with the Jewish Community Center in Warsaw to house 457 individuals at present, said Ben Zvi, some of whom arrived there with only small suitcases. In addition to basics like food and shelter, the crisis management team is providing medical care and counseling.

“They carry their lives and history and trouble,” said Ben Zvi. “If someone has a disability, they are carrying it into Poland while being a refugee. … I just got a call about an elderly man suffering from Alzheimer’s on his way to the border. Just imagine what kind of services must be provided to this person. … But we can’t leave anyone behind.”

The Warsaw JCC was founded and is still supported by JDC, as is a “chain” of other JCCs founded in prior decades extending across the border to Moldova, Romania, Poland and Hungary that allow JDC and its professionals and volunteers to provide way stations for Jewish refugees leaving Ukraine in this crisis, according to Geller. JDC has also rented 50 to 60 hotel rooms in Warsaw “on a daily basis” to handle the overflow. Most of those coming are elderly, and women and children.

For Passover 2022, the JDC and local Jewish community have helped to organize the first seder ever in Warsaw in which all major congregations—from Reform to the Orthodox—are participating together. According to Ben Zvi, it is one of the largest ever.

He recalled a woman he recently saw entering the Warsaw JCC with three children under the age of 7, all holding hands, as their mother told them: “Keep holding hands as we practiced for the last three days.”

“They are in this situation lacking control, trying to reach a safe place,” said Ben Zvi. “It’s really something, the strength of women.”

Gallina Rashba receives a box of matzah for Passover from a JDC volunteer. Credit: JDC.
Republish this article in your newspaper or website