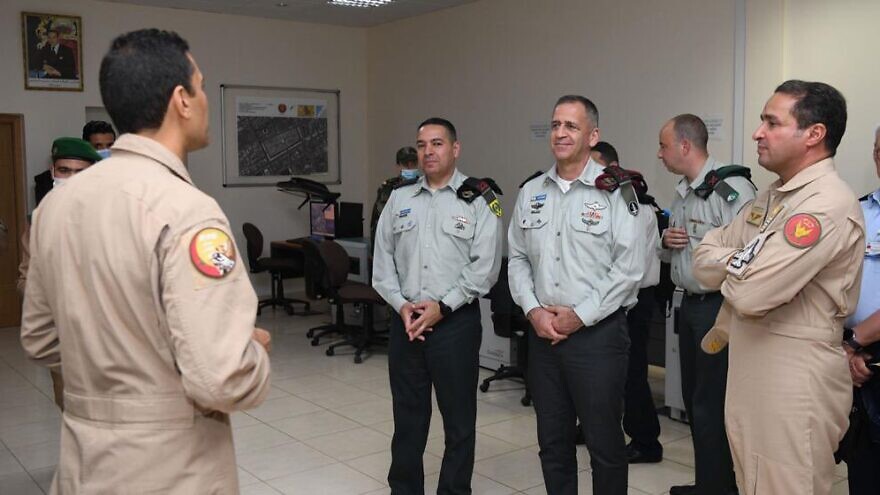 (July 21, 2022 / Israel Hayom) On the second day of his historic visit to Morocco, IDF Chief of Staff Lt. Gen. Aviv Kochavi on Wednesday toured the “Ben Grier” airbase of the Royal Moroccan Armed Forces, as well as neighborhoods where the country’s Jewish community developed.

Kochavi’s three-day visit, the first-ever public visit by Israel’s top soldier in uniform to the Arab state, is being hosted by Moroccan Defense Minister Abdellatif Loudiyi and army commander Lt. Gen. Belkhir el-Farouk. Kochavi is accompanied on the trip by the head of the IDF Intelligence Research Division, Brig. Gen. Amit Sa’ar.

At the airbase, Kochavi met with commander Col. Maj. Hassan Mahuar, and the two discussed cooperation between the countries’ air forces.

Kochavi later met with members of the Moroccan Jewish community in Marrakesh.

“Morocco is an ally to Israel, and is an example of deep connections between peoples based on a common heritage,” he said during that meeting.

IDF spokesman Brig.-Gen. Ran Kochav said prior to the trip that “one of the subjects that will be discussed [in Morocco] this week will be knowledge-sharing, training—the ability to train together in joint maneuvers—weapons development, the transfer of know-how and perhaps also of weaponry.”

The Kan News public broadcaster said Kochavi’s talks with Moroccan officials would also take up Iran’s influence in the region.

The Israeli business newspaper Globes reported in February that state-owned Israel Aerospace Industries would sell Morocco the Barak air and missile defense system in a $500 million deal. Neither country has publicly confirmed that report, and neither has IAI.

Last month, Israeli military officials participated as observers in a major military drill in Morocco, which saw the participation of troops from the United States, France, Italy, the Netherlands, Chad, Brazil, the United Kingdom and others.

In November of last year, Israeli Defense Minister Benny Gantz visited Morocco, where he signed a memorandum of understanding with his Moroccan counterpart to allow defense and military cooperation between the defense establishments in the two countries.

Morocco was the fourth Arab country to normalize relations with Israel in 2020 within the framework of the  “Abraham Accords” after the United Arab Emirates, Bahrain and Sudan, in a move decried by Palestinians as a “stab in the back.”

“Not everything is about security,” Transportation Minister Merav Michaeli told Reuters regarding ties with Morocco. “There are wide interests that we have together and we share.”

She credited Morocco with mediating a deal to permanently open a border crossing from Jordan to Judea and Samaria that is important for Palestinian traffic, and said she was in talks with Rabat about other infrastructure projects.

“Morocco is the player that is able to bring everyone together, to soften everybody’s hardships around whatever issue there is,” Michaeli said in an interview. “They just have a way of speaking to everyone in a way that gets them around the table and gets them to cooperate.”

The Israeli military said it hosted a Moroccan commando unit for a multi-nation exercise in July 2021, established direct military ties with Rabat in March 2022 and, last month, hosted Moroccan top brass to agree on a year-long joint work program.