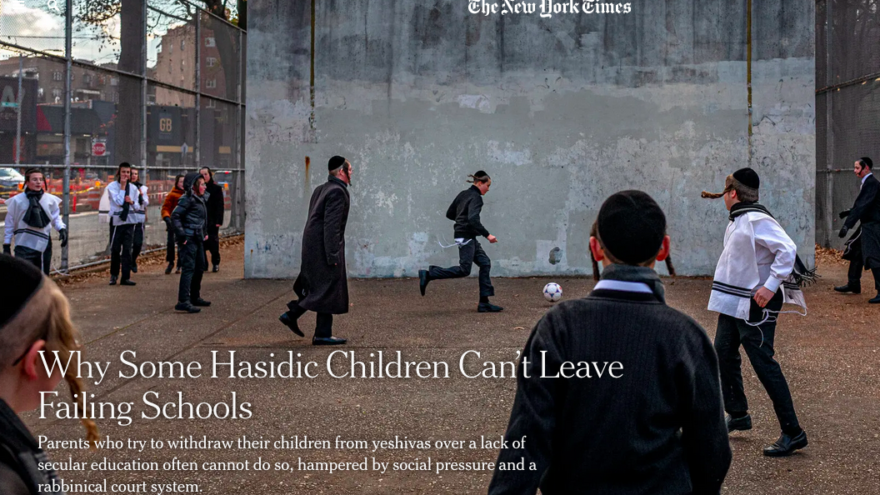 Agudath Israel of America, which represents Haredi Jews, has launched a media campaign, with the introduction of the KnowUs.org website and the purchase of high-visibility billboards. The organization says it needs to get the truth out about its communities and the damage it says the Times is doing through its series of articles about New York’s Hasidic yeshivas, in the wake of rising hate crimes against visibly-practicing Jews in the region.

“We felt that it was important to respond to the poisoning of the atmosphere that is created when major media outlets like the New York Times have such negative portrayals of the Orthodox community and appear to be on a crusade against us,” Rabbi Chaim Dovid Zwiebel, EVP of Agudath Israel, told JNS. “We’ve been involved for many, many years in trying to respond to some of the defamations that appear even in mainstream media against Orthodox Jews and Orthodox Judaism, but we thought it reached a certain tipping point.”

“When the New York Times says these are people who are backwards, who are cruel to their children, who engage in all kinds of practices that have long since been discarded by civilized society, that definitely contributes to the atmosphere that promotes this kind of hate crime,” said Zwiebel, adding that the Times articles are “insinuating all kinds of terrible things.”

In addition to the new website, which seeks to explain facts regarding the Hasidic community, its schools and the impact of the Times articles, Agudah has placed its message on high-visibility billboards around New York City, including one outside the the Lincoln Tunnel. The billboards note the number of Times articles attacking yeshivas, side by side with statistics about rising hate crimes against Jews, inferring a link between the two.

“We felt that it was time to up the ante a little bit in terms of our response to these kinds of attacks, to let the world know that the distorted portrait that is being portrayed by the New York Times and all the negativity about the Haredi Orthodox Jewish population, certainly not the full reality of what these communities are all about,” said Zwiebel.

The reaction to the campaign within the Haredi community has been largely positive, though not without detractors, based largely on what Zwiebel described as the general approach of the Orthodox world.

“We’re not interested in publicity, and billboards are usually not our style. Demonstrations are not our style. Usually, we try to achieve what needs to be achieved behind the scenes, through, you know, through diplomacy, through dialogue. So, this is not something that we are used to or comfortable doing,” he said.

Agudah said it had tried to handle its issues with the Times quietly. Zwiebel told JNS he participated in a recent meeting with the paper, and had sat down early on in the process with one of the authors working on the series.

It’s had little impact, and when asked whether he knows when the Times plans to wrap up its series on yeshivas, now approaching the four-month mark, Zwiebel says, half jokingly, “when the Pulitzer Prize comes in.”

While he hasn’t been able to obtain any clear answers about the Times’ endgame, Zwiebel said it’s almost as if “they sat around the conference table in the editorial board and said let’s identify a segment of our New York community or of American society who don’t share our politics, our religious views, and let’s just open up the kitchen sink and throw everything we have at them. And it’s so bizarre.”