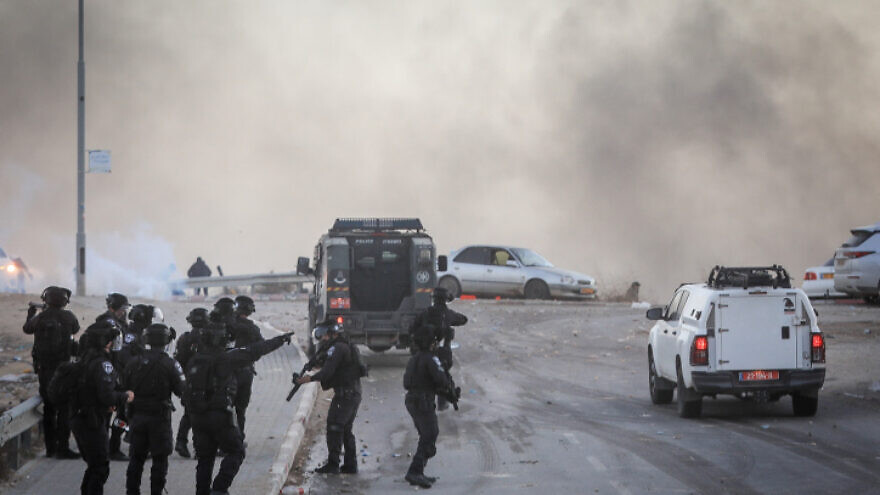 Israeli Police clash with Bedouins during a protest against tree-planting by the Jewish National Fund-Keren Kayamet LeIsrael outside the Bedouin village of al-Atrash in the Negev Desert on Jan. 13, 2022. Photo by Jamal Awad/Flash90.
Spread the word.
Help JNS grow!
Share now:

(January 14, 2022 / Israel Hayom) Rioting by Bedouin residents of the Negev that began on Tuesday night in protest of tree-planting by Keren Kayemet LeIsrael-Jewish National Fund continued overnight on Thursday. Masses of people threw rocks at the car of a security guard who was on his way to Tel Sheva. The guard managed to seek cover at a police checkpoint, but his car was set on fire.

In a separate incident, a police officer sustained minor wounds after rioters threw rocks at a police car on Highway 80, near the Nevatim air force base, breaking its windows. The officer was taken to the hospital for treatment.

Other reports said that rock-throwers had targeted drivers on Highway 60 and that some vehicles were damaged. Police were investigating. Throughout Thursday night, police were also alerted to a few incidents of tires being set on fire on Highways 25 and 80.

Elsewhere that same night, thousands of Bedouin rioters blocked Highway 31 near the village of Mulada. Some of them pulled up the tree saplings planted by the JNF-KKL earlier this week.

Police were scrambled to the protest and used stun grenades to break up the crowds, who threw rocks at them. A total of 10 individuals were arrested on suspicion of disturbing the peace.

Three residents suffered minor injuries in the violence and were taken to the hospital for treatment. The eruption of violence led authorities to close Highway 31 from Shoket Junction to Tel Arad. A few hours later, the road was reopened.

Those who were arrested were due to appear in court on Friday for a remand hearing.