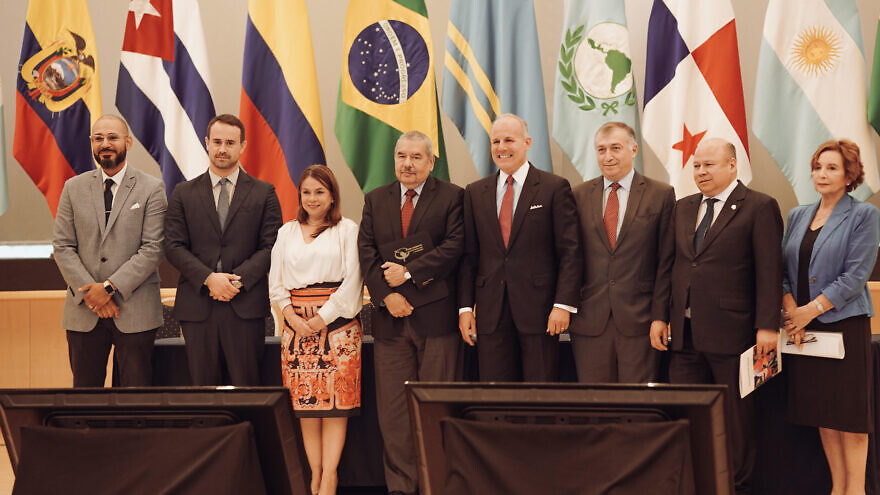 (September 13, 2022 / JNS) Senior ministers, members of parliament, mayors, religious leaders and heads of influential NGOs from across Central America last week expressed their solidarity and support for Israel and called to combat anti-Semitism.

The declaration was the culmination of the first-ever in-person Central America-Israel Forum, which celebrates the State of Israel’s deep and longstanding ties with Central America.

Bucaro received an award during the event in honor of his “strong and enduring relations with the State of Israel and the Jewish People.” He then traveled from the forum to Israel for an official visit where he met with, among others, Israeli Prime Minister Yair Lapid.

Israel’s Minister of Agriculture and Rural Development Oded Forer and Diaspora Affairs Minister Nachman Shai also participated in the confab, which was hosted by the Combat Antisemitism Movement, the Center for Jewish Impact, and the Panama-Israel Friendship League.

Forer acknowledged the historic nature of the “deep and enduring” ties, going back to the support of several Central American nations for the 1947 UN Partition Plan, which called for the creation of a Jewish state.

At the end of the forum, the attendees signed a declaration calling for “the strengthening of ties between Central American nations and the State of Israel in all areas and arenas.”

We, participants in the Central America Israel Forum, agree to the following declaration:

We SUPPORT the strengthening of ties between Central American nations and the State of Israel in all areas and arenas.

We RECOGNIZE the State of Israel as the national, ancestral, and homeland of the Jewish People and call to combat those who seek to delegitimize it, especially those who seek its end through the discriminatory Boycott, Divestment and Sanctions Movement, whose leaders are antisemitic and anti-peace.

We ENDORSE a mutually agreed-upon solution to the Israeli-Palestinian conflict that meets the national aspirations and security needs of both parties. We do not support the internationalization of the conflict and using international institutions to attack the Jewish State or seek unilateral recognition of a Palestinian state at the United Nations.

We ENCOURAGE more Arab and Muslim nations to join the circle of peace and the Abraham Accords, ensuring a more peaceful region where cooperation and collaboration between Israel and its neighbors increases.

We CALL on Palestinian leaders to seize this opportunity, choosing the path and language of peace and fraternity.

We AFFIRM that antisemitism is an increasing ill in societies across the globe and support the use of the International Holocaust Remembrance Alliance (IHRA) Working Definition of Antisemitism, agreed upon by the European Commission and the United States, among many other leading international entities. This definition allows for anti-Jewish prejudice to be clearly defined in its modern-day forms, helping law enforcement to handle it appropriately and justly.