A Palestinian youth prepares to hurl rocks at Israeli security forces during a protest in the village of Kfar Qaddum, near the West Bank city of Nablus, on Feb. 11, 2022. Photo by Nasser Ishtayeh/Flash90.
Republish this article
912 WORDS
Spread the word.
Help JNS grow!
Share now:

(February 18, 2022 / JNS) Palestinian stone-throwing incidents against Jews in Judea and Samaria spiked in 2021, capping a disturbing rise in the total number of attacks since 2018. Observers tell JNS that one reason is Israel’s failure properly to punish the perpetrators. Likud Knesset member Keti Shitrit introduced a bill on Feb. 8 with a potential fix, establishing a minimum penalty for the offense.

“Given the significant increase of rock and Molotov-cocktail terror attacks in Judea and Samaria, it is hereby proposed to enact a temporary order that sets a minimum punishment for the perpetrators of one-fifth of the maximum penalty,” the bill states.

Since the maximum penalty is 20 years, one-fifth is four years in prison. The bill includes a caveat that if intent to harm cannot be proven, the minimum sentence will be two years.

“The problem is that 99% of the people who are indicted receive a punishment more suited for a child than a grown man,” said Matan Asher, spokesperson for Im Tirtzu, a Jerusalem-based NGO, which worked with Shitrit’s office to draft the legislation. 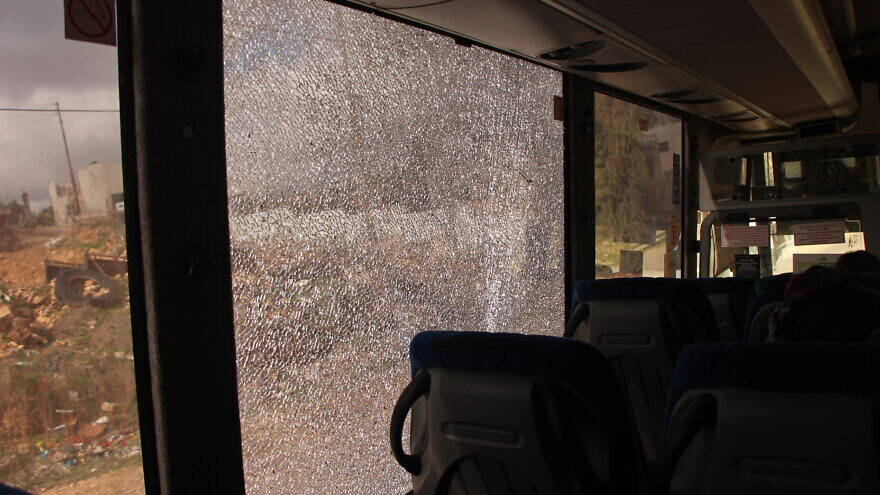 Asher was referring to an October report by the Knesset Research and Information Center which found that of 7,213 cases opened between 2015 and May of 2021, 95%—or 6,796—were closed without an indictment. In 2020, in 82% of cases that involved any prison time, the sentence was less than a year.

Asher said the security situation has deteriorated. “If you told somebody two years ago that there would be stone-throwing during the day, it would have been science fiction, but they’ve started throwing rocks in the middle of the day,” he told JNS.

“The reason is they get such a light sentence,” he said.

Asher traces the rise in stone-throwing and Molotov-cocktail style attacks over the last few years to the expiration of a law introduced by now-Minister of Interior Ayelet Shaked back in 2015. It set a minimum sentence of 10 years’ imprisonment for throwing stones at vehicles. Shaked’s law was itself a response to a rise in Palestinian stone-throwing incidents.

Occurrences fell in the wake of the law. When it expired in 2018, those incidents began to increase, said Asher, adding that “this bill tries to recreate the situation that had been in effect between 2015 and 2018.”

‘The Palestinians indoctrinate their children’

IDF Brig. Gen. (res.) Yossi Kuperwasser, a fellow with the Jerusalem Center for Public Affairs, confirmed that there appears to be a correlation between the sunset of Shaked’s law and the spike in stone-throwing attacks. “The proof of causation in these kinds of things is very problematic, but it seems that there is some sort of synergy between the two phenomena,” he told JNS.

“It’s clear that the current punishment is not enough to deter them,” he said, adding that military courts hearing these cases aren’t taking full advantage of the punishments at their disposal. He noted a January report by Bitchonistim, a group of former Israeli military and security officials, which found that the average sentence in Judea and Samaria was 8.3 months in prison for throwing stones and 13 months for throwing Molotov cocktails. (The report covers the period from Jan. 1, 2019 to Oct. 12, 2020.) 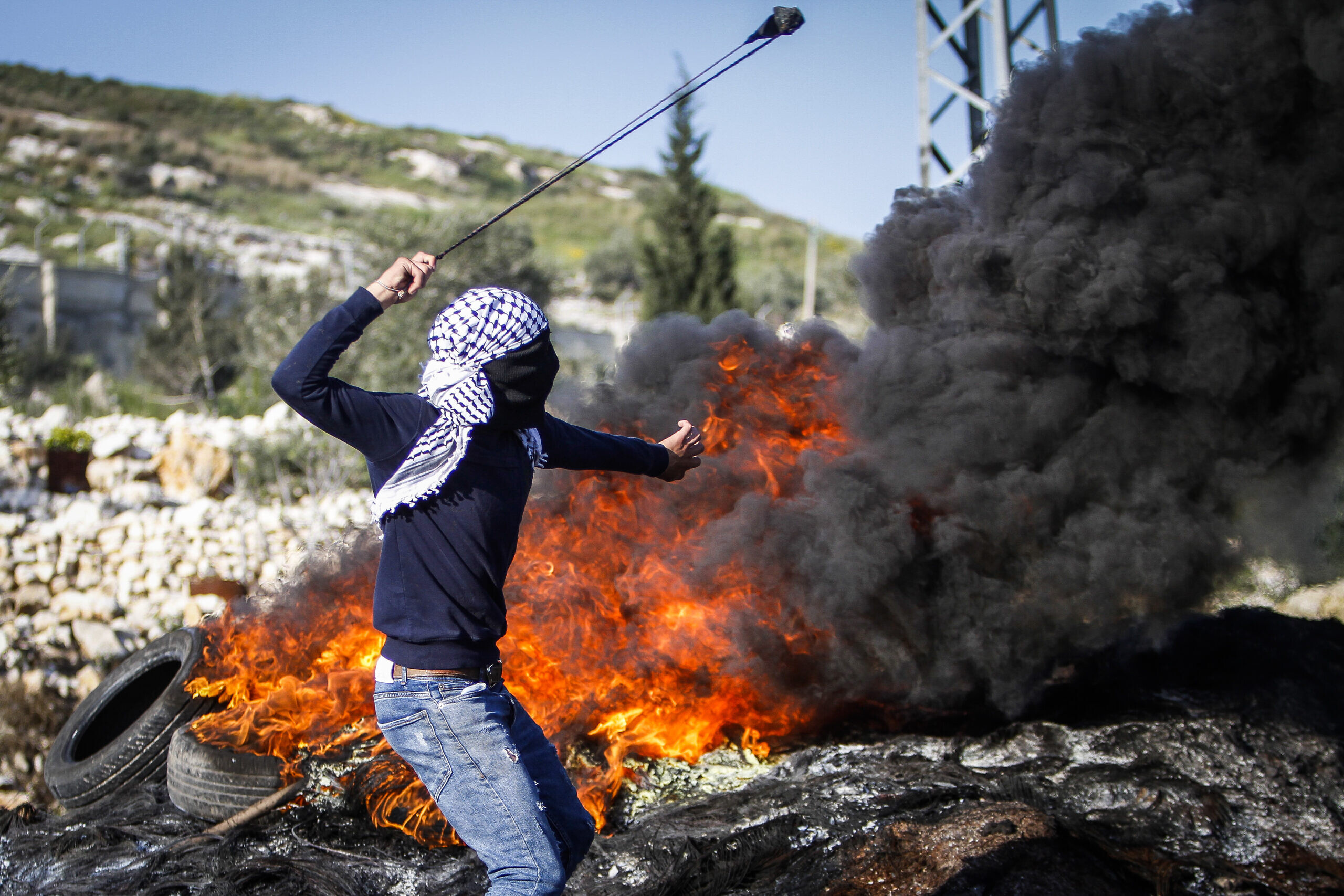 A Palestinian youth launches rocks at Israeli security forces during a protest in the village of Kfar Qaddum, near the West Bank city of Nablus on March 13, 2021. Photo by Nasser Ishtayeh/Flash90.

Asher and Kuperwasser agreed that one of the reasons that the courts issue lenient sentences is due to the youth of those committing the crimes. “The courts aren’t looking at the punishment as a deterrence measure. They say, ‘Oh, you are a student, I want to help you to get back to school. So you will get just two to three months, and then you can get on with your life. The problem is that everybody around sees that, and they also throw stones,” said Asher.

“Up until now, you pay very little, if at all, and you gain a lot because you will be seen by your peers, by your entire village, as a hero,” added Kuperwasser.

He stressed that one of the causes of the stone-throwing phenomenon that should not be lost in the discussion is ongoing incitement by the Palestinian Authority geared towards Arab youth. “Textbooks are just getting worse and worse. No wonder you have more people carrying out these kinds of attacks,” he said.

“The Palestinians indoctrinate their children that they are in some sort of ongoing battle against the Zionists. … They’re telling them that the best tool to fight against Zionism is what they call popular resistance,” he said.

More recently, they have added the idea of “ ‘peaceful popular resistance.’ In their understanding, ‘peaceful’ includes stone-throwing, Molotov cocktails, and sometimes stabbings and car-rammings.”

Kuperwasser said that if he were to produce a plan to confront stone-throwing, he would hold the P.A. accountable for its incitement, enforce the laws currently on the books and introduce still tougher sentencing to improve deterrence.

The likelihood that the recent Knesset bill will pass seems dubious given that Shitrit, who introduced the bill, sits in the opposition. However, Asher is optimistic, pointing to the Citizenship Law that seeks to reduce the number of Palestinians gaining Israeli citizenship through marriage. It first suffered a defeat but has since been resuscitated with support from both opposition and coalition members.

“We think that eventually they will come to their senses and understand this is not a political bill. Open the newspaper, and every day you see another incident. The reality is tough for people who live there,” he said.