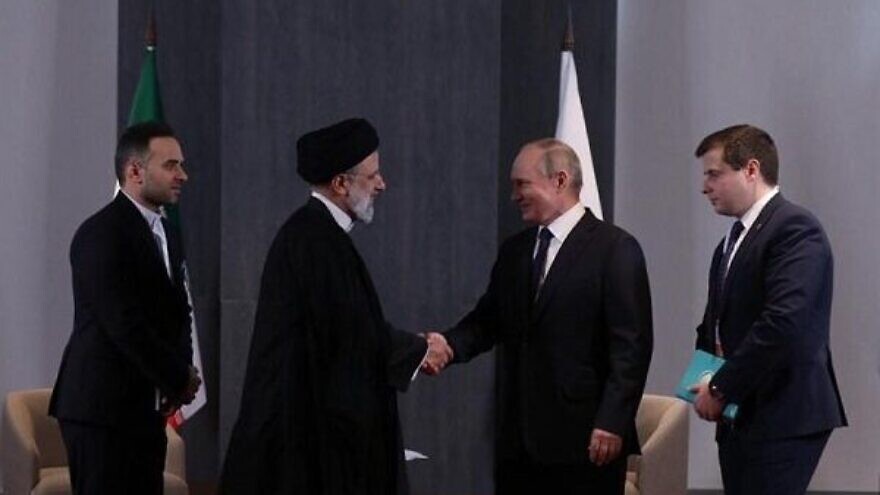 (September 20, 2022 / JNS) Moscow’s struggle to overcome its isolation from the West has led to tighter ties with governments that are also at odds with the West, such as Iran, something that has created concern in Jerusalem.

“It is important for the Iranians to show that they have alternatives to the West. This is why they are improving relations with Russia,” said Meir Javedanfar, a lecturer at Reichman University in Israel and a nonresident scholar at the Middle East Institute in Washington.

“The Iranians think that strengthening ties with Moscow will improve their hand in negotiations over the nuclear program,” he added.

And from Moscow’s perspective, the relationship serves to show Russia is not diplomatically isolated. It also provides Russia with Iranian drones, explained Javedanfar.

But Russia has experienced “many malfunctions” with drones purchased from Iran for combat in Ukraine, a U.S. administration source said in August. The official, who spoke on condition of anonymity, shared U.S. assessments according to which Russia acquired Iranian-made Mohajer-6 and Shahed-series unmanned aerial vehicles (UAVs).

In the latest evidence of growing ties between the two countries, the U.S. Commerce Department announced Monday that three Iranian cargo planes serving Russia will be added to a list of aircraft suspected of violating U.S. export controls under the Biden administration’s sanctions.

In addition, Russian President Vladimir Putin met with his Iranian counterpart, Ebrahim Raisi, at a summit of the Shanghai Cooperation Organization in Uzbekistan last week as Tehran signed a memorandum of obligations to join the organization. 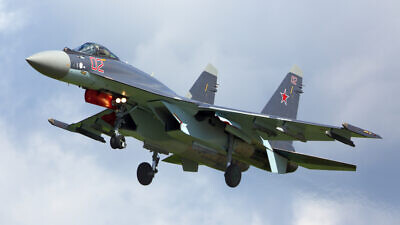 A Sukhoi SU-35 supersonic fighter jet lands at Kubinka Air Base near Moscow in 2015. Credit: Fasttailwind/Shutterstock.

Russia and Iran are moving closer in the military, economic and political realms. Of course, the fact that they hold opposing interests and mutual suspicion is still there, but the two countries don’t seem to have better options.

Russia is culturally Christian and closer to the West and also deals with its own homegrown Islamists and does not identify ideologically with Tehran. However, the two countries help each other in their isolation from the Western powers. China is also a superpower that both are trying to draw closer to.

“Tehran also has its eyes on Russian military hardware after the expiration of the U.N. arms embargo on Iran in October 2020 under the terms of UNSCR 2231, which endorsed the Iran nuclear deal,” added Brodsky.

“Iran seeks the Russian Sukhoi Su-35 fighter jet. With Iran supplying drones to the Kremlin and the Ukraine war changing the geopolitical situation, Russia may be more open to supplying Iran with such equipment,” continued the Middle East analyst.

The military and technological exports to Tehran would sound a red alarm in Jerusalem, and diplomatic measures would be used in an effort to halt them.

Jerusalem has been trying to balance its relations with the West and Ukraine with Russia, which has a robust military presence in Syria. The growing ties between Iran and Russia worry Israel because of the diplomatic backing and military aid it could give Tehran.

However, Israel also benefits from the fact that Moscow is increasingly focused on Ukraine, not Syria.

As to Israel’s concern, Brodsky said, “I think Israel is eyeing the diversion of Russian resources from Syria to Ukraine. This potentially opens Iran to increase its maneuvering in Syria.”

However, Israel also has an opportunity now that Russia has removed one of its S-300 air defense batteries from Syria for use in Ukraine. “That will help Israeli operations targeting Iran-backed entrenchment and arms transfers in Syria,” he said.

Putin signed a new Maritime Doctrine on July 31, which reorients Moscow’s foreign policy to the Arctic, Asia and the Middle East, notes IDF Lt. Col. (res.) Daniel Rakov in a recent paper for the Jerusalem Institute for Strategy and Security.

Moscow’s isolation has led it to seek stronger alliances, with the new doctrine calling for stronger ties with Syria, which houses a Russian naval base in Tartus.

Rakov thinks Israel could use Saudi Arabia “as a possible counterweight to Iran.”

“Due to the importance of oil prices for Russia, Israel may utilize its leverage to prevent Russia from allying with Iran by exerting pressure on the Kremlin through the Sunni Gulf monarchies,” he said.

Israel would like to stall the growing Iranian-Russian ties indirectly if possible so as not to evoke Putin’s wrath. Still, its options are limited, and it may have to rely on U.S. sanctions to hinder trade and cooperation between the two countries.

Russia’s diminished participation in the Syrian arena and increased focus on the Ukraine war favor Israel. However, as mentioned in its recent maritime paper, Moscow sees strategic significance in Syria, so Israel cannot rest easy.