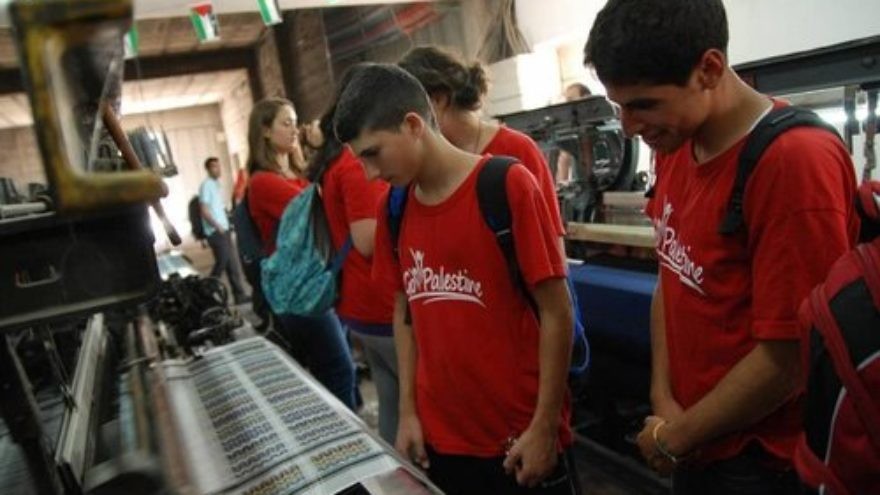 (August 9, 2017 / JNS) Two prominent U.S. senators are raising questions about an American-funded school in Ramallah that is running an extremist summer camp for Palestinian teens from around the world, many of them Americans.

The controversial summer program, called “Go Palestine,” is run by the Ramallah Friends School, a 148-year-old Quaker institution in the Palestinian Authority’s de facto capital. Its stated mission is to provide Palestinian teens from abroad with “introductions to Palestinian culture, cuisine, life and work, and the Arabic language.”

But in addition to traditional summer camp fare, Go Palestine participants are immersed in anti-Israel films and lectures by militants, some with terrorist connections.

The U.S. Agency for International Development (USAID) gave the Ramallah Friends School $800,000 in 2016 to make various improvements to its facilities. USAID also sent the school $700,000 in 2015, $900,000 in 2014 and similar amounts in prior years, through its “American Schools and Hospitals Abroad” program. The school is owned and operated by the Indiana-based Friends United Meeting, one of the major divisions of the Quaker movement.

U.S. Senate Minority Leader Chuck Schumer (D-N.Y.) said the evidence gathered by JNS.org concerning Go Palestine is “disturbing” and that USAID “must immediately investigate it.” Schumer added, “If true, this school should be cut off because entities that receive USAID should be teaching about democracy and coexistence—not intolerance or extremism.”

Sen. Ben Cardin (D-Md.) is a longtime supporter of USAID’s assistance to overseas schools, but “the allegations described are quite concerning” and Cardin “has reached out to USAID for an explanation,” a spokesperson for the senator told JNS.org.

Malcolm Hoenlein, executive vice chairman and CEO of the Conference of Presidents of Major American Jewish Organizations, told JNS.org, “I endorse the calls by Senators Schumer and Cardin for an investigation to make sure that no U.S. government funds are being used, directly or indirectly, to support a camp that promotes BDS or other anti-Israel extremism.”

A USAID spokesperson told JNS.org the agency “has not provided any support to the ‘Go Palestine’ program.” USAID’s grants to the Ramallah Friends School, which hosts and operates Go Palestine, were “for construction and durable commodities,” including improvements to the buildings on campus. The USAID spokesperson did not address the fact that Go Palestine participants make use of those buildings on various occasions each summer.

The three-week Go Palestine program, which began in the summer of 2011, accepts 40-50 campers each year. It costs $2,150 per camper, plus airfare. Although the camp has not released a complete breakdown of the participants by nationality, the “camper profiles” shown on its website from 2011-2013 indicate Americans were the single-largest contingent. Other campers hailed from the U.K., Saudi Arabia and elsewhere. Several came from what the website calls “Haifa, Palestine.”

Haifa is located within pre-1967 Israel, not in the disputed territories. The camp’s use of “Haifa, Palestine” is one of the many indications that rejection of Israel’s right to exist is an integral part of the camp’s ideology.

The camp’s own descriptions of each year’s activities from 2013-2017 report that the teens are shown films such as “Occupation 101” and “Jerusalem: The East Side Story,” which depict Israel as a racist, savage oppressor. A panel on “Youth Activism and Engagement in Palestine” featured representatives of “the Love Under Apartheid Campaign [and] the BDS movement.” Officials of a group called “Right to Education” explained to the campers that all Israeli universities should be boycotted, since they are part of “the structure of systemic oppression.”

This summer’s campers heard “an inspiring lecture from Nasser Ibrahim,” whom the camp describes as “a renowned journalist, author, and teacher.” Ibrahim has been associated with the Popular Front for the Liberation of Palestine (PFLP) terrorist group. He has served as editor of the PFLP weekly publication El Hadaf, and is deputy director of the Palestinian Union of Health Work Committees, which USAID has characterized as a PFLP affiliate.

The 2016 and 2015 campers visited “the monument erected for the Martyrs of Birzeit.” The monument, on the campus of Birzeit University near Ramallah, memorializes students who were killed while engaging in violence against Israelis.

The 2015 campers met in Bethlehem with “ex-prisoners,” and heard about their “experience in the Israeli occupation jails.” Palestinian “ex-prisoners” often are convicted terrorists.

Go Palestine’s directors declined to respond to requests from JNS.org to identify the crimes for which those ex-prisoners were jailed, nor did they respond to inquiries concerning other aspects of their summer program.

The online brochure for Go Palestine promises that it “will change your child’s life forever,” and video blogs on its website illustrate the impact the program has had on its participants. A camper named Nidalia Nazzal, from California, declares, “Now I appreciate all the people fighting for freedom.” Sama Sarraj, a teenager from Maryland, pledges that her “top priority” will be to “educate people and raise awareness” about “the situation of the Palestinian people.”

Role of the Quakers

The activities of the Go Palestine program could further complicate the already strained relations between the Quaker leadership and the American Jewish community. The Quakers’ public policy division, the American Friends Service Committee (AFSC), has endorsed the BDS movement and sponsors training programs for boycott activists.

Middle East scholar Asaf Romirowsky, who has written extensively about Quaker attitudes toward Israel, told JNS.org it is “hypocritical” for Quaker leaders to claim to be pacifists and advocates of coexistence “while their Ramallah school is training teenagers from around the world to hate Israel and idolize terrorists.”

JNS.org asked Shan Cretin, general secretary of AFSC, if Go Palestine’s activities are consistent with AFSC’s mission statement, which emphasizes “active nonviolence and the transforming power of love.” Cretin replied, “There is no connection between AFSC and the Ramallah Friends School,” which runs the camp.

According to AFSC’s website, however, Cretin will be succeeded next month as general secretary by Joyce Ajlouny, who has been head of the Ramallah Friends School for the past 13 years. Jennifer Berg, the director of AFSC’s “Palestine-Israel Program,” was formerly a teacher at the school.