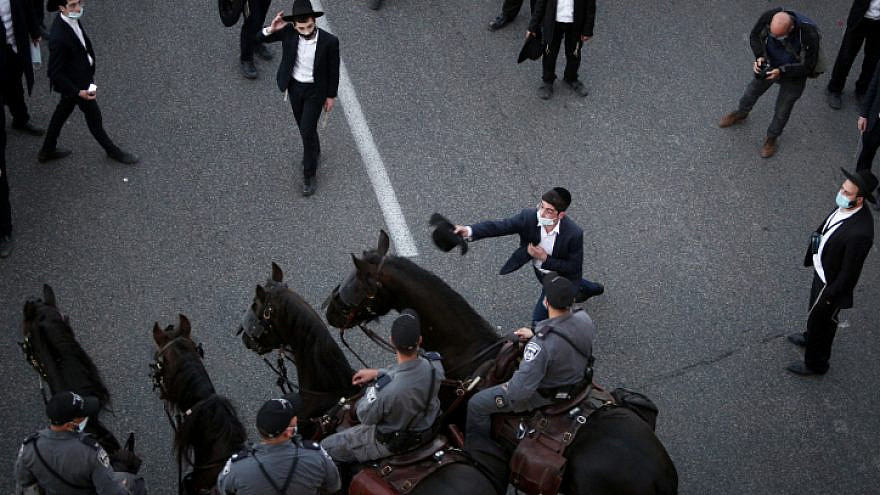 Ultra-Orthodox Jews in Bnei Brak clash with police as they protest against the arrest of haredi Jewish men who failed to comply with their army draft, Dec. 27, 2020. Photo by Noam Revkin Fenton/Flash90.
Spread the word.
Help JNS grow!
Share now:

(January 24, 2021 / Israel Hayom) At least six people have been arrested in Israel following clashes between police and haredi extremists in Bnei Brak on Thursday night in which three officers suffered light wounds.

“We will act with a heavy hand against the lawbreakers, first and foremost against whoever lifts his hands against our police officers,” he said.

The incident began when dozens of haredi yeshivah students who had gathered in the city in violation of public health directives spotted Israeli police officers traveling in a civilian vehicle. The crowd gathered around the vehicle, hurling rocks, smashing its windshields and puncturing its tires. The rioters then attempted to open the car doors, while the officers called for backup. Three police officers were lightly injured.

Israel is in the midst of its third national coronavirus lockdown, which was extended last week until Jan. 31. Non-essential businesses have been shut down, as has the country’s education system, including the haredi schools. This has sparked ongoing resistance from some in the ultra-Orthodox community, despite most in the sector following leading rabbis’ calls for Health Ministry directives to be followed.

Israeli Public Security Minister Amir Ohana said “the savage violence we saw [Thursday] night in Bnei Brak is a heinous crime which will not pass quietly. The response will come—and fast.”

Interior Minister Aryeh Deri said: “The terrible violence [Thursday night] in Bnei Brak by several rioters against police officers who were there on duty to enforce the lockdown is appalling and outrageous. The rioters must be arrested and prosecuted to the full extent of the law. We must follow safety guidelines and save lives.”

“I express shock and disgust at a wild mob dressed as haredim who physically harmed Israeli police officers. Barbarism of this kind has no place in our camp and in society. I expect law enforcement to bring these perpetrators to justice. They are not haredim,” he said.

Knesset Constitution, Law and Justice Committee chairman Yakov Asher (United Torah Judaism) said, “All forms of violence must be denounced and it needs to be made unequivocally clear that this is not our way.”

However, he added, “With that, there’s no hiding the sense that the police is working under pressure from the media, and instead of using sound judgment is being dragged into street fights that don’t achieve [the goal] of minimizing public gatherings, but rather the complete opposite, and that’s a shame.”

Former Justice Minister MK Ayelet Shaked (Yamina) tweeted: “The location is no longer relevant. Bnei Brak, the Negev or the Galilee, Israel is in the midst of a severe crisis of governance and non-functioning leadership. The neglect and lack of control stem from a weak and detached government. The time has come for new leadership.”

Netanyahu called on “all Israeli citizens, without exception” to follow the Health Ministry’s safety guidelines.