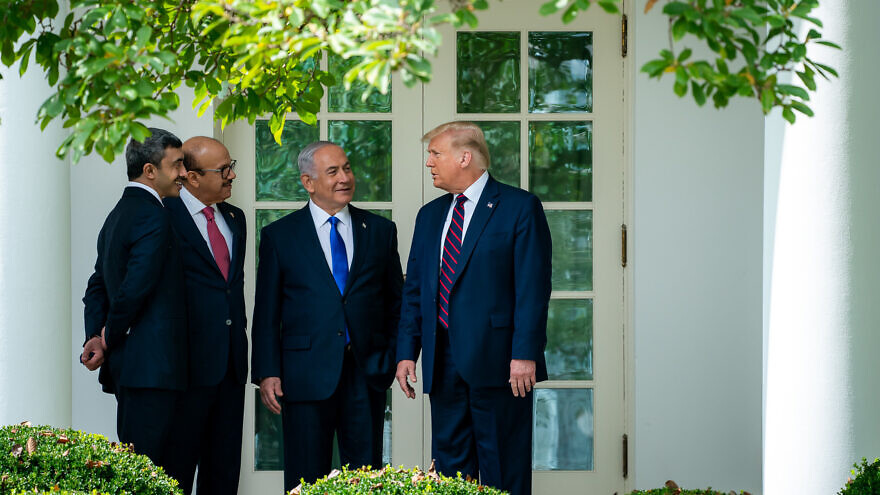 (October 12, 2020 / Israel Hayom) A study published in the United Arab Emirates over the weekend shows growing support for establishing ties with Israel in some Arab countries.

The poll, conducted by U.S.-based Zogby Analytics, found increased levels of support in four Arab states for normalizing relations with Israel and that the driving force behind this shift is a desire to stabilize the political and military situation in the Middle East.

According to Sky News Arabia, the poll included 3,600 Arab respondents living in Saudi Arabia, the UAE, Jordan, Egypt and the Palestinian Authority, and was supervised by James Zogby, founder and president of the Arab-American Institute.

Sky News Arabia was the only media outlet reporting on the results of the survey.

According to the survey, 41 percent of Jordanians and Saudis, along with 42 percent and 56 percent of the residents of the UAE support normalization agreements between Israel and the Arab world, citing primarily regional stability and economic prosperity. In sharp contrast, the poll said that 69 percent of Palestinians opposed normalization.

A recent study by Israel’s Strategic Affairs Ministry, however, found that overall, Arab social media users were less enthused about the Abraham Accords than the UAE poll might suggest. The ministry’s data suggests that a whopping 90 percent of all Arabic social media discourse on the recent rapprochement between Israel, the UAE and Bahrain is negative.

The report shows that between August and September, 95 percent of Arabic social-media posts commenting on the issue slammed the UAE with 45 percent of the posts calling the agreement a “betrayal.”

Other allegations against the UAE focused on the ban on signing agreements with the “Zionists” (27 percent), Abu Dhabi’s “hypocrisy” and its “capitulation” to the United States (5 percent).

But not all was negative: 61 percent of the posts favoring the deal cited security benefits, 33 percent noted economic potential, and 6 percent said the accords simply made an existing situation official.

Israeli Strategic Affairs Minister Orit Farkash-Hacohen said of the study’s findings that “the analysis of the discourse on Arabic social media with respect to the recent normalization agreements signed with the Gulf states attests to an organized attempt to create negative discourse by those who oppose the peace process.”

Correction: The poll numbers originally included in this article were incorrect and have been updated.