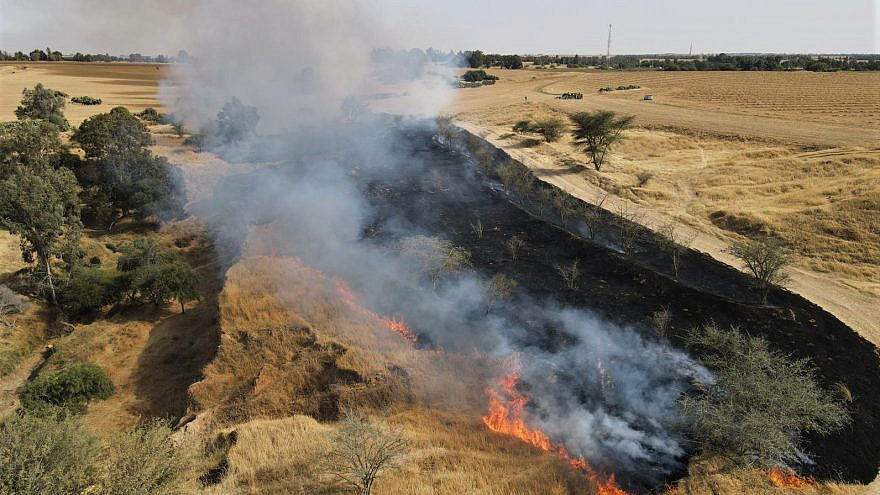 Incendiary devices launched from the Gaza Strip into Israeli communities along the border resumed on May 4, 2021. Credit: JNF.
Spread the word.
Help JNS grow!
Share now:

(May 7, 2021 / JNS) Incendiary devices launched from the Gaza Strip into Israeli communities along the border resumed on Thursday with firefighters currently battling blazes in fields surrounding Kibbutz Kissufim in southern Israel.

He noted that many of the fields affected by the terror-lit fires were about to be harvested. “The fields mainly hit were wheat. In addition to limiting the loss of crops, we were also able to save many wildlife animals trapped by fire,” he said.

Two of the fires ignited parts of the Be’eri forest, and another four affected the Kissufim forest, and two nature reserves on the border of Israel and Gaza, according to a spokesperson for the Jewish National Fund.

Through JNF-USA’s Fire & Rescue Task Force, the U.S.-based organization has helped firefighters reduce their average response time from 15 minutes to seven minutes. In turn, this has helped reduce the number of acres burnt from 10,000 to 1,500 acres.

JNF-USA Fire & Rescue co-chair Mark Egerman said “while we cannot prevent these terror balloons being flown into Israel, we can support Israel’s firefighters with everything they need to defend the communities within the Eshkol region and Gaza envelope—and that’s exactly what we’re doing.”