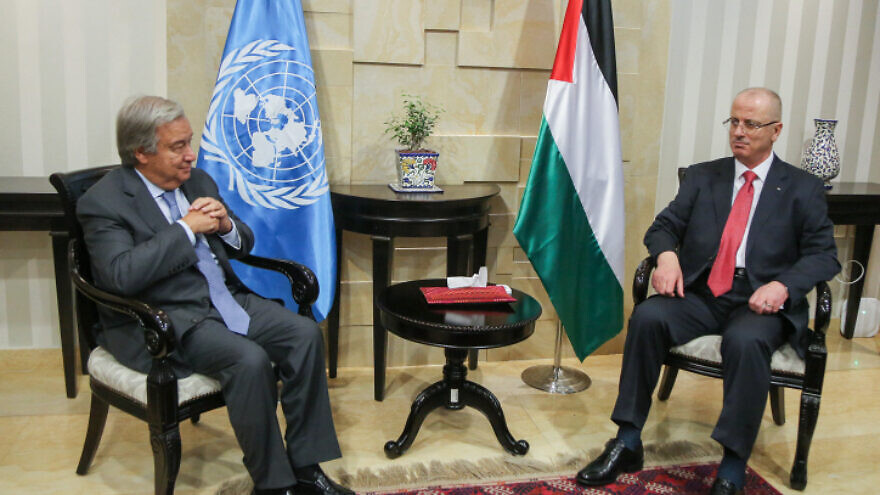 (June 24, 2020 / JNS) In a report to the United Nations Security Council, U.N. Secretary-General António Guterres urged Israel to drop plans to extend sovereignty to parts of Judea and Samaria, saying it would be a “most serious violation of international law.”

The report, which was made public on Tuesday, comes ahead of the council’s biannual meeting on the Israeli-Palestinian conflict, set for Wednesday.

In the document, Guterres states that he is “gravely concerned” by Israel’s sovereignty plan, which if implemented “would constitute a most
serious violation of international law, including the Charter of the United Nations.”

He goes on to write that for Israel to extend its sovereignty to the territories in question “would be devastating to the two-State solution and threaten efforts to advance
regional peace and our broader efforts to maintain international peace and security.”

The Israeli move, he continues, “would effectively close the door” on a resumption of Israeli-Palestinian negotiations and “destroy” the two-state solution. This, he said, “would be calamitous for Palestinians, Israelis and the region. I cannot overemphasize the urgency of reversing this dangerous trajectory.”

“I call upon Israel to abandon its annexation plans,” wrote Guterres. “I urge all stakeholders—Israelis, Palestinians, regional States and the broader international community—to take action now that enables the parties to step back from the brink and begin the process of re-engaging in a dialogue that will halt unilateral action, chart a positive way forward and avoid a descent into chaos.”

According to a statement put out by Israel’s Foreign Ministry, “Ashkenazi asked Christodoulides for Cyprus to act as a moderating voice in discourse with European countries.”