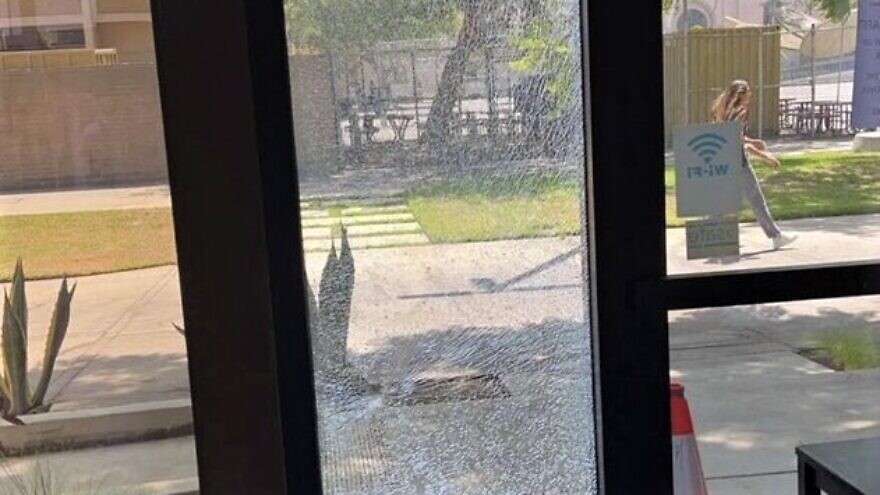 (August 25, 2022 / JNS) On the same day that University of Southern California president Carol Folt accepted recommendations from the Advisory Committee on Jewish life on ways to combat anti-Semitism on campus, a window at the USC Hillel was discovered shattered when employees arrived for work.

In a letter to the school community on Tuesday addressing the advisory recommendations, Folt wrote: “The committee’s recommendations give us tangible direction across nearly every aspect of Jewish life at USC, including experiences of anti-Semitism, university processes and policies, the Jewish experience on campus, and education and training.”

“The next phase is implementation,” she said. “While many of these recommendations are already underway, we will work to implement them as quickly as we can.”

In a statement to students and supporters, Dave Cohn, the executive director of USC Hillel, addressed the release of the advisory committee’s recommendation and the broken window, noting that “the building was not occupied when this occurred.”

“At this time, we do not yet know the motives or identities of any involved, and we are not prepared to characterize the incident. We do not know whether the damage was accidental, a random act of criminal vandalism or if it specifically targeted our facility,” he wrote. “That said, within a half hour of opening our building this morning, we were working closely onsite with the USC Department of Public Safety to begin an investigation.”

Cohn, who was a member of the Advisory Committee on Jewish Life, said the report sent to Folt included input from students, faculty and staff, as well as organizations such as the Jewish Federation of Greater Los Angeles, the American Jewish Committee and the Anti-Defamation League.

“The committee,” he went on to say, “will now become a standing body charged with monitoring the ongoing implementation of these recommendations and responding to new issues as they emerge.”

The recommendations include responding quickly and publicly to anti-Semitic incidents; reiterating the university’s opposition to the BDS movement; showcasing the work that is already being done by Jewish organizations and individuals on campus; and “explore the possibility” of creating a full-time director of Jewish life, “similar to positions at other peer universities.”

Tammi Rossman-Benjamin, director of the Amcha Initiative, said, “These are all important recommendations that, if faithfully implemented, will improve the campus climate for Jewish students and ensure that all USC students, regardless of identity, will be equally protected from behavior that threatens their safety or limits their ability to fully participate in campus life.”

In its report, the advisory committee did not define anti-Semitism, noting that participants were divided on the issue. The report noted that several members said it’s hard to combat such a scourge without defining it; some had recommended they adopt the International Holocaust Remembrance Alliance’s (IHRA) working definition of anti-Semitism. Other members argued that defining anti-Semitism would “limit the university’s ability to proactively address it as a complex, evolving, multifaceted, global phenomenon.”

Liora Rez of StopAntisemitism.org, whose group is currently undertaking a survey of Jewish students at more than two dozen schools about anti-Semitism, told JNS that her group is “extremely disappointed” that USC will not be adopting the “IHRA definition of anti-Semitism after repeated instances of Jewish bias. By adopting and upholding IHRA, only then will USC rid itself of Jew-hatred that has plagued their school.”

In late July, the U.S. Department of Education launched an investigation into allegations that the university did not address the hostile campus environment facing a pro-Israel student who was a member of the USC student government.