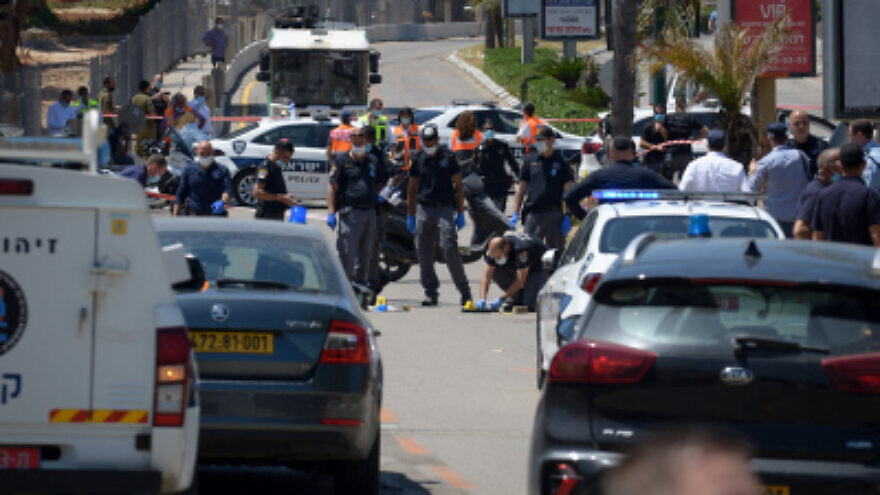 Israeli police and forensic teams at the scene of a suspected terrorist attack in Kfar Saba in which a 62-year-old woman was wounded, on April 28, 2020. Photo by Gili Yaari/Flash90.
Spread the word.
Help JNS grow!
Share now:

(April 28, 2020 / JNS) A 62-year-old Israeli woman was wounded in a suspected terror attack in Kfar Saba on Tuesday, as Israel marked its Memorial Day for fallen soldiers and victims of terrorism.

The alleged assailant, a masked 19-year-old Palestinian, stabbed the woman around 1 p.m. outside a shopping mall on Galgalei Haplada Street, according to Ynet.

A civilian who works as a security guard shot and seriously wounded the attacker before police arrived on the scene and took him into custody, according to the report.

The victim was taken to Meir Medical Center in the city, according to the Magen David Adom rescue service. Police believe that attack was nationalistically motivated.

“When we arrived at the scene, we saw a woman aged about 62 who was fully conscious and lying on the road,” said MDA paramedic Elazar Habani, according to the report. “We performed a preliminary examination and saw that she was bleeding from her injuries. We performed life-saving medical care that included stopping the bleeding and evacuated her to hospital while continuing treatment and reported to the doctors who were waiting for us.”