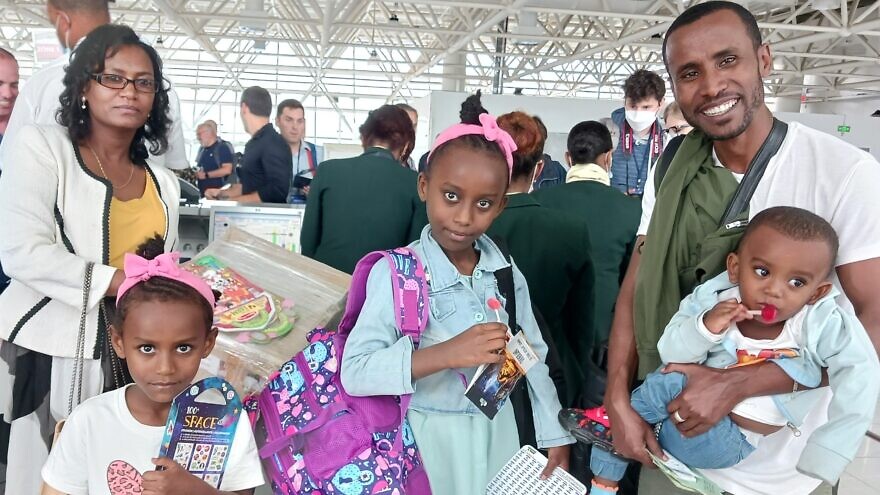 A family waits to board the flight in Addis Ababa on the way to Israel. Credit: Jewish Federations of North America.
Spread the word.
Help JNS grow!
Share now:

(September 16, 2022 / JNS) Dozens of community leaders from Jewish Federations across the United States and Canada, as well as senior Jewish Agency for Israel officials, spent three days in Ethiopia meeting with families awaiting immigration to Israel and learning about aliyah and absorption needs.

The tour concluded on Wednesday morning with an emotional flight for 209 olim accompanied by the delegation, followed by a joyous celebration at the airport attended by Minister of Aliyah and Absorption Pnina Tamano-Shata.

The delegation will also visit Jewish Agency for Israel housing and educational programs funded by Federations to assist new immigrants in assimilating into Israeli society.

President and CEO of Jewish Federations of North America Eric Fingerhut and chairman of the Executive of the Jewish Agency for Israel Maj. Gen. (res.) Doron Almog also took part in the mission and flight.

“The true heroes of the Ethiopian aliyah are the olim themselves who have waited so long for this moment, yet never lost ‘Hatikvah’—the hope—that they would one day reach the Land of Israel,” said Fingerhut. “It is a tremendous privilege to know that for decades our Federation system has played an instrumental role in the aliyah journey of these men, women and children, as well as in supporting their first steps in Israel.”

“This return to Ethiopia, together with our dedicated partners from Jewish Federations across North America, has been an overwhelming experience that highlights the strength of the unity of the Jewish people and the need for us to work together to reunite Ethiopian families in Israel,” said Almog.

In addition to the funding that Jewish Federations raise each year as part of their annual campaigns, Federations have launched an emergency campaign this year, raising $73 million to date for humanitarian aid for Ukrainian refugees, as well as a $9 million campaign to support aliyah from Ethiopia.