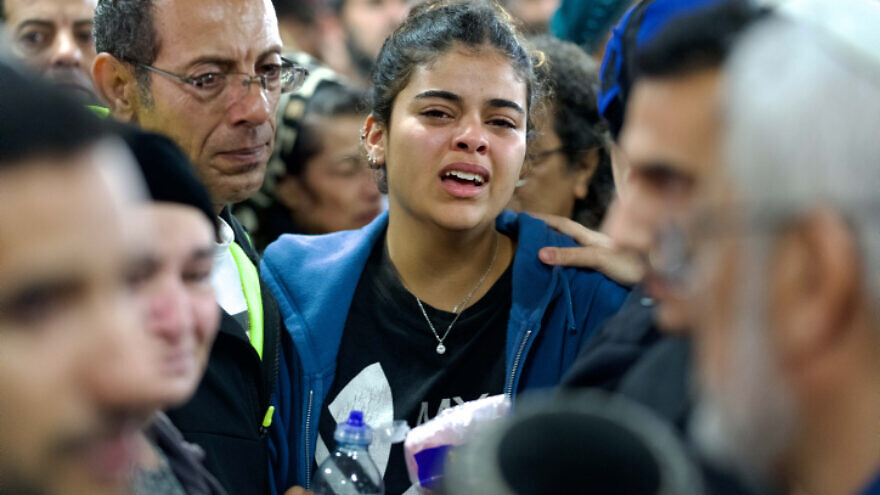 Mourners attend the funeral of 50-year-old Tamir Avihai at Ariel Cemetery in Samaria, Nov. 15, 2022. Avihai was killed when a terrorist rammed his car into him near Ariel earlier in the day. Photo by Erik Marmor/Flash90.
Republish this article
1050 WORDS
Spread the word.
Help JNS grow!
Share now:

(November 16, 2022 / JNS) The Israeli defense establishment is disturbed by the fact that the 18-year-old Palestinian terrorist who went on a deadly stabbing and car-ramming spree on Tuesday had a valid work visa from Israel.

While a rare case among the 130,000 Palestinians who have work permits to enter Israel or Israeli communities in Judea and Samaria, the fact that Mohammed Murad Souf, from Haris, a village southwest of Nablus, conducted a murderous terror attack before being shot dead in Ariel’s industrial zone will lead to meticulous reviews by the Israel Defense Forces and the intelligence community.

Before this attack, the IDF in Judea and Samaria, commonly known as the West Bank, was focused on taking down the Nablus-based Lions’ Den organization through a series of precise counter-terror raids that led to a reduction in shooting attacks by the group.

A decrease in the number of simpler attacks such as fire-bombings and rock-throwing was also recorded recently, an IDF source told JNS on Tuesday while noting that detecting an unorganized lone attacker like Souf is a serious intelligence challenge.

The fact that a civilian security guard at Ariel’s industrial zone fired in the air instead of shooting the attacker is also causing the IDF to consider new types of training programs for such personnel.

Ultimately, however, the defense establishment will need to fall back on its deterrent measure such as home demolitions and placing local closures on areas from where attackers come while seeking to avoid punishing the whole of the Palestinian population as part of a delicate balancing act.

The IDF already has 26 battalions stationed in Judea and Samaria—a very large number—as part of “Operation Break the Wave,” launched in March in response to a series of terror attacks, and it is unlikely that this incident will result in further deployments at this time.

“Our operations have had many achievements, and we were able to strike a balance between targeting terrorists and not targeting noncombatants. But when a Palestinian gets up and goes on a knife rampage, this means we will continue with arrests and home demolitions,” said the military source. “It is up to the Palestinians whether they will lead normative lives.”

According to Doron Matza, a specialist on Palestinian issues, Israeli Arabs, and Middle Eastern affairs, as well as a former senior official in the Israel Security Agency (Shin Bet), the past months have made it clear that a growing number of Palestinians are rejecting the deal that Israel has been offering them: economic well-being and stability in exchange for security quiet.

“I believe we are in an intifada situation, which is being denied in Israel,” Matza, a senior researcher in the Israel Defense and Security Forum (IDSF, known in Hebrew as Habithonistim) told JNS.

“If you look at the past year and a half, the security situation has been poor. This started before ‘Operation Guardian of the Walls’ [the aerial war with Hamas in Gaza in May 2021], and since that time we have been in an ongoing escalation which has many expressions—not only in Judea and Samaria but also in mixed Arab-Jewish cities in Israel,” he said.

“If you look at the full Palestinian and Arab system between the Jordan River and the Mediterranean, there are signs that the old order is falling apart. This was an order characterized by security stability based on a kind of political-economic-security deal—unwritten—between Israel and Palestinian elites,” Matza said.

This arrangement saw Israel provide a level of autonomy to Palestinians including the facilitation of Palestinian institutions that can pay salaries and provide status symbols to those—security forces and civilians—affiliated with and benefiting from the economic cooperation with Israel, he argued.

“Ideological ideals were essentially framed and put up on the wall as a poster that was saluted but which did not define the real experience on the ground, because the conclusion was that neither side can reach its ideological goal,” he added.

Yet this submersion of ideology for economic benefits has begun crumbling as an organizing principle, Matza said. “It has been collapsing over the past year. I wouldn’t say a full crash has happened, because the economic order is still present—one can see it most clearly, paradoxically, in Gaza, which is currently relatively quiet. But we see a very clear process of this system cracking over the past year,” he warned.

The cracks are being led by what he described as those on “the Palestinian periphery,” which he defined as “youths who do not exactly have a brilliant future, Fatah marginal elements, those on the geographic periphery in Judea and Samaria like Jenin, Nablus and Hebron, trying to take apart this order.”

Matza listed two motivations for their actions: their decision to prioritize a militant ideological identity over economic benefit, and their sense that they were left out of the old arrangement to begin with.

“The same ideology that was framed on the wall is now coming down. The terrorists are talking about identity, Palestinian honor, condemning Israel, and ideological fantasies of destroying the world they know to create a new one. They are the ones taking the system apart,” he said.

And so, Matza said, the decision by the terrorist on Tuesday to strike at the Ariel industrial zone is symbolic of a desire to “plunge a knife into a place where economic symbiosis between Israelis and Palestinians occurs.

“In the 1990s, Hamas conducted major terror attacks on border crossings between Gaza and Israel—the windows that let economic oxygen into Gaza. This is where they focused their attacks. They were motivated by the same thinking that motivates the current terrorism wave,” said Matza.

“This is a push-back to bring back ideology. It’s an intifada. In Arabic, intifada means a ‘shaking off,’ and they are shaking off the old order. Not all Palestinians are taking part, and the violence isn’t widespread, but the system is under challenge. Something much bigger is underway. There’s an intifada happening, and everyone is denying it because it’s uncomfortable to acknowledge it,” he said.