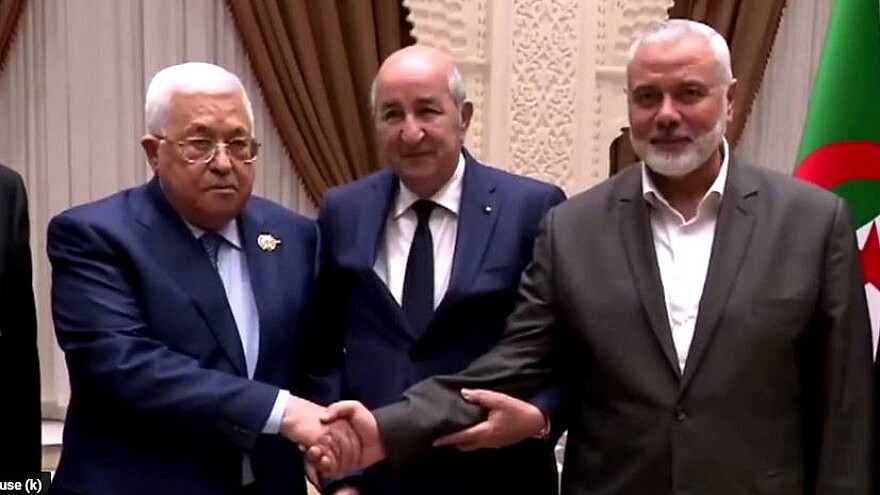 (July 6, 2022 / JNS) Palestinian Authority leader Mahmoud Abbas and Ismail Haniyeh, head of Hamas’s political bureau, shook hands in Algeria on Tuesday, but according to analysts, they would have preferred not to.

The two leaders last met in Qatar in 2016, and did so this time at the invitation of Algeria’s President Abdelmadjid Tebboune, in order to mark Algeria’s 60th Independence Day.

“They met not because they wanted to, but because the Algerians invited both of them,” Kobi Michael, a senior research fellow at Tel Aviv’s Institute for National Security Studies (INSS), told JNS. “They were forced in one way or another to shake hands. I think that this is a photo opportunity for the Algerians to show that they are able to contribute something.”

“Algeria, in comparison to the other Arab countries, is much more committed to the Palestinians,” said Michael, noting that Algeria hopes to position itself as an important player among both Arab and African states. Appearing to have influence over an important conflict is one way to do that, he added.

While neither Haniyeh nor Abbas wanted to be there, Abbas was the less enthusiastic of the two. “Abbas finds himself at an occasion where Haniyeh is placed on the same level,” said Michael, adding that this shows Haniyeh is recognized as a “legitimate Palestinian political leader, no less than Abu Mazen [Abbas’ nom de guerre].”

Although Hamas and P.A. leaders meet from time to time to show they are working towards political reconciliation, Michael said there is no chance reconciliation will actually happen: “The gaps between them are so deep and unbridgeable that Abu Mazen actually runs from any opportunity that would contribute to reconciliation.”

“Hamas is more popular than Fatah. And Hamas perceives itself as an alternative to the Palestinian Authority. Abu Mazen has a very clear understanding in this regard. In his mind, by meeting with Ismail Haniyeh, he actually legitimizes Haniyeh, and he strengthens him, and this is something that works against his political interests,” he said.

In pictures of the meeting, Abbas appears “frozen,” he noted, observing that “he doesn’t like the situation at all.”

Viewing the gap between the two in a broader regional context helps explain why reconciliation is a pipedream, said Michael. “Hamas is the Palestinian branch of the Muslim Brotherhood. That is one axis. The Palestinian Authority is part, or a component, of the Arab Sunni pragmatic axis, which is led by Egypt, Saudi Arabia and the Gulf countries. These two camps are in a very bitter and bloody competition for hegemony and influence in the region.”

‘Both believe in using violence’

Maurice Hirsch, head of legal strategies at Palestinian Media Watch (PMW), agreed with much of Michael’s assessment, telling JNS that “there is a lot of validity in the argument that neither one of the sides particularly wanted to speak to the other—that each sees the other as illegitimate.”

He also confirmed that the P.A. is deeply unpopular among Palestinians in Judea and Samaria. PMW published a study on July 4 comparing the results of June polls of the P.A. population over the last four years. It shows “steady and consistent growth” in support of Hamas. The June 2022 poll, conducted by the Palestinian Center for Policy and Survey Research (PCPSR), shows Hamas winning 55% of the vote to the P.A.’s 33% if an election were held.

“Hamas continues to gain strength within the Palestinian population on the one hand, and on the other hand, the level of dissatisfaction with Abbas personally is skyrocketing,” said Hirsch.

Hamas, in fact, won the last Palestinian legislative elections in 2006. Rather than hand over power, Abbas refused to join a Hamas-led government, after which Hamas took over the Gaza Strip by force and Abbas dismissed Hamas members of the P.A. regime. After a spasm of violence, the situation ended as it is today, with Hamas in control of the Gaza Strip and Abbas and his Fatah Party controlling P.A.-ruled areas of Judea and Samaria.

“That’s the real background. Both organizations simply want to be the organization that’s running the P.A.,” noted Hirsch. “There are no real ideological differences between Fatah and Hamas. That has to be clearly understood. Both seek the destruction of Israel. Both believe in using violence to achieve that.”

He said the U.S. administration’s efforts, not to mention the Israeli government’s, to prop up the Fatah-led P.A. will ultimately fail due to the anger of the Palestinians towards Abbas and his party. Hamas is waiting in the wings “to take over the P.A. mechanisms,” he said.

This is the reason Abbas has been working for the last few years to change the political system in order to ensure that elections will never happen, he added.

But, said Hirsch, “if elections are coming, then Hamas is coming.”