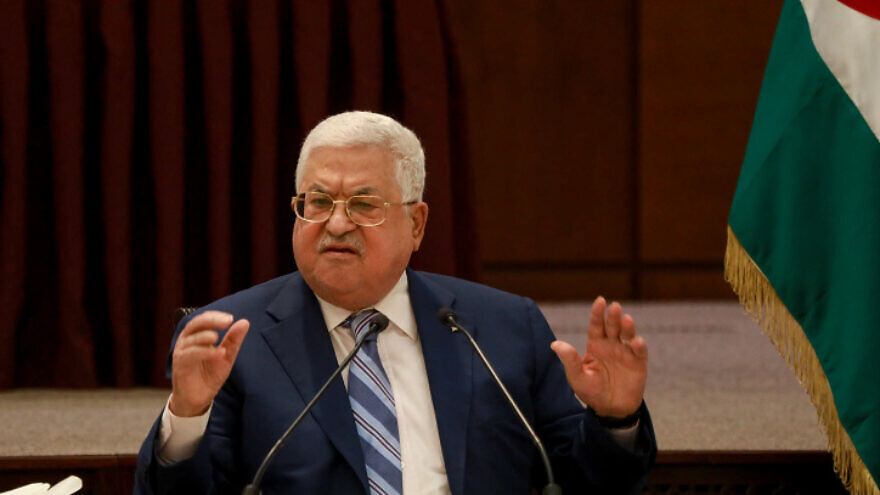 Abbas’s statements, made during a press conference with German Chancellor Olaf Scholz on Tuesday, were in response to a question about if he would apologize for the massacre of 11 Israeli coaches and athletes by Palestinian terrorists during the 1972 Summer Olympics—as the 50th anniversary of the event approaches.

According to the Associated Press, downplaying the Holocaust is a criminal offense in Germany, though a preliminary inquiry does not automatically mean a full investigation.

The Jerusalem Post reported that personally offended by Abbas’s statements, Berlin native Mike Delberg filed a complaint against the Palestinian leader on Wednesday.

“I am a Jewish German and the grandson of Holocaust survivors, whose grandfather fought on the front lines against the Wehrmacht,” wrote Delberg, according to the Post. “Mahmoud Abbas downplayed the most terrible time in the history of our country, and in the history of my family and religious community.”

“I am disgusted by the outrageous remarks made by Palestinian President Mahmoud Abbas … ,” Scholz said in a statement. “For us Germans, in particular, any relativization of the singularity of the Holocaust is intolerable and unacceptable. I condemn any attempt to deny the crimes of the Holocaust.”

Abbas also walked back his comments on Wednesday, calling the Holocaust the “most heinous crime in modern history.”

Abbas said in a statement to the Palestinian Wafa news agency that he did not intend to “deny the singularity of the Holocaust that occurred in the last century” and condemned it “in the strongest terms.”

“What is meant by the crimes that President Mahmoud Abbas spoke about are the crimes and massacres committed against the Palestinian people since the Nakba at the hands of the Israeli forces. These crimes have not stopped to this day,” the statement continued.

The police complaint is rankling Abbas’s supporters, including PLO Executive Committee Secretary General Hussein al-Sheikh, considered by many to be Abbas’s successor.

“Despite the presidential clarification statement issued after the press conference in the German Chancellery, some parties insist on the continuation of the campaign of incitement against the Palestinian president and attempt to reverse, falsify and distort the fact,” al-Sheikh wrote on Twitter. “And in light of our emphasis on condemning the Holocaust and not denying it, we affirm that our people have been and still are being subjected to the crimes of the occupation.”

Mahmoud Al-Habbash, an advisor to Abbas, defended Abbas’s denial of the Holocaust, saying during a televised address republished by MEMRI that the Israelis “want us to forget history, while they want the world to remember a history which is mostly forged, exaggerated, fabricated, with no basis in reality.”

According to Jerusalem Post Palestinian affairs correspondent Khaled Abu Toameh, national and religious groups in the Gaza Strip have condemned the German investigation, saying that the “crimes committed by Israel are not less than the crimes committed during [World War II] against the Jews and others.”