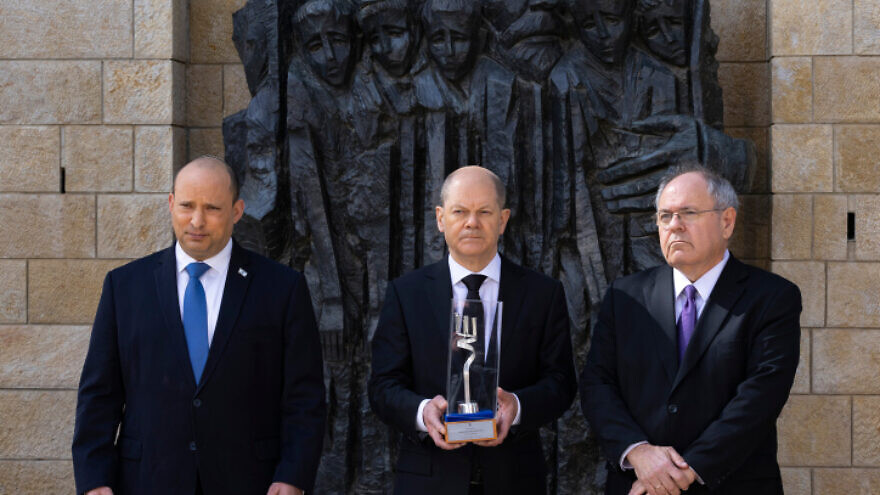 (August 18, 2022 / JNS) German Chancellor Olaf Scholz on Thursday reiterated his rejection of Palestinian Authority chief Mahmoud Abbas’ accusation that Israel has perpetrated “50 Holocausts” against the Palestinians, according to a statement from the Israeli Prime Minister’s office.

According to the statement, Scholz told Israeli Prime Minister Yair Lapid during a telephone conversation that it “was important for him to clarify this personally to the prime minister, as well as publicly.”

The two emphasized the importance of ties between Jerusalem and Berlin, and agreed to continue bilateral cooperation in various fields, the statement added.

On Tuesday in Berlin, Abbas following a meeting with Scholz claimed that Israel had perpetrated “50 massacres, 50 slaughters, 50 holocausts” against the Palestinians.

Abbas made the remarks after having been asked whether he intended to apologize to Israel and Germany in advance of next month’s 50th anniversary of the massacre by Palestinian terrorists of 11 Israeli coaches and athletes during the 1972 Summer Olympics in Munich.

The mention of the word “Holocausts” drew a grimace from Scholz but no immediate denunciation, according to the Associated Press. Prior to that, Scholz disagreed with Abbas’s assertion that Israel’s treatment of Palestinians constituted “apartheid.”

On Wednesday, Scholz took to Twitter to outline his position, writing: “I am disgusted by the outrageous remarks made by Palestinian President Mahmoud #Abbas. For us Germans in particular, any relativization of the singularity of the Holocaust is intolerable and unacceptable. I condemn any attempt to deny the crimes of the Holocaust.”

For his part, Lapid slammed Abbas’s comments as a “monstrous lie” and said that “history will never forgive him.”

Mahmoud Abbas accusing Israel of having committed "50 Holocausts" while standing on German soil is not only a moral disgrace, but a monstrous lie.

Six million Jews were murdered in the Holocaust, including one and a half million Jewish children.

History will never forgive him.

During their call on Thursday, Lapid and Scholz also discussed the Iranian nuclear issue, with the former reiterating Israel’s opposition to a return to the 2015 nuclear agreement, and the need for Europe to send a clear and unequivocal message that there will be no more concessions to Iran, according to the statement.

“Prime Minister Lapid added that Europe must oppose Iran buying time in negotiations. The two agreed to meet soon, as a reflection of the close relations between their two countries,” the statement concluded.