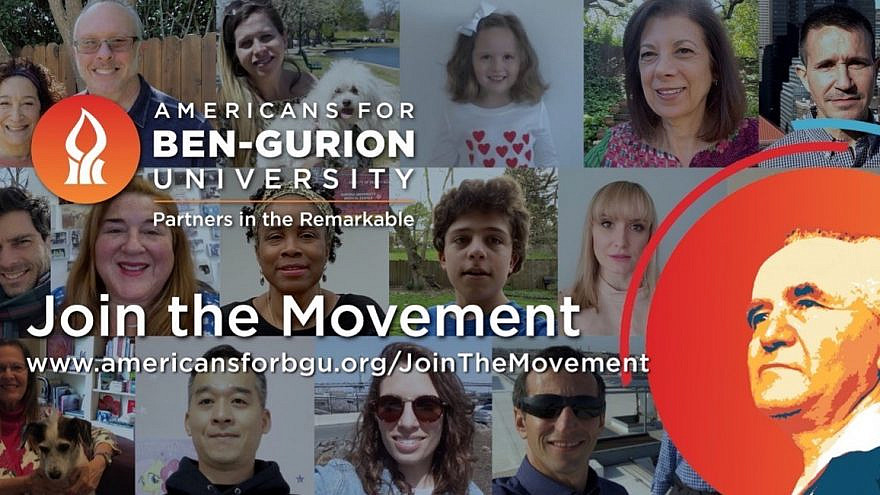 (April 26, 2021 / JNS) The U.S. fundraising arm for Ben-Gurion University of the Negev is officially changing its name and hopes by doing so to “spark a movement” in the way Jews in the Diaspora think about Israel.

Formerly known as American Associates, Ben-Gurion University of the Negev, the organization will now be called Americans for Ben-Gurion University. The name change was announced on Sunday during an online program “Celebrating the Remarkable.” The event honored longtime fundraiser Philip Gomperts; Toni Young, a philanthropist and volunteer; and Dr. Ruth Westheimer, who received an honorary degree.

“We’re excited about this. It’s officially a brand relaunch, but more than that, we are trying to spark a movement of Americans in the Diaspora in support of everything positive in Israel in the 21st century,” said Doug Seserman, chief executive officer of Americans for BGU.

That, he continued, is manifest by Ben-Gurion University being in an area of the Jewish state that is a catalyst for economic and regional development.

“BGU can be thought of as having the ‘Stanford effect,’ ” added Seserman, noting that like the famed university which helped give rise to Silicon Valley’s place a technological hub, BGU is a “major engine of growth for Israel.”

He notes that the area around the school—the largest employer in the region—is in the midst of significant development. Among the growth is the Advanced Technologies Park, bringing some 70 companies and 3,000 employees to the area, and the Project IDF Ascent to the Negev, which is responsible for the creation of two major military bases there.

Noting that the BGU is undergoing a capital campaign to finish its North Campus, which will double the school’s footprint in Beersheva, Seserman calls the university Israel’s “best-kept secret.”

“We are the fastest-growing research university in Israel,” he said. “We have 20,000 students, and that number is expected to rise to between 25,000 and 30,000 students in the next decade, and yet some people in the United States don’t know who we are.”

The new name, according to advocates, will more concretely connect the organization with people and action—standing “for” something and not merely reacting to it. As part of the launch, a new online campaign, “I am an American for Ben-Gurion University because … ,” asks people to post their reasons on social media using the hashtag #AmericansForBGU.

It will also reacquaint people with the university’s namesake, David Ben-Gurion, one of Israel’s founding fathers and its first prime minister, who retired to the desert and dreamed of creating a world-class educational institution in what he referred to as an “Oxford in the Negev.”

“Our job is to make sure people understand who he was, what his vision for Israel was as a Jewish, democratic state, and how the Negev was so important. And, ultimately, why there’s a university with his name and what we do,” said Seserman. “He was a really big thinker, and our job is to fulfill his vision today.”