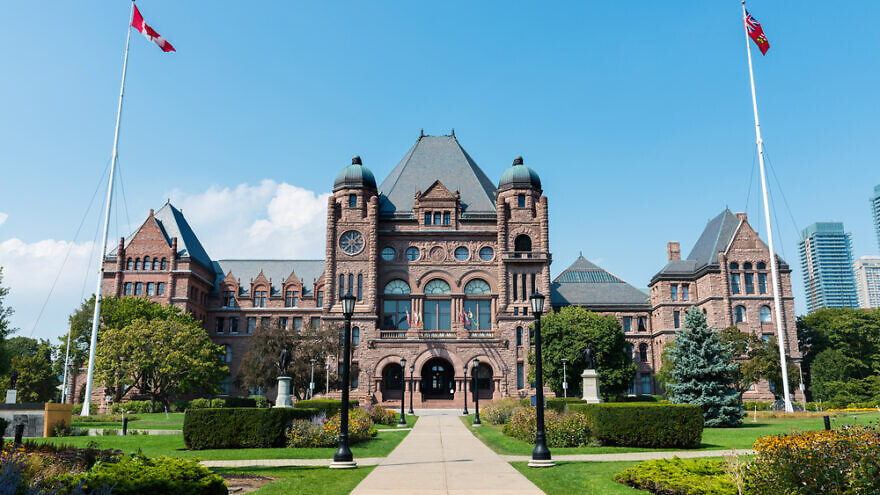 (July 6, 2021 / JNS) The government of Ontario, which includes the city of Toronto, is allocating $327,000 for teacher training and student support to combat anti-Semitism in the Canadian province.

“Anti-Semitism is a scourge and historic evil that must be eradicated from our schools and communities,” said Stephen Lecce, Ontario’s minister of education. “We will fight anti-Semitism with every tool available to us to ensure that Jewish students feel safe and supported in Ontario schools.”

The decision to allocate funding to combat anti-Semitism in schools comes after Canada has seen record-high incidents and attacks.

In May alone, B’nai Brith Canada recorded more than 250 incidents of anti-Jewish harassment, vandalism and assaults. It also follows the district’s investigation of a Toronto educator, Javier DaVila, a member of the board’s “gender-based violence unit,” who distributed a 51-page anti-Israel manual to teachers who requested it. The booklet discusses “Palestine” and “colonization” by Israel; includes suggested reading materials; and promotes BDS.

Noah Shack, vice president of the Greater Toronto division of the Centre for Israel and Jewish Affairs, said “anti-Semitism is an enormous challenge for schools across the province. Over the past several years, young Jewish children have witnessed rising levels of hate, both virtually and in person. Bullying, vandalism and hateful discourse targeting Jewish youth creates an unsafe learning environment and compels children to mask their Jewish identity. This is a reality that no Canadian should accept.”

The Toronto District School Board’s Human Rights Annual Report 2018-2020 recorded 31 incidents of anti-Semitism in 2019-20—more than double the number from the 2018-19 school year.

The funds will go to the Friends of Simon Wiesenthal Center for Holocaust Studies to underwrite two specific programs: “Unpacking Intolerance,” an equity and diversity training program for educators to “learn about dismantling systems of oppression and anti-Semitism in homes, schools and communities; and “Tour for Humanity Virtual Summer Camp,” which teaches students about human rights and dealing with injustice to exert positive change.

Sending participants from the Ontario school district to the programs is part of the government’s larger “Safe Return to Class Fund.” More than $6 million has been set aside to address anti-Asian racism, anti-Semitism, Islamophobia, support for indigenous people and other minorities, as well mental-health support for youth, families and teachers.

Other Canadian Jewish groups also praised the move but said more needs to be done.

“As a society, we must commit ourselves to uprooting all forms of hate and discrimination, starting in our schools,” said Shack. “Measuring the extent of the problem is an essential step. We continue our call for the Ministry of Education to require school boards to report annually on incidents of hate and discrimination. This data should include information on the nature of the bias, prejudice or hate that motivated the incident.”

Michael Mostyn, CEO of B’nai Brith Canada, said the government of Ontario “must make good on its commitment to fighting anti-Semitism. Anti-Semitic indoctrination in public schools is a grave threat to the Jewish community and must be treated as such.”