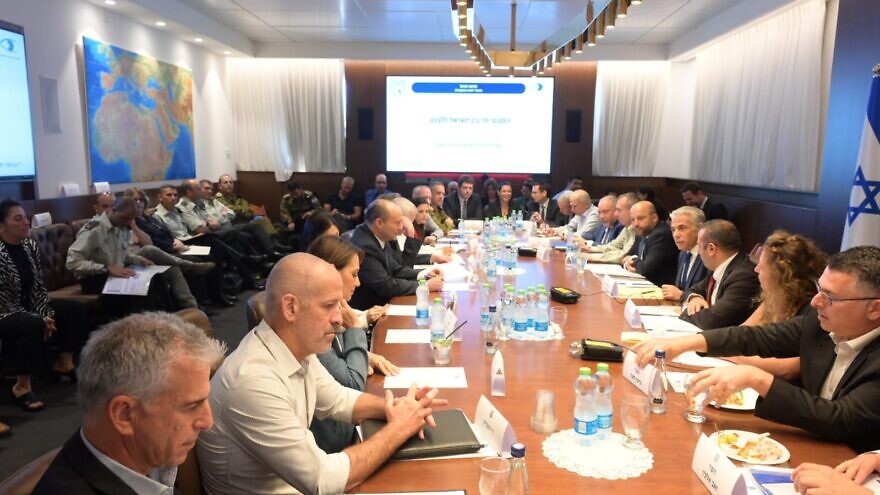 (October 14, 2022 / JNS) The recently struck Lebanon-Israel maritime border agreement may prove beneficial economically, but it will not benefit Israel’s security, analysts said during a policy webinar organized by the Jewish Institute for National Security of America (JINSA) on Thursday. Their take suggests that Israeli Prime Minister Yair Lapid overstated the benefits of the deal.

“I think economically it’s a good deal. Strategically, we might face many problems as a consequence of this,” said IDF Maj. Gen. (ret.) Yaakov Amidror, former Israeli national security advisor.

The deal settles a disagreement over a 330-square-mile stretch of gas-rich territory that both Israel and Lebanon claimed fell in their exclusive economic zones. A compromise to split the area 55% for Lebanon and 45% for Israel was proposed during the Obama administration, but never came to fruition.

In the current deal, approved by Israel’s government on Wednesday and Lebanon’s on Thursday, critics say Israel gave Lebanon 100% of its initial negotiating position. Lending credence to critics’ accusations was the sudden resignation of Israel’s lead negotiator, Ehud Adiri, a week before the Lebanon agreement was announced.

Opponents of the deal, among them opposition leader Benjamin Netanyahu, also complained that the agreement was a capitulation to Hezbollah, an Iranian proxy and the most powerful force in Lebanon. In July, the terrorist group launched three unarmed drones at an Israeli gas rig, and Hezbollah leader Hassan Nasrallah warned that “no one” would drill gas as long as Lebanon’s “rights” to extract gas were not upheld.

Amidror said his central question was how Nasrallah would react. “What will be the assessment of Nasrallah? … If, sitting with his people, he says, ‘Guys, we won. Israel collapsed under the pressure. … The Israelis retreated because they don’t want another war with Hezbollah, and let’s think what will be the next space in which we can blackmail them.’… it might lead to escalation,” Amidror said.

David Schenker, assistant secretary of state for Near Eastern affairs during the Trump administration, shared Amidror’s concern during the JINSA webinar. “The big question for me is whether this agreement makes Israel safer. And this is what we’re hearing from the Israeli government. This is what we heard from the IDF. I think it’s to be determined. It could go either way. And the problem of Hezbollah doesn’t go away because of this agreement. It could potentially exacerbate the problem,” he said.

Schenker also offered a positive note, saying the deal would essentially turn Hezbollah and its Lebanese Christian allies into Israel’s business partners. “The Israeli government got … [them] … to sign off on a document that essentially recognizes Israel. This has never been done. … This discredits Hezbollah at home [and] undermines a little bit the resistance narrative,” Schenker said.

Amidror said proponents of the agreement have argued that what matters is that Israel can start drilling immediately, something “more important than all the symbolic lines in the sea.” He agreed that with the threat from Hezbollah at least temporarily shelved, oil and gas companies will more readily agree to explore in the area.

The U.S. has agreed to mediate between French oil giant TotalEnergies and Israel. TotalEnergies will drill in Lebanese waters and as part of the deal, Israel is to receive a percentage of revenue from gas that extends over the Lebanese line into Israeli waters. The U.S. also said that it would guarantee Israel’s security and economic rights should Hezbollah challenge the agreement. The U.S. provided Israel with a letter to that effect, Israeli sources said.

“It’s a PR paper. Legally, no one is obliged to fulfill it,” Amidror said. Schenker agreed, saying, “This letter, if it exists, doesn’t have any legal weight.”

Both analysts expressed concern that some of the funds from an offshore gas windfall could end up in the hands of Hezbollah. “I think the Lebanese already fear that this money will disappear into the abyss of corruption,” Schenker said. “There’s no transparency. The state does not have a sovereign wealth fund. Already there are contracts … by Total and others to shell companies that are partially owned by some of the most corrupt political elites in Lebanon.”

“We can expect that not only will it help Hezbollah’s allies benefit, but that Hezbollah to some extent will benefit as well,” he said.