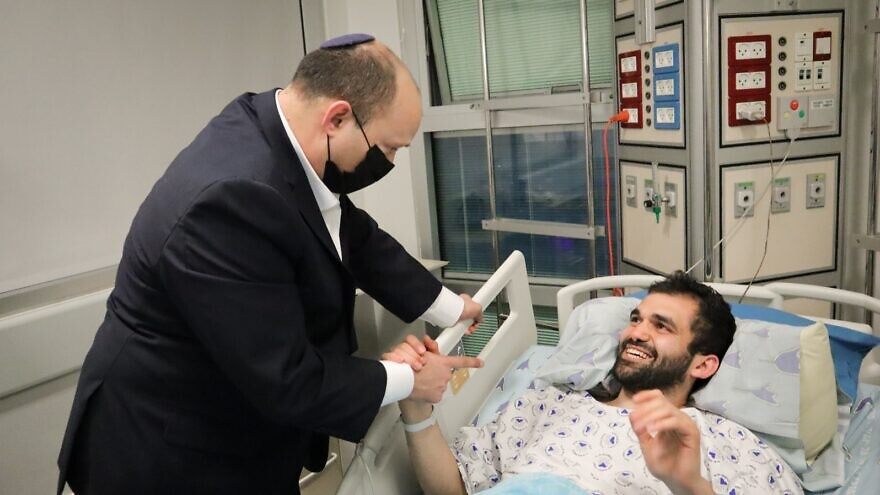 (April 10, 2022 / JNS) Israel is shifting “from defense to offense” in the fight against terrorism and is intensifying activities against “the sources of the terrorism at any time and any place,” Israeli Prime Minister Naftali Bennett said on Saturday.

Bennett made the remarks during a visit to the Israeli civilians wounded in Thursday’s deadly terrorist shooting in Tel Aviv.

Three people were killed and six wounded in the attack. The terrorist fled the scene and was killed by Israel Security Agency (Shin Bet) agents in a gun battle on Friday morning after being discovered hiding near a mosque in Jaffa.

Bennett vowed that Israeli security forces would operate “at night, during the day, morning and evening, everywhere. As I have said, there will be no restrictions on the security forces—on the Israel Defense Forces, ISA [Israel Security Agency—the Shin Bet] or the Israel Police. We will continue pursuing the terrorists everywhere.”

Bennett spoke with the wounded and their families, as well as heard the circumstances of their injuries. He was accompanied by the CEO of the Sourasky Medical Center, Professor Ronni Gamzu.

Speaking from IDF Headquarters in Tel Aviv on Friday, Bennett said: “Let every murderer know that we will find him. Those who aid and abet terrorists need to know that the price they will pay is too high to bear. I saw the father of the terrorist inciting more violence and being proud of his son the murderer. We saw the celebrations and the handing out of sweets in Jenin and Gaza. These are the people we are dealing with. No, this is not just a few individuals. Their desire is to break our spirit and our hold here in our land. But they will not succeed; we will never be broken.”

“The incident in Tel Aviv has ended but we are not lowering our level of alert either in Tel Aviv or in the rest of the country,” he added.