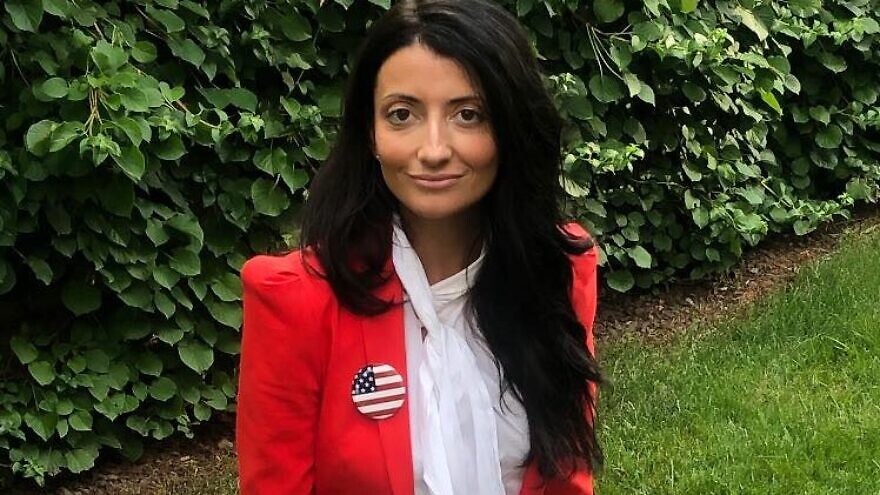 But when you are a Republican running for office in Democrat-filled New York City, you are a female running for a position that is dominated by men and you are in your first campaign expected to end in a razor close-finish but wind up winning by more than 25 percent of the vote, it’s more than simply a win.

Divorce and immigration attorney Inna Vernikov, 37, defeated special-education teacher Steve Saperstein to secure the City Council seat in the 48th District, which covers areas of South Brooklyn, by garnering 12,082 votes to 6,821 or about 64 percent to 36 percent. The seat was vacated by former councilman Chaim Deutsch after his conviction for tax fraud. Vernikov said she was not surprised to win by a large margin but surprised at how large it was.

“I actually didn’t think it was going to be a close race,” Vernikov told JNS by phone. “I’ve been on the ground for over a year. The feeling on the ground whether it would be Manhattan Beach, Sheepshead Bay or Midwood was the same. People were angry with what the Democrats are doing to this country. People were ready for a change. They believed I was that change.”

She said she did not expect to win by more than 5,200 votes, or about 28 percentage points, which was “shocking and exciting” as political pundits predicted that she had a shot to win but the race was too close to call.

The contest had a bit of added intrigue as Saperstein ran for office twice as a Republican and lost (once for City Council and once for State Assembly) and switched to be on the Democrat line, while Vernikov, who’d been a registered Democrat and never ran for office, switched to the Republican line. In the primary, Saperstein defeated five foes—Amber Adler, Binyomin Bendet, Mariya Markh, Boris Noble and Heshy Tischler—to setup a showdown with Vernikov. But there would be no showdown without both candidates showing up. Vernikov said she was surprised that Saperstein refused numerous offers to debate and also declined interview opportunities.

“I just think he was doing a disservice to his people and himself,” said Vernikov. “It wasn’t just him not debating. He refused to do interviews; for example, there was a NY1 story on the race, and he refused to do an interview with them and that gave me an advantage to only have my side shown in that publication.”

“You never give your opponent free space,” Sheinkopf told JNS. “You never let them debate without you there. We know now that Republicans can be competitive in Brooklyn and in portions of Queens. If crime continues to be the issue, Republicans or more conservative Democrats will have a higher probability of winning in the City Council race in 2023.”

Sheinkopf said it was arrogant to presume that a Democrat would win under all circumstances and had he been advising Saperstein, he would have told him to debate Vernikov. Saperstein amassed a plethora of impressive endorsements, including from the Flatbush Jewish Community Coalition, the United Federation of Teachers and perhaps the biggest prize—the Patrolmen’s Benevolent Association, which represents 24,000 New York City police officers. But it wasn’t enough.

Saperstein told The Brooklyn Paper as results came in on election night that “people don’t like the way things are going, and it was a protest vote for sure.”

Sheinkopf said union endorsements are an internal matter, and it’s difficult to know the exact reasons why they endorse a particular candidate. He also said Vernikov deserves credit.

‘People recognize authenticity when they see it’

Vernikov said she was appreciative that Donald Trump Jr. did a robocall in which he told voters “it is critical that we elect Inna Vernikov to the New York City Council because Inna stands for fully funding the police, jobs and a strong economy and putting our country first.”

Vernikov also said that she appreciated advice from Dov Hikind, a Democrat for whom she served as an aide when he was a State Assemblyman for Brooklyn in the 48th District and also works as the women’s chair of Americans Against Anti-Semitism, which was founded by Hikind.

Three other Republicans to join Vernikov in the winner’s circle were Joann Ariola (District 42-Queens), David Carr (District 50-Staten Island) and Vickie Paladino (District 19-Queens). And while it appeared that Brian Fox would defeat Justin Brannan (District 11-parts of Staten Island and Brooklyn) when absentee ballots were counted, Brannan won by a margin of 1 percent.

District 48 includes areas such as Brighton Beach, Midwood and others that have large populations of Jews and Russian speakers. While a majority are registered Democrats, the district showed support for former President Donald Trump in the elections.

Hikind said he wanted to see when the last time a Republican won the city council seat Vernikov won was and said he believed that in the last 100 years, a Republican had not been the victor. She is the first Republican to represent Brooklyn in the City Council since Marty Golden (District 43) in 2002.

“They were so certain they were going to win,” Hikind told JNS. “You had the entire Jewish establishment on their side. You had the Sephardic groups, the Flatbush groups, the blogs—some of which were incredibly nasty. They thought they had it locked up, and ‘Let’s not rock the boat, let’s not get into a debate, maybe something will be said.’ So they went on that road. They looked at Inna and said, ‘Come on, she can’t win, give me a break?’ She’s a proud Jew and will be a great example for everybody else. Just watch what she does.”

Saperstein did speak to the New York Post telling the paper that he had no involvement in the hacking of Vernikov’s social media.

Jon Loew, a founder of Legion as well as Fuel for Truth, an organization that helps to combat falsehoods and propaganda about Israel by educating on college campuses, said Vernikov impressed him.

“People recognize authenticity when they see it,” said Loew. “And in today’s political climate, authentic leadership is needed more than ever. Inna knows what needs to be fixed in New York City, and she knows how to fix it. The fact that she won by such a large margin confirms that many people agreed.”

Vernikov, who came to America from the Ukraine at the age of 12, said she is anti-vaccine mandate but not anti-vaccine, and said Democrats she spoke to voted for her partly due to her opposition to the vaccine mandate.

Vernikov said it is extremely important for her to fight against anti-Semitism, saying it’s not limited to making sure Jews don’t get beat up on the streets on New York City.

“Aside from the violence, Jews have to have their civil rights protected on school campuses and college campuses,” she said.

She also cited a new issue that also was reported by the New York Post where MS 51 teacher Jeffrey Levy claimed that Principal Neal Singh ordered him to stop wearing his “Proud Zionist” T-shirt in the building, but the teacher claimed staff members who wore shirts promoting Black Lives Matter or women’s rights were not told anything. The Republican winner said policies for teachers needed to be clear and equally enforced.

She said she is excited to be sworn in towards the end of the month, and is looking forward to building more bridges and relationships in the community.

She said while she was a political novice prior to her campaign, she is used to rolling up her sleeves and won’t be intimidated by anyone or anything. She said that she has learned from Hikind about the moral obligation to fight for justice and that a leader must step up to the plate, rather than waiting in the on-deck circle.