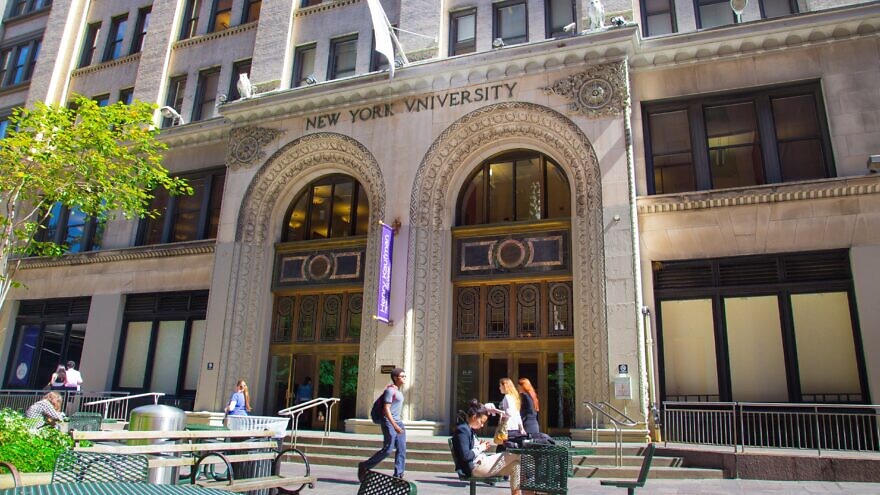 (June 1, 2022 / JNS) The Louis D. Brandeis Center for Human Rights Under Law urged the U.S. Department of Education to continue its oversight of New York University by the Office of Civil Rights (OCR) in light of new anti-Semitic incidents at the school.

The request came in a letter sent Tuesday to DOE assistant secretary for Civil Rights Catherine Lhamon. NYU has been under federal oversight for the last two years as part of an agreement stemming from a complaint by a Jewish student of a “hostile” environment rife with anti-Semitism.

That oversight ended on Monday. Yet the Brandeis Center said the university has not addressed its “anti-Semitism problem or fully complied with the agreement.”

“In the current circumstance, it would be derelict to permit NYU to run out the clock on OCR oversight and, thereby, undermine OCR’s critical work,” wrote the organization in a news release.

It noted an incident a few weeks ago in which Students for Justice in Palestine (SJP) sent out school-wide emails invoking the anti-Semitic trope that the “Zionists’ grip on the media is omnipresent” and advocated for terrorist violence against innocent Israeli civilians. The email was endorsed by nearly a dozen student groups. In response, numerous complaints were filed against the university.

It was a student complaint in 2019, filed by then-NYU student Adela Cojab, that originally led to the oversight by the DOE’s Office of Civil Rights. Cojab said the extreme anti-Semitism on NYU’s campus had created an “intolerable and unlawful hostile environment for Jewish students.”

The complaint reported a number of anti-Semitic incidents perpetrated by SJP members. In one incident, a student tweeted that he wanted all Zionists to die; in another incident, pro-Israel students were physically attacked in Washington Square Park that grounds the campus.

After amending its anti-discrimination policy, NYU and OCR agreed to a two-year oversight, which resolved the complaint “without further investigation.” The university also committed to specific measures to ensure that anti-Semitism did not persist on campus and to report its progress to OCR.

But according to the Brandeis Center, NYU’s anti-discrimination policy fails to address the behaviors that cause a climate of Jew-hatred, such as the demonization of Israel; accusations of dual loyalty of Jewish students; attempts to hold Jews responsible for perceived offenses; and violent anti-Semitic conspiracy theories.

Rather, the university focuses on students targeted for their physical appearance, religious dress or country of origin.

“To discontinue monitoring in this context would send precisely the wrong message: It would tell Jewish students and their harassers that even on campuses under OCR supervision, the government’s civil-rights watchdogs will not require universities to keep their word and protect Jewish students facing continued harassment,” concludes the Brandeis Center. “These students are on their own. This is an unacceptable response to discrimination and harassment.”