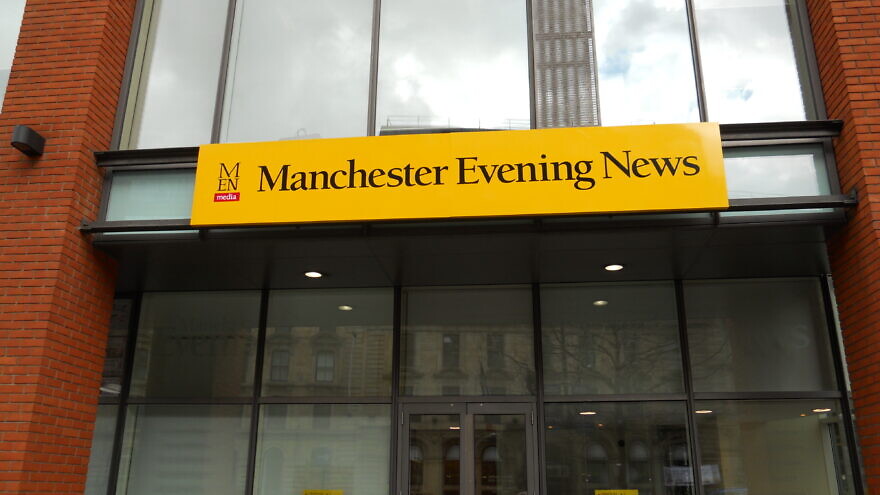 (November 24, 2021 / JNS) Manchester Evening News (MEN) and Metro have both apologized for publishing material that sparked outrage in the Jewish community.

The Jewish Representative Council of Greater Manchester and Region said it was “appalled” by the headline, and immediately wrote to MEN editor Darren Thwaites and requested an “urgent meeting.” The Jewish group added that “the framing of the headline and the subsequent article recklessly fails to reflect the tragic incident.”

Marie van der Zyl, president of the Board of Deputies of British Jews, described the headline as “a highly misleading inversion of what took place.”

On Tuesday, MEN said in a statement on Twitter, “We recognize the headline did not reflect the story in an accurate and balanced way. We apologize unreservedly for any upset caused.”

Meanwhile on Tuesday, Metro editor Ted Young apologized for publishing a letter by a reader that claimed former U.K. cricketer Azeem Rafiq could not be racist by posting anti-Semitic messages on Twitter because he is from a minority, while Jews are from a “privileged majority.” Jewish comedian and “Jews Don’t Count” author David Baddiel was baffled by the accusation and said on Twitter, “It is amazing how unchallenged this goes.”

“The idea that Jews are privileged and not a proper minority is at the heart of the Jews Don’t Count issue, and swirls at the basis of all the dismissals of the calling-out of anti-Semitism,” he explained.

Young replied to Baddiel’s tweet by saying, “We get a hell of a lot of points of view from around the country every day and this should never have got through.” He wrote in a separate post, “Our readers always challenge views that are clearly wrong in the cut and thrust of debate. But in hindsight, this should not have made the page. Apologies.”

An apology will also be printed in Metro’s issue on Wednesday, Young confirmed.