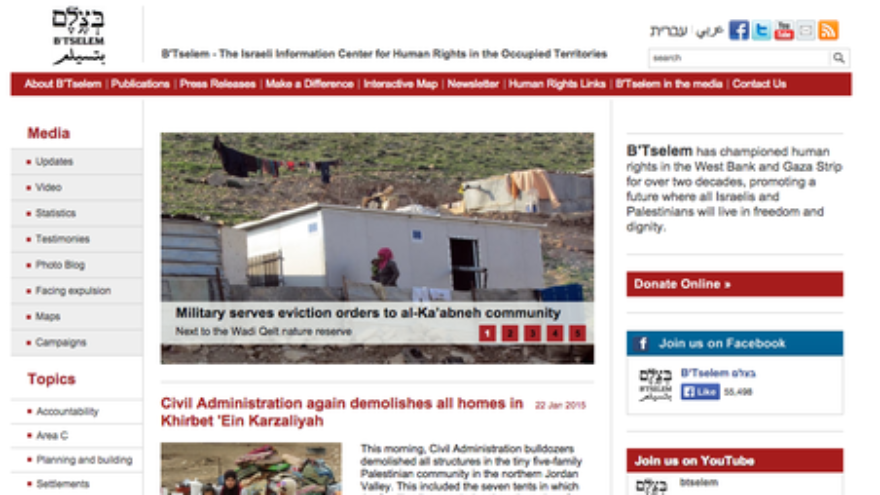 Hagai El-Ad, executive director of the non-governmental organization B’Tselem, has repeatedly lashed out at the Israeli government and the senior command of the Israel Defense Forces, accusing them of deliberately committing large-scale war crimes in the Gaza Strip during last summer’s war against Hamas and other Palestinian terrorist organizations.

In an op-ed article on the Israel radical leftist website Mekomit, El-Ad argues that the “atrocities” in Gaza came “a result of conscious decisions made by the Israeli government how to use military force in the Gaza Strip, even though the consequences of this policy are known in advance… the senior civilian leadership sent its army to Gaza, armed with a policy which its pre-predicted consequences were massive killing of civilians.”

He further accuses the Israeli government of an attempt to “whitewash the atrocities with minimal damage to its architects, while cowardly hiding behind the back of the soldiers… this is a cynical theatre in the political, legal, and international levels.”

El-Ad himself gave the answer. In a previous article on the same website, he harshly criticized the Jerusalem Magistrate’s Court over a case in which a Jewish “settler” was acquitted of charges related to bursting through a military checkpoint. Judge Dov Pollok ruled that the law “must be equally applied to the population regardless any consideration of nationality, religion, race or any other distinguishing factor,” but “the word ‘Palestinian’ is not mentioned even once in this verdict,” El-Ad lamented.

“The principle, on which the judge’s verdict is based, is inspiring: equality before the law,” wrote El-Ad. “Indeed, the law according to which all are equal, except those who are so transparent that judicial decisions can be made based on the principle of equality (!) without even mentioning [Palestinians] even implicitly. This is a factual acrobatics in its extreme absurdity: Talking about the ‘population’ in the [West] Bank while referring exclusively to the Israelis and totally ignoring the Palestinians. If the Palestinians are not part of the ‘population,’ who are they?”

El-Ad continued, “The reality in the [West] Bank with regard to the life of the Palestinians in comparison to the life of the Israelis is the opposite of equality: separate sets of law, different considerations regarding law enforcement, separate systems for planning and allocating resources, and a reality in which the military, legal, and economic forces are intended to promote the interests of one group over the interests of the other. … The day of this dispossession regime will come. Pollok’s verdict may be mentioned in a footnote in the history books dealing with the share of the Israeli courts in the preservation and promotion of this unjust reality. Until then, those who are left on the sidelines, ‘thanks to the principles of justice and equality of the Israeli law,’ are the Palestinians. They are not population, not human beings, but air.”

El-Ad’s sensational accusations are baseless. The judge ruled in a case of alleged discrimination within Israeli society that has nothing to do with Israel’s policy towards the Palestinian people.  Actually, it turns out that the IDF has executed a long-standing policy of deliberate discrimination against Israeli Jews by preventing them from driving on Palestinian roads in Area A of the West Bank. At the same time, Israeli Arabs and other non-Jewish Israeli citizens are allowed to cross the IDF checkpoints into the Palestinian territories. In practice, this policy turned all roads in Area A into exclusively Palestinian/non-Jewish roads.

In contrast to El-Ad’s implications, the word “population” in the verdict referred only to the question of discrimination against citizens of the state of Israel. The judge had no authority to rule on issues other than that one—making El-Ad’s criticism, accusations, and mockery of the Israeli court absent of any factual foundation.

El-Ad also used this case to further smear the IDF and depict it as a trigger-happy army in its treatment of the Palestinians. His argument relied on “incriminating evidence” that he found in the Jerusalem Magistrate’s Court verdict. According to El-Ad, Israeli soldiers didn’t shoot at the Israeli “settler” while he was bursting through the checkpoint only because he was Jewish, while Palestinians who act in the same manner can expect to be shot dead. Putting aside the numerous Palestinian terrorist attacks aimed at IDF checkpoints and the constant intelligence warnings in that regard, El-Ad’s accusation is baseless because the judge acquitted the Israeli “settler” of the charge of reckless driving and ruled that he did not burst through the checkpoint, but rather drove slowly for a short distance until making a full stop.

It seems that El-Ad did not read the verdict thoroughly, or decided to use it manipulatively in order to speak ill of Israel and to implicitly accuse the IDF of the systematic indiscriminate killing of Palestinians. This new case of B’Tselem’s distortion of the facts illustrates once more how the radical leftist political agenda took over that organization, and it should serve as a reminder to take B’Tselem reports with a grain of salt, including the reports that deal with the latest conflict in Gaza.

Jonathan D. Halevi is a senior researcher of the Middle East and radical Islam at the Jerusalem Center for Public Affairs, and co-founder of the Orient Research Group Ltd.