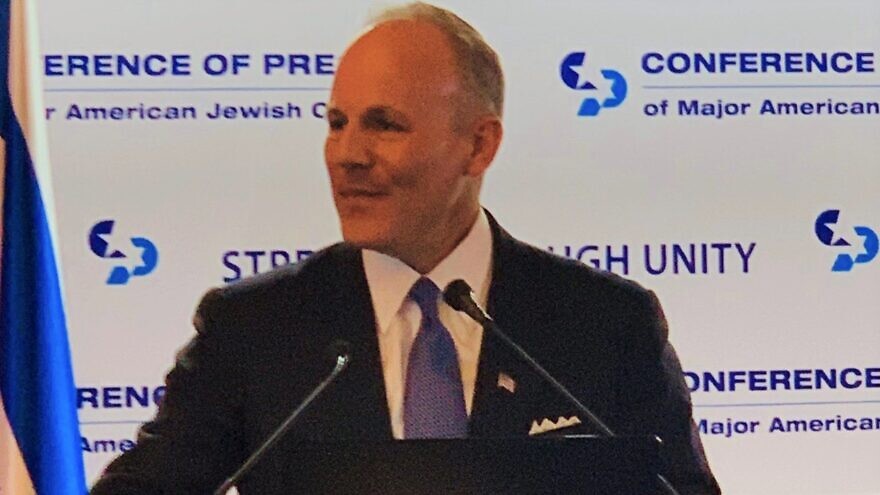 (February 21, 2020 / JNS) U.S. Special Envoy to Monitor and Combat Anti-Semitism Elan Carr said on Thursday that suspects, even those not charged with a crime, should undergo tolerance training to push against any bigoted beliefs they might hold.

“We should never ever let a defendant or even a suspect who isn’t charged with a crime—we should never let that suspect or defendant go unless they are forced to undergo a tolerance program,” he told the Conference of Presidents of Major American Jewish Organizations summit in Jerusalem.

“When you catch a suspect that is being radicalized, we as the law-enforcement community have a priceless opportunity to intervene in that young man’s life,” he continued. “Why would we pass that up? It doesn’t have to be a felon.”

Carr mentioned that he called for this course of action when he was a prosecutor.

“Every single probationary grant should require a young man who has committed a crime related to hate or who shows signs of hate, even if the crime has nothing to do with hate, to undergo a tolerance program,” he said.

He provided an example. “If a skinhead shoplifts a beer, it’s not a hate crime,” he said. “Why would you let that kid go?”

Carr called for fighting anti-Semitism in all its forms, both domestically and abroad.

Additionally, Carr said that despite anti-Semitic attacks in the United States, America is still very friendly toward Jews.

Finally, he commended the Trump administration’s executive order in December to combat anti-Semitism on college and university campuses.