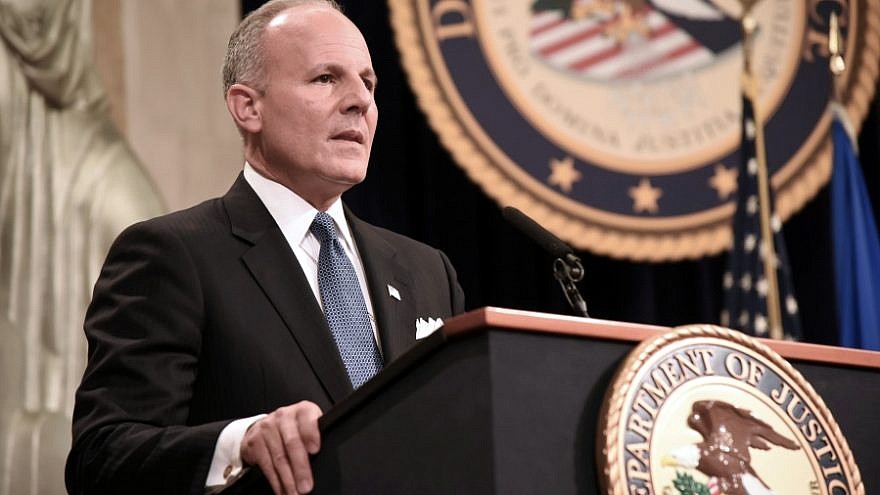 Previously, he was a deputy district attorney in the Los Angeles County District Attorney’s office. He was also a judge advocate in the American military’s judicial system, prosecuting enemy combatants before Iraqi judges at the Central Criminal Court. He also served as the international president of Alpha Epsilon Pi (AEPi).

Carr, 51, a Republican, unsuccessfully ran for Congress in 2014 against Democratic Rep. Ted Lieu of California.

He and his wife, Dahlia, have three children.

JNS talked with Carr by phone on Oct. 15. The interview has been edited for brevity and clarity.

Q: Does the federal government have an obligation to go after Big Tech for aiding and abetting anti-Semitism and anti-Zionism?

A: Obviously, a portion of online anti-Semitism rises to the level of crime, and, of course, that should be addressed and addressed aggressively. But the vast majority of online hate is protected by the First Amendment, so the government can’t go after protected speech nor should it.

Q: Would a free-market approach be best to combat anti-Semitism and anti-Zionism on social-media sites?

A: Competition is always a good thing, and certainly, the government has expressed that view specifically in the context of the social-media platforms. At the end of the day, you’ve got some bad actors who are spouting hate on the Internet. One can decide to regulate this or that platform, but at the end of the day, we’ve got to go to the source of the problem. The source of the problem is people hold despicable views. The First Amendment protects despicable views, but it doesn’t mean we can’t condemn them or call them out. I think that is absolutely critical.

One of the things I think is fundamentally important is that the social-media platforms adopt the IHRA definition of anti-Semitism. They haven’t done that yet. We’ve encouraged it publicly and privately. We will continue to push them to do that publicly or privately because I think it’s incredibly important.

You can’t confront a threat unless you define the threat. We have a widely accepted vehicle that defines that threat. The State Department uses the IHRA definition. U.S. President [Donald] Trump issued an executive order that employs the definition for the federal government at large. I think the social-media platforms ought to adopt it and use it as a tool. This is a tool not of censorship, but a tool of education. We want to deal with the haters by meeting their speech with, first of all, condemnation, and second of all, education.

A: I don’t want to name names. Obviously, there’s a deep web. We focus a lot on social media and rightfully so. On Twitter and Facebook alone, 1.7 million anti-Semitic posts were made in the first eight months of this year. I was shocked by the kind of things that are said openly and notoriously on these fringe deep-web platforms, so I absolutely think there’s a very, very big problem. This is just raw hate that is being spewed, and it’s dangerous. There are real effects to this. 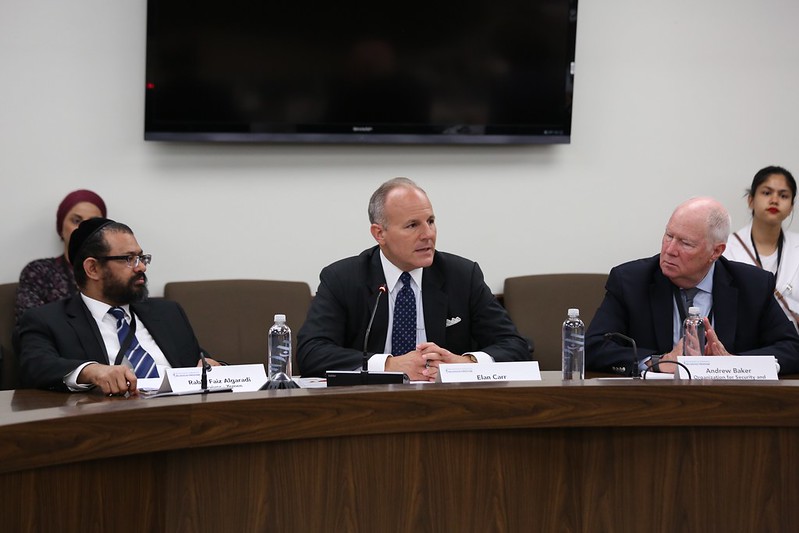 Special Envoy to Monitor and Combat Anti-Semitism Elan Carr speaks at a breakout session on Combatting the Rise of Anti-Semitism at the Ministerial to Advance Religious Freedom at the U.S. Department of State in Washington D.C. on July 17, 2019. Credit: State Department photo

Q: What do the Abraham Accords mean for the fight against anti-Semitism? Could it help diminish anti-Semitism in the Arab world?

A: The Abraham Accords are a game-changer for the Middle East and mark a sea change not only in Arab-Israel relations, but yes, in terms of the global fight against anti-Semitism. A lot of anti-Semitism in the world today is expressed in terms of Israel hatred—the delegitimization and demonization of the Jewish state, and the denial of participation in economic intercourse and ordinary relations with other countries. For the UAE and Bahrain to not only normalize relations with Israel, but to do it in the manner in which they’ve done it—a full embrace, and enthusiastic and affectionate embrace of the Jewish state—is historic, profoundly important and world-changing. I think while this doesn’t spell the end of the BDS movement or the end of anti-Semitism, it is an enormous loss for the anti-Semites of the world who want to continue to exclude Jews and demonize them.

You’re going to see more Arab states normalizing relations with Israel. This is an incredible time we’re living in.

Q: For countries like Saudi Arabia that sponsor anti-Semitic content directed at American universities, should eliminating that problem be a contingency for normalization with Israel?

A: From the first days of my appointment to the role of special envoy and in fact my first public speech, I’ve talked about anti-Semitic curricula in the Arab world and how important of a policy priority this is for me. When children are indoctrinated in hate, first of all, it’s an appalling injustice. It amounts to child abuse. But also it does intergenerational damage that’s so difficult to undo, so this is something I have stressed, that I have worked on, and that I will continue to work on as long as I’m in this role. This is a critically important issue. Given the changes in the Middle East, I think Arab states are now more willing than ever before to give a fresh look at their curricula, and how Jews and Israel are treated, and how Jewish history in the Arab world is treated, which is an issue of deep, personal significance to me.

Q: What was your reaction to the Council on Foreign Relations recently hosting a Zoom event with Iranian Foreign Minister Javad Zarif?

A: Javad Zarif is the chief propagandist for the world’s leading state sponsor of both terrorism and anti-Semitism. Any place that welcomes representatives of a country that brutalizes their own people and have committed mass murder through their proxies in Syria, that funds and influences and at times even controls one of the most dangerous terrorist organizations on earth, Hezbollah, that regularly threatens to commit genocide on the Jewish people, that calls Israel “a cancerous tumor.” That recently called the president’s Jewish son-in-law a “filthy Zionist agent”—the list of offenses of this regime is long. It is beyond imagination why any reputable entity would want to give them a platform.

Q: What was your reaction to the settlement earlier this month between New York University and the U.S. Department of Education?

A: The Title VI case. I don’t want to comment on internal matters to the Department of Education, but the allegations that I heard coming out of New York University were very, very troubling. NYU isn’t the only place. We saw several Jewish students run out of elected office at the University of Southern California. We’ve seen harassment all across the country and everywhere in between. It’s been very rough for Jewish students on far too many campuses.

Q: Despite Trump recognizing Jerusalem as Israel’s capital and moving the U.S. embassy to there, U.S. citizens born in Jerusalem still cannot list “Jerusalem, Israel” as their place of birth on their U.S. passports. Is the administration considering making a move to allow U.S. citizens to do so otherwise?

A: I am aware of that issue, and I know that issue has been actively discussed and looked into it by the appropriate people and I will say at a very senior level.

Q: Is it still under active consideration?

A: It’s been my greatest joy. I loved being a criminal prosecutor. I loved and still am a U.S. Army officer. As a criminal prosecutor, I fought to keep our communities safe. As an officer, I fought to keep my country safe. And now in this role, on behalf of the United States of America, fighting to keep Jewish people safe across the world. It’s an incredible privilege. And it’s also a privilege to serve my country in a substantial capacity. It’s a privilege to serve in this administration. It’s been an absolute joy to do this. Is it a challenge? Of course. But what isn’t a challenge. Any substantial office in the U.S. government is very challenging. Fighting what’s often called the world’s oldest hatred is certainly challenging.

But I’m optimistic. There is a lot of good news out there. Yes, we have every right to highlight the bad news because that’s a good thing to do. You want to know what’s bad so that you know what to fix. But we should never ever forget that there is a lot of good news. The changes that are being made. The partners that we have, non-Jewish leaders at all levels of government from the most senior on down who are champions of this cause. Who are deeply offended by Jew hatred and fight it with every fiber of their being. It’s one of my greatest privileges in this job to be able to work with leaders around the world who are so committed to fighting for the Jewish people because it’s the right thing to do.