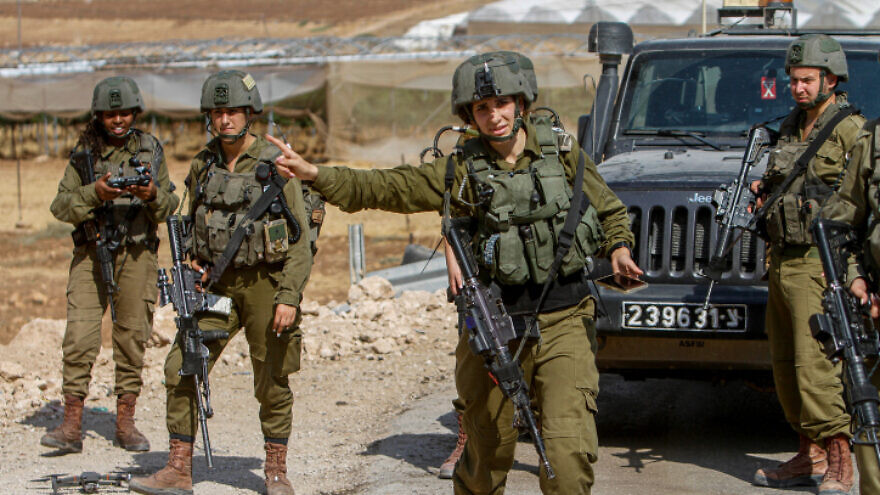 Israeli soldiers block the area near the scene of a shooting attack on a bus on Route 90 in the Jordan Valley, Sept. 4, 2022. Photo by Nasser Ishtayeh/Flash90.
Spread the word.
Help JNS grow!
Share now:

(September 5, 2022 / JNS) Four Israeli soldiers were lightly wounded on Sunday when a terrorist hurled an explosive device at an Israel Defense Forces position near the village of Nabi Saleh, near Ramallah, from a moving vehicle.

The Israel Defense Forces launched a search for the attackers.

Meanwhile on Sunday, violent clashes erupted during an Israeli counter-terror operation in Jenin and Qabatiya. According to the IDF, rioters threw explosive devices, firebombs and rocks at Israeli forces, who also reported hearing gunfire in the area. Soldiers responded with live fire, and a number of Palestinians were hit, the IDF confirmed.

The Palestinian Authority-run Wafa news agency quoted the P.A. Health Ministry as saying that a 19-year-old Palestinian was hit in that incident, and died in a hospital near Jenin soon afterwards.

Israeli forces also came under attack during a counter-terrorism operation in the Ein Beit el Ma camp near Nablus, and responded with riot dispersal means, the military said.

Security forces also seized illicit funds, weapons and ammunition during a raid in Hebron, and a total of 17 security suspects were arrested overnight Sunday, according to the IDF.

Israeli security forces were also engaged in security operations in the Jordan Valley area overnight Sunday, after seven people (six of them soldiers) were wounded, one severely, in a terrorist shooting on a passenger bus in the area earlier in the day.