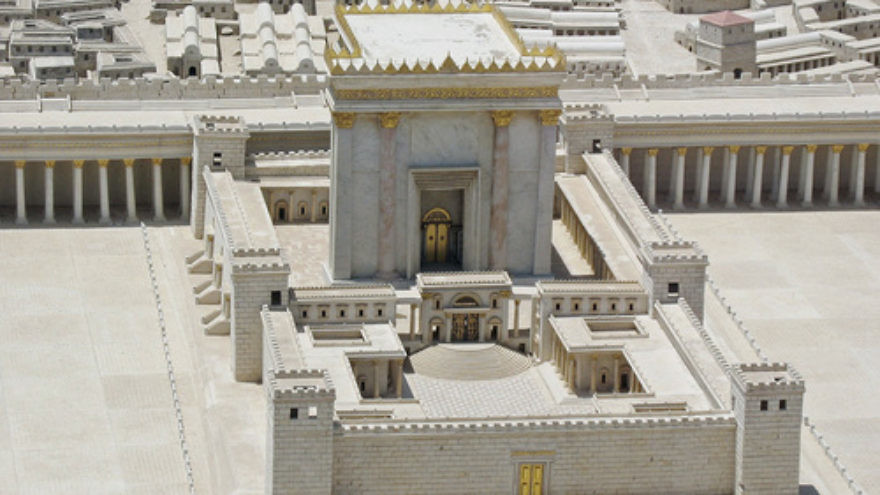 Between 19 BCE and 4 BCE, King Herod I renovated the Jewish Temple in Jerusalem, enlarging and beautifying it. It is during this same period that we first learn of the Jewish pilgrimages to Jerusalem on what are known as the shalosh regalim, “the three pilgrimage festivals.”

All of the festivals—Passover, Shavuot, and Sukkot—center around the story of the Exodus in some way. But Passover is the first and foremost of the bunch.

Jerusalem always held a special place in the hearts of the Jewish people, but as the Romans built roads and as Herod expanded the Temple, the pilgrimage to Jerusalem became commonplace and served as a message of unity—“one Temple, one God, on Passover”—for all of the Jews, said Prof. Jonathan Klawans of Boston University’s Department of Religion.

Yet detailed writings about what the pilgrimage festivals may have looked like during Temple times don’t exist. According to Talmudic scholar Dr. Joshua Kulp, author of “Schechter Haggadah: Art, History and Commentary,” most knowledge on the subject comes from the works of the ancient historian Josephus. While later writings (such as the New Testament) describe what it was like in Jerusalem during the Second Temple era, those works were written at a much later time and some scholars doubt their accuracy.

It isn’t known where people stayed or slept when they were in Jerusalem, or how many people were there (though most assume a large number), or what people felt at that time. What is known, Klawans told JNS.org, is that the pilgrimages were a social experience that pulled the Jewish people together.

It’s also clear that for Passover, pilgrimage participants ate in Jerusalem as family units. A representative from each family would take an animal, bring it up to the Temple, and have it slaughtered. Then, the representative would bring the animal back, and the family would cook and eat the sacrificial meat. During this festive meal, families also drank wine, but not a specific number of glasses. They sang songs—specifically, the Hallel prayer, which is also part of the modern Passover seder.

“There may have been discussion [at the Passover pilgrimage meals] about leaving Egypt, and we cannot prove that they didn’t talk about it, but none of the Second Temple descriptions say that they did,” Kulp told JNS.org.

According to scholars, the Passover seder as we know it today was developed between the destruction of the Temple (70 CE) and the end of rabbinic period (1,000 CE).

“The seder we have today is an organized meal with instructions,” said Kulp. “The seder tells us how many cups of wine and when to drink them. It tells us when to wash our hands, to say blessings. There is even a ritualized way of telling the Passover story.”

But exactly how much of the contemporary seder relates to the pilgrimage meals? Klawans said it isn’t so much that the formulaic seder aligns to the pilgrimage and sacrifice, but rather, that the perception of that connection is the key to understanding Passover.

“Is having a seder like going to the Temple? There are obvious differences. But the perception of continuity really drives people,” he said. “Jews today in Pennsylvania or Boston or Jerusalem are experiencing—are holding—seders at the same time and in basically the same way, and that is significant for us.”

Tova Hametz, who lives in the Old City of Jerusalem, echoed Klawans’s sentiment, but added that she believes a deep unity can be felt to this day in Jerusalem, which she called “the epicenter of the universe.”

“It is the holiest place,” she told JNS.org. “We are in Hashem’s backyard. Now that all the Jews are scattered in exile, we sometimes forget about belonging here [in Jerusalem], where you still can experience the inspiration and community consciousness of being together in celebration.”

Hametz lives on a narrow street, about 6 feet wide, which passersby need to navigate to reach the Kotel (Western Wall) from the Jaffa Gate. On Passover, thousands of people walk down her street.

“I open my door and I can sit on the front steps with my daughter and watch as they flood down the street,” she said. “And it is not for an hour or two, it is all hours of the day and night. They come in masses—some running, some walking. Every kind of person you can imagine. Every variety of dress. Every size and background and color.”

While Hametz said she can only try to imagine what it must have been like when the Temple existed in all its greatness, she focuses on living in the place where the next Temple could be built at any moment. And on Passover, as the throngs of rowdy people keep her up in awe, she tries to remain conscious of what it means to be a Jew.

Hametz said, “Seeing the experience of everyone coming here, to the Kotel, together—that is what it means to be in Israel, to be a Jew, to be a part of the whole.”

Maayan Jaffe is senior/writer editor at Netsmart and a freelance writer in Overland Park, Kan. Reach her at jaffemaayan@gmail.com or follow her on Twitter, @MaayanJaffe.