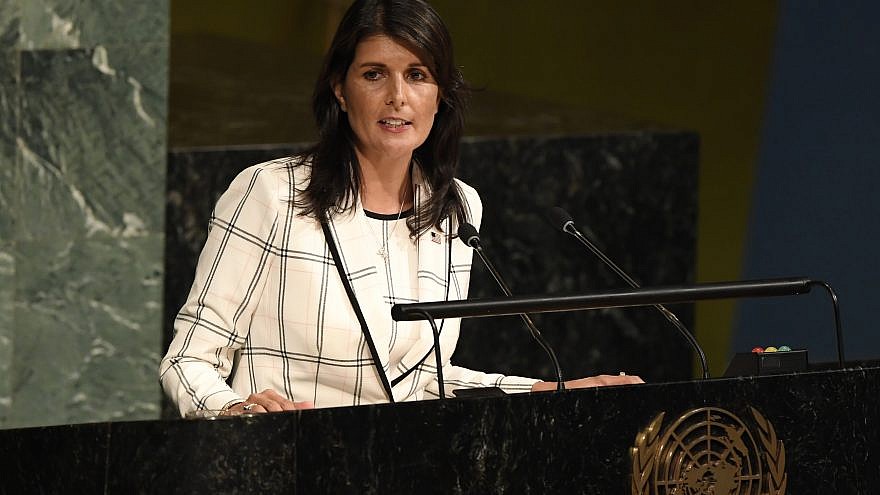 (November 26, 2020 / Jewish Journal) Former U.S. Ambassador to the United Nations Nikki Haley called on the Trump administration to declassify a report detailing the current number of Palestinian refugees who are receiving aid from the U.N. Works and Relief Agency for Palestinian Refugees (UNRWA).

“Very important that the Trump administration declassify the report that provides a current estimate of the number of Palestinian refugees who are receiving support. This goes to the heart of speaking hard truths in the name of moving peace forward,” she tweeted on Wednesday.

Her tweet linked to a Nov. 23 New York Post op-ed authored by Foundation for Defense of Democracies Senior Adviser Richard Goldberg and Senior Vice President for Research Jonathan Schanzer. The op-ed noted that Congress required the State Department in 2012 to produce a report on the number of Palestinian refugees receiving aid from UNRWA that were alive in 1948; the report was completed and sent to congressional appropriations committees years later, but remains classified today.

“The public release of these figures could spark an international debate over UNRWA’s mandate,” wrote Goldberg and Schanzer. “Secretary of State Mike Pompeo should also announce an official U.S. policy change that for purposes of future U.S. funding and planning, Palestinian refugees are narrowly defined as people who were personally displaced from then-Palestine between 1948 and 1949 and aren’t currently citizens or permanent residents of the Palestinian Authority or any country.”

They added that adopting this policy would show how UNRWA “has kept people in poverty” and “encouraged multiple generations of helpless people to remain erroneously identified as refugees.” Additionally, it would “upend the mythology of a Palestinian ‘right of return’—making it clear that Israel determines who becomes Israeli citizens, not a U.N. agency,” they argued.

The Trump administration zeroed out funding to the U.N. agency in 2018; according to Fox News, President-elect Joe Biden hasn’t specifically commented on UNRWA but his campaign website does state that he will “restore economic and humanitarian assistance to the Palestinian people, consistent with U.S. law, including assistance to refugees.”