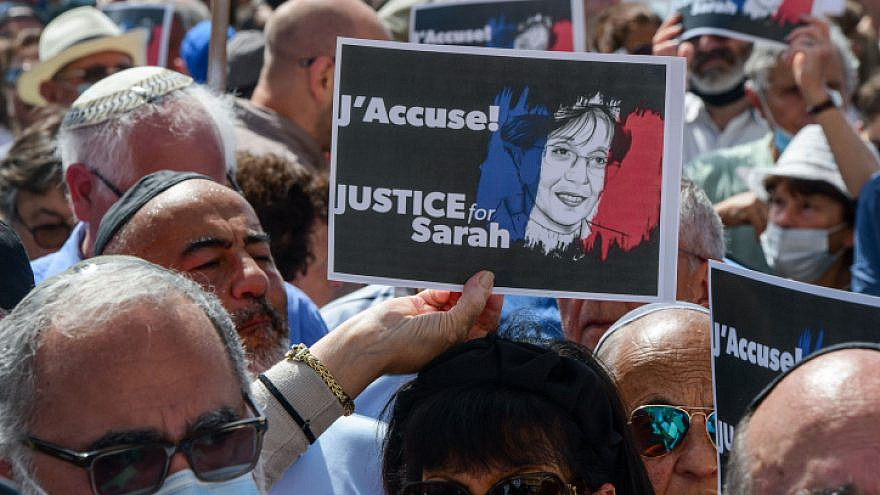 Protesters gather at the French embassy in Tel Aviv to demand justice for Sarah Halimi, who was murdered in 2017 by her Muslim neighbor in Paris, April 25, 2021. Photo by Avshalom Sassoni/Flash90.
Spread the word.
Help JNS grow!
Share now:

(April 26, 2021 / JNS) Hundreds of protesters rallied in front of the French embassy in Tel Aviv on Sunday in solidarity with the large-scale demonstration held in Paris to demand justice for Sarah Halimi, a 65-year-old French Jew who was murdered in her home in 2017 by a Muslim neighbor.

The demonstration, which was joined by a smaller protest in Jerusalem, as well as others around France, came after the French Court of Cassation’s Supreme Court of Appeals upheld a 2019 ruling by a lower tribunal that the perpetrator—27-year-old Kobili Traoré, who screamed Allahu Akbar (“God is great”) and recited Koranic verses before murdering Halimi—was not responsible for his actions.

According to both rulings, Traore, now 32 and who currently resides in a psychiatric facility, was in a delusional state at the time of the murder due to heavy cannabis consumption.

More than 20,000 took part in Sunday’s demonstration in Paris, while an additional 2,000 marched in Marseille and 600 protested outside of a synagogue in Strasbourg, i24News reported.