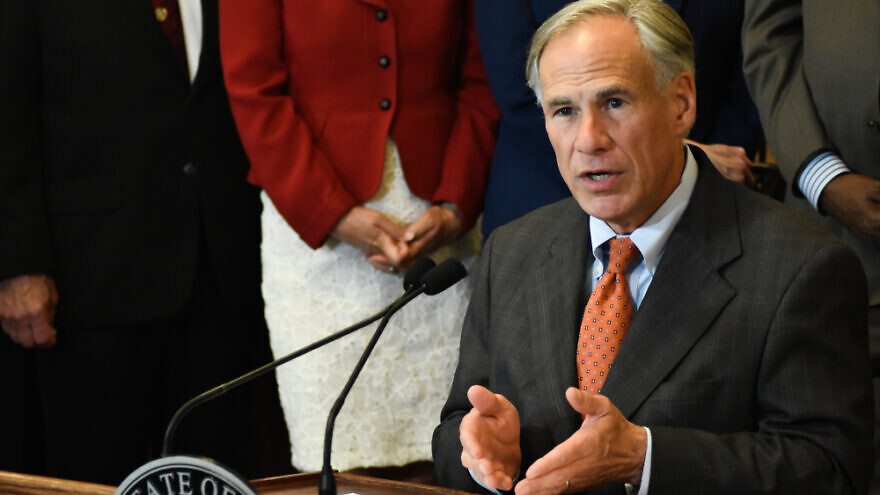 (January 25, 2023 / JNS) The Israeli-American Council’s (IAC) 8th National Summit in Austin, Texas, last week served as an opportunity to celebrate the relationship between Israel and the American heartland.

“It really is a privilege to get to welcome and participate in the Israeli American Council event that you are hosting here in Austin,” said Texas Governor Greg Abbott during the summit’s “Plenary in White” session on Jan. 20. “I’m proud to have the opportunity to get to visit with such steadfast advocates for the Jewish community in America as well as the Jewish community in Israel.”

Abbott went on to laud the “strong and enduring bond” between the peoples of Texas and Israel.

“We share the blessings of liberty but also the burdens of vigilance,” Abbott said. “Texans were forged in fire at the Battle of the Alamo. Just like Jewish people have been forged from some of the most epic struggles in the history of the entire world.”

The Texas governor went on to say that the history of Texans and Israelis share a common heritage of excellence, but also a burden of vigilance. Abbott relayed that the Texas and U.S. constitutions have their roots in the Ten Commandments.

As the Attorney General of Texas, Abbott successfully argued the case in front of the U.S. Supreme Court on behalf of then-Governor Rick Perry to keep the Ten Commandments monument on Texas capitol grounds.

The IAC summit took the opportunity to highlight many of the important business and hi-tech contributions Israeli Americans have made to the United States.

“Not every Israeli company is amazing, but all their returns are amazing!” said executive director Yasmin Lukatz of the Israel Collaboration Network (ICON), a non-profit that aims to create a Silicon Valley-based community to harness and support Israeli startup technology and innovation.

The IAC summit showcased the strong economic ties between Texas and Israel, with the Lone Star State exporting over $1 billion dollars worth of goods to Israel and importing $1.5 billion from the Jewish State in 2021.

“In Texas, we do not do business with entities that seek to destroy Israel. Period!” said Texas Governor Greg Abbott to over 3,000 IAC summit attendees. Abbott also noted with pride his signing of two anti-BDS bills and his unveiling of a cornerstone plaque with the Texas seal on it that is located in the U.S. embassy in Jerusalem.

Israel’s contributions to the overall U.S. economy extend beyond Texas, with Israeli American innovation serving an integral role in the overall hi-tech economy. Founder and president of the cloud-based live streaming tool StreamElements Doron Nir highlighted the positive reception he and other Israelis received when he moved to the San Francisco Bay Area.

“It is sort of like an Israeli mafia, but we can’t use that word anymore because it’s offensive,” said Nir, eliciting laughter from the audience. Nir explained the tight communal bonds between Israelis served as an advantage in the hi-tech sector innovation.

Co-founder of WeWork Adam Neumann talks about his Israeli roots

In a rare public appearance, Israeli American billionaire and co-founder of WeWork also spoke at the summit, about the importance of Israel in his life and career.

“What I do know is that you can take the Israeli out of Israel, but you can’t take the Israel out of the Israeli,” Neumann said as the crowd applauded. “I think it is very important to remember that and be very proud about it.”

Neumann related how he started his company with an original team of eight employees, five of whom were Israelis that served with him in the army. Coming to New York City, Neumann and his friends did not know much about the United States, but came with what he described as “Tel Aviv energy.”

Neumann spoke with pride about his upbringing in the southern Israeli city of Beersheva and serving as an officer in the Israeli Navy, restating that Israel remains central to his identity despite having lived in the United States for more than 20 years.

“Because Israel is very, very important to me, I never took an American citizenship. I was never interested. I always wanted my Israeli passport and my Israeli citizenship. So I feel extremely Israeli,” he said.

Neumann concluded by saying that it was because of his upbringing in Israel that he managed to find success in business and that being away from Israel for so long gave him a better appreciation of his homeland.

“Sometimes when we’re in Israel, we don’t appreciate how great it is,” said Neumann. “Another year passes and you feel like you miss it more. Sometimes to appreciate really great things, you have to be removed from them. So I actually think being away from Israel has made me crave Israel more. I get so excited when I get to Israel I get down and kiss the floor when I land.”