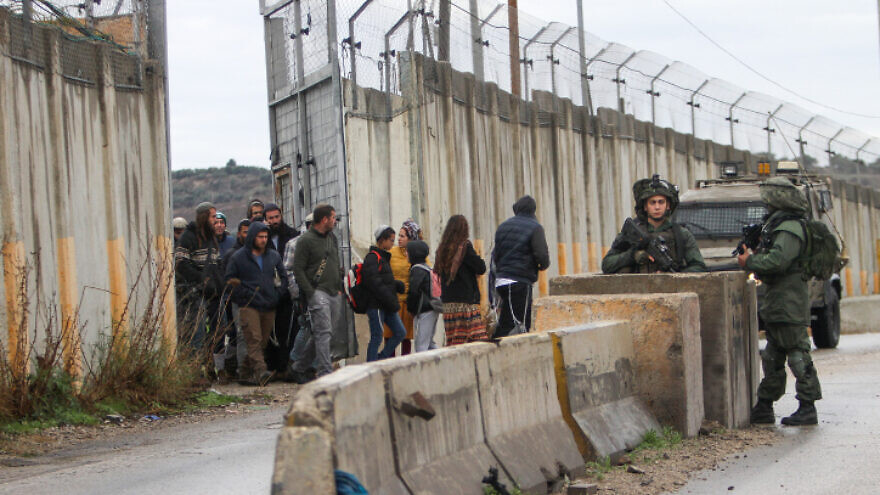 IDF soldiers guard the Homesh checkpoint while mourners enter for the funeral procession of Yehuda Dimentman, who was killed by a Palestinian terrorist, Dec. 17, 2021. Photo by Nasser Ishtayeh/Flash90.
Spread the word.
Help JNS grow!
Share now:

(December 26, 2022 / JNS) The Israel Defense Forces has begun decreasing the number of battalions it has deployed in Judea and Samaria.

The number of battalions in the area, currently at 23, will go down to 21 due to the construction of new sections of the seam line security barrier.

At the start of December, the IDF had 26 battalions in the area, many of them reinforcements sent to respond to a sharp increase in Palestinian terrorism and rioting, with a focus on Jenin and Nablus in Samaria, and other units sent to plug gaps in the seam line exploited by Palestinians to illegally enter Green Line Israel.

The IDF plans to further reduce the number of battalions to 19 deployed to the area in the first quarter of 2023 since some that were sent in to plug gaps in the seam line are no longer needed.  These gaps are now being filled by the new security barrier section being built by the Defense Ministry, which is complete with hi-tech sensors and alert systems.

Walla cited a senior defense source as stating that a year ago, hundreds of thousands of Palestinians crossed into Israel every week without interruption, some with work permits (doing so to avoid lines at checkpoints) and many without, while today, that number has dropped to hundreds.

The battalions will be able to return to their combat training programs.