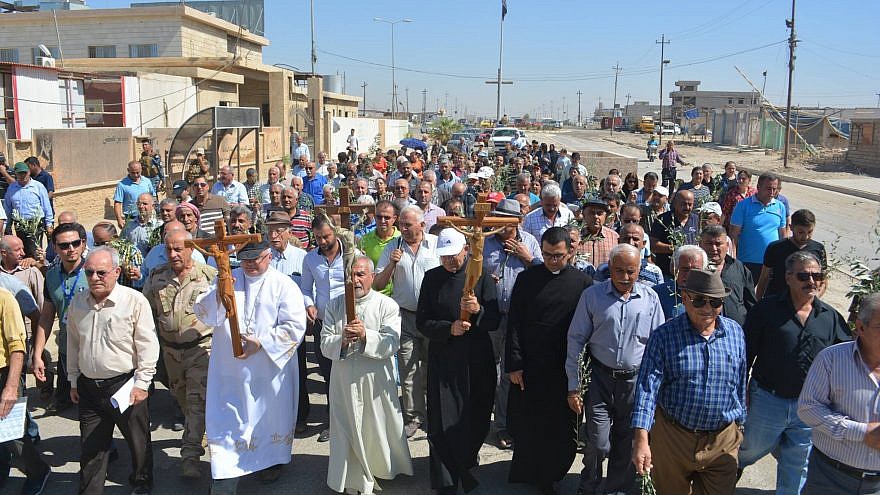 Iraqi Christians hold a procession in the Christian village of Qaraqosh in northern Iraq. Credit: Aid to the Church in Need.
Republish this article
1029 WORDS
Spread the word.
Help JNS grow!
Share now:

(March 1, 2022 / JNS) The West is missing a critical component of the story when it comes to the persecution of Middle East Christians, said Farhad Rezaei, a visiting lecturer at Toronto-based York University, during a Zoom presentation on Feb. 22. And that missing element is Iran.

In the presentation — sponsored by The Philos Project, a Christian group advocating for pluralism in the Near East — Rezaei explained that Iran plays a central role in the destruction of Christian communities, specifically in Iraq, Syria, Lebanon and Yemen.

The mainstream Western media narrative is that “only jihadists,” such as Al-Qaeda and ISIS, are behind the persecution of Christians in the region, said Rezaei, who is also a senior fellow at the Philos Project.

“The reality is much more complex than the simple image that jihadists came around and killed Christians,” he said.

According to Rezaei, what distinguishes Iran when it comes to persecution of Christians is that it is pursuing a “strategy of eliminationism” — an organized, unrelenting, Nazi-like campaign to reduce the Christian presence in the Middle East. “Eliminationism” means shrinking the Christian communities by making life for them unbearable, including through confiscation of private property, arbitrary detention, torture, public incitement, abduction and killing, explained Rezaei, who spent seven months researching this subject and will be releasing a report with his findings in the coming weeks.

Rezaei provided an overview of the dramatic decline in the Christian population in the aforementioned countries.

In Iraq, before 2003, the Christian population stood at 1.5 million. It is currently between 141,000-171,000, or 0.3% of the population. He noted that most of the Christians were pushed out by Shi’ite militias. He described the Christians in Iraq as “the undisputed losers of the sectarian conflict.”

In Syria, before 2011, the Christian population was 2.3 million. It’s now 677,000. Before Syrian President Bashar al-Assad was forced to rely on Iranian help during the Syrian Civil War, he left his Christian minorities alone. Rezaei said it was the Iranians acting as military advisors to the Syrian army who introduced the eliminationist strategy into Syria. “In some cases, the Iranians and the Lebanese Hezbollah wore the uniform of the Assad regime army [to hide their identity], but the local people understood that they were from Hezbollah and Iranians by their accent,” he told JNS.

Rezaei cites two main reasons why the Iranians are implementing their eliminationist plan. One is strategic. Iran wants to build a land bridge to the Mediterranean, and Christian communities sit squarely along that route.

The second is ideological — Khomeinism or “new Shi’ism” views Christians and Jews as “pollution,” Rezaei said. While he said it is true that Shi’ism contains anti-Christian and anti-Jewish elements, it was “quietist” and minorities were largely left alone if they paid a jizyah tax, a yearly per capita levy on non-Muslims. This changed with Khomeini’s rise. Khomeini and another important cleric, Ayatollah Mohammad-Taqi Mesbah-Yazdi, were strongly influenced by Egypt’s Sayyid Qutb, the leading member of the Muslim brotherhood and “father of Salafi Jihadism, or global terrorism,” Rezaei said.

Mesbah-Yazdi opened the Haghani seminary. “Most of the senior members of the IRGC (Islamic Revolutionary Guard Corps) are disciples of Ayatollah Mesbah-Yazidi. They are all graduates of the Haghani school,” he said.

Mesbah-Yazdi rejected the concept of universal human rights, considering it a product of the Judeo-Christian tradition. “He developed his own version of Islamic human rights and obligations. And according to this version of human rights, Muslims basically have the right to kill their religious enemies,” Rezaei said.

He said the Iranians learned from the Nazis. “Although they deny the Holocaust, they have learned a lot from the Holocaust. However, they understood that they cannot destroy Christians and Jews by the same methods that the Nazis implemented in Germany, like using gas chambers and genocide, so they came up with a different scheme. And that was the strategy of eliminationism.”

Raymond Ibrahim, a distinguished senior fellow at the Gatestone Institute and author of Sword and Scimitar: Fourteen Centuries of War between Islam and the West, agreed that “we shouldn’t focus too much on ISIS and the radical groups because they’re just the tip of the iceberg,” and that Iran is one of the worst actors. But he noted that when looking at the global picture, the lion’s share of Muslim persecution goes on in Sunni countries, if for no other reason than that there are more of them.

Citing the recently released report “2022 World Watch List,” by the pro-Christian NGO Open Doors, which ranks the top 50 worst countries for Christian persecution, Ibrahim noted that Iran ranks ninth. Most of those ranking higher are either Sunni countries or countries with large Sunni populations.

Rezaei told JNS the purpose of his report isn’t to deny the persecution committed in Sunni countries. “What I’m trying to say is that the Iranians persecute Christian minorities in an organized way, just like the Nazi Germans persecuted Jews,” he said, noting that in Sunni countries like Pakistan, for example, the persecution may be intense, but it’s not a top-down, nationally organized effort.

Both Ibrahim and Rezaei agree that the larger, mainstream human rights groups fail to address the problem. Ibrahim suggested that one possible reason for this failure is that they’re eager to prove that they’re not “tribalistic,” leading them to shy away from helping fellow Christians.

“Also, I think a lot of it is their internal animosity for their own heritage, upon which has been heaped all sorts of sins, both real and imagined. There’s an animosity for Christianity amongst descendants of Christians,” Ibrahim said.

Rezaei said there’s still hope for the Christian communities plagued by Iran and its proxies, but a united effort by Western nations is essential. He expects that little headway can be made in the current climate, in which the Biden administration seeks to appease Iran, but “that said, it doesn’t mean we should stay silent.”