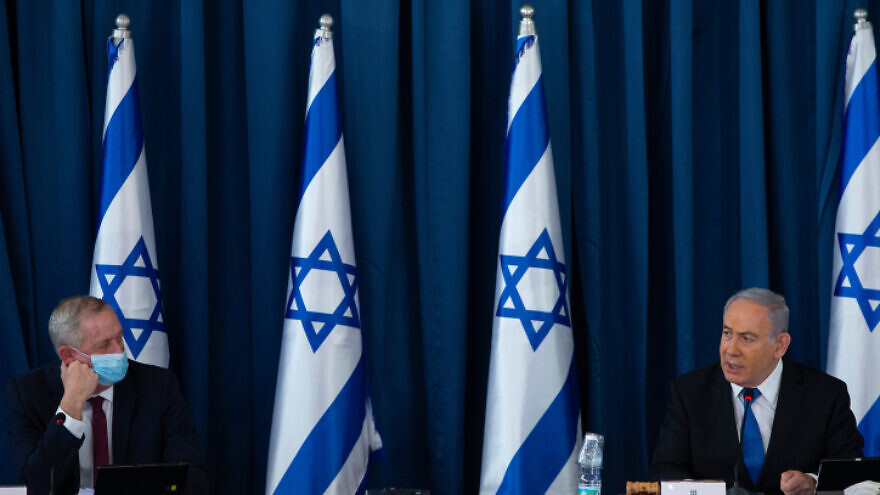 (August 9, 2020 / JNS) In the most blatant sign so far of confrontation within the current Israeli government, differences between the two major coalition partners have caused the cancellation of Sunday’s weekly Cabinet meeting.

According to the Likud, the meeting was canceled due to a disagreement with Blue and White on a multibillion-dollar economic aid program.

“The cabinet will not convene … due to Blue and White’s refusal to include on the agenda a governmental NIS 8.5 billion [$2.5 billion] economic aid program of the prime minister [Benjamin Netanyahu] and finance minister [Israel Katz, also of the Likud] to grapple with the coronavirus crisis,” said a Likud statement released on Saturday.

However, the larger issue appears to be the overall state budget bill; Blue and White is accusing the Likud of violating a coalition agreement stipulating that the budget would include 2021 as well as 2020. Citing the coronavirus crisis, which erupted after the coalition government was inaugurated on May 17, Netanyahu has been pushing for a one-year budget, which would effectively cover only the last quarter of the year.

If the state budget is not passed by Aug. 25, the government will automatically dissolve.

Under normal circumstances, the budget is passed by March 31. However, due to the prolonged political stalemate which resulted in three Israeli parliamentary elections within a one-year span, a 2020 budget was never passed, severely hampering state funding to critical national and local projects.

Under the terms of the agreement reached between the Likud and Blue and White, the parties’ respective leaders—Netanyahu and Defense Minister Benny Gantz—are to alternate as prime minister.

Blue and White is concerned that Netanyahu is insisting on a one-year budget as a pretext to bring down the government in early 2021 to avoid having to relinquish the premiership to Gantz.

“The cabinet meeting will not take place … in light of the Likud’s insistence on not fulfilling the coalition agreement,” said a Blue and White statement. “Any other excuse is a sheer lie to the Israeli public,” it added.