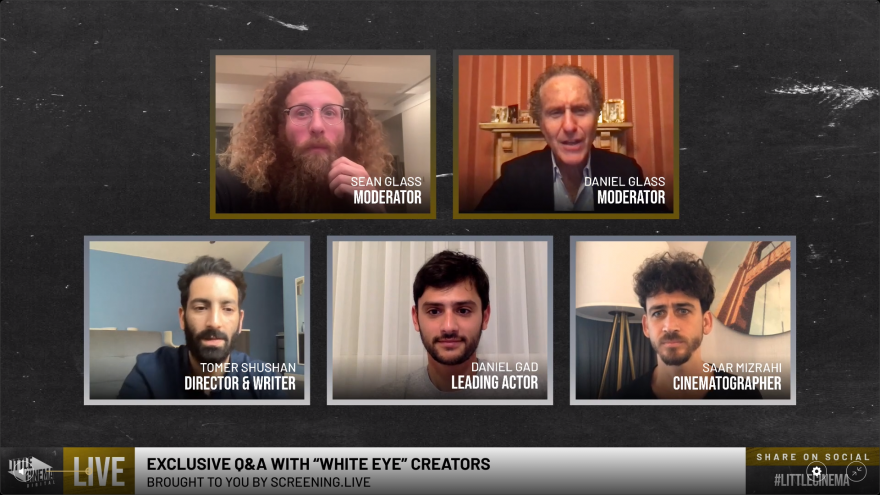 The actors, writers and directors involved in the Israeli short film "White Eye," which has been nominated for an Oscar in the Best Live Action Short category for the 93rd Academy Awards, 2021. Source: Screenshot.
Republish this article
1013 WORDS
Spread the word.
Help JNS grow!
Share now:

(April 23, 2021 / JNS) When Tomer Shushan had his bicycle stolen, the Israeli-born son of Moroccan Israeli immigrants went through a range of complicated emotions. Once he started the process of getting the bike back, he began to feel sorry for the alleged thief, called off the police, paid the immigrant who took it 250 shekels and still witnessed the man continuing to cry, afraid the police come for him.

“That I almost cost someone to lose [livelihood and possibly] his life, that’s what they experienced. I felt so bad that I didn’t want to have the bike anymore,” recalls Shushan. The 33-year-old graduate of Tel Aviv’s Minshar School of Art, Shushan turned his feelings into “White Eye,” a poignant 21-minute film he says he wrote in less than an hour, and later directed, about an Eritrean worker getting by in Israel and wrongly accused of stealing a bicycle from an Israeli man.

“Released in October 2019, the short film has appeared in and received awards at such festivals as the Warsaw Jewish Film Festival (Best Narrative Short), the Haifa International Film Festival (Best Short Film) and the 2020 SXSW (South by Southwest) Film Festival, where it was awarded Best Narrative Short. It is one of 15 films nominated in the Best Live Action Short category for the 93rd Academy Awards, which take place on April 25 at 8 p.m. EST at the Dolby Theatre in Los Angeles.

Shushan, lead actor Daniel Gad (who plays Omer, based on and closely resembling the name of writer “Tomer”) and cinematographer Saar Mizrahi recently discussed the film at an exclusive screening hosted by Daniel Glass, founder and CEO of Glassnote Records, and his son, Sean Glass, a filmmaker who has also had careers in music, tech and clothing (@sdotglass). Daniel Glass, who has seen the film many times, opened by noting, “I am sobbing and crying at this point,” in reaction to the thought-provoking film, which premiered April 20 on HBO Max.

The film was shot in one take over the course of a single night between 4 p.m. and 4 a.m. This means the movie was shot in its entirety multiple times. “Everyone said it was crazy,” recounts Shushan. “We believed it was the heart of the movie to do it in one take; it is just what we believed!” Despite his determination, Shushan playfully acknowledges that “until midnight, we had nothing, then magic. We got into the rhythm. We had six full takes and had to choose one before the sun came up.”

Much like Shushan’s painful personal stolen-bike story, lead actor Gad (Omer) spots his recently stolen bicycle in a run-down Tel Aviv neighborhood. He recognizes it due to a dent and a sticker his girlfriend had put on it and seeks ways to cut off the lock and reclaim it. Yunes, a black Eritrean immigrant on a break from his job in a nearby meat-packing plant, sees Omer and reports that he is the true owner of the bike, indicating that he paid 250 shekels for it. Two police officers respond and discover issues with Yunes’ visa, which could lead to possible deportation to his native country for him, his wife and their young child. Omer decides to withdraw money from a nearby ATM to pay for the bike. He returns to witness a painful surprise ending.

Gad, 31, is a well-known Israeli TV, film and theater actor. He served in the Israel Defense Forces Theater, studied acting at the Nissan Nativ acting studio in Tel Aviv, and has starred in the popular Israeli television sitcoms “Shababnikim” and “Galis.” He is currently starring in “Motel Bool BeEmtza,” has appeared in such movies as “The Damned,” and has performed in such plays as “Oliver” and “Shakespeare in Love.”

‘A story between two people’

As for his work on “White Eye,” Gad says “this was a very good challenge. It is the first time I did something like this. I really enjoyed the experience.”

Part of the experience involved not meeting Yunes until filming began. Shushan intentionally kept the actors apart until filming started.

Shushan also employed Eritreans who were not trained actors. “I met Dawit [Tekelaeb, who played Yunes] in the street when I saw him through the window of a hamburger restaurant washing dishes. I could see in his eyes he was so sad and not connected, so I approached him. He told me something—and I thought that the voice of immigrants should be non-actors and immigrants. Not everyone knows what it is like to wake in the morning and be illegal. So we used non-actors; they are the only ones who understand.”

Shushan also selected the title of the movie. “ ‘White Eye’ symbolizes blindness, which is what I feel the main character is in this moment; he is blind, and his vision comes back when he sees that his action causes harm to someone. This also happens from a white person’s eyes. The main issue is blindness, and how the Western world behaves toward refugees and immigrants.”

There are reportedly 40,000 to 80,000 migrants, illegal immigrants and asylum-seekers from Eritrea, Sudan and Somalia living in Israel with more than half living in the Tel Aviv area, mainly South Tel Aviv. The situation is politically and socially controversial, fraught for years with some locals complaining of a related increase in crime and rallying to move migrants out.

“I wrote [this film] because of the reality in Israel,” he says.

But he adds, “After it was in festivals, we understood it is a story about humans, about the international reality everywhere. It may have political aspects, but it is a story between two people—if one is more privileged, one can lose his life. There is no equality.”

The film raises important and timely issues about prejudice, racial bias, and the treatment of migrants and people of color.

The reality that Shushan has been nominated for an Oscar Award is slowly settling it.

“During this crazy year, it has been an amazing journey,” he says. “I am starting to believe. It is an amazing feeling you can’t put into words!”