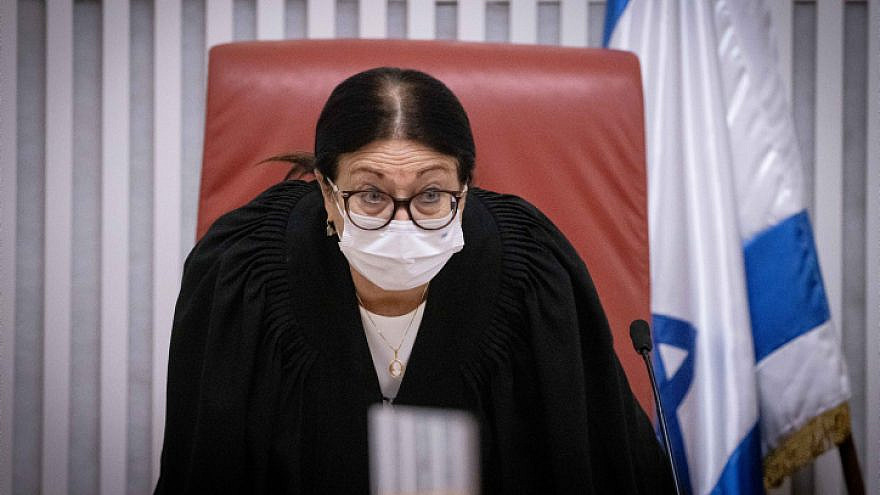 “The undermining of the legitimacy of the courts and their judgments in effect undermines the principle of the rule of law, and from here to anarchy and chaos the distance is short,” Hayut said, according to Kan, Israel’s public broadcaster.

“The judiciary is an island of stability in this time of great upheaval, although unfortunately there are those who have set themselves the goal of harming and weakening it,” said Hayut said.

“This trend is reflected, among other things, in blatant and unbridled attacks that sometimes border on actual incitement and are directed personally at judges in all courts, due to decisions that are not to the liking of those parties,” she continued. “These attacks are not just the domain of private individuals and tweeters of various social networks. They are also heard, regretfully, from elected officials.”

Hayut was reportedly referring to remarks made last week by Knesset Speaker Yariv Levin of Prime Minister Benjamin Netanyahu’s Likud Party and Bezalel Smotrich, leader of the Religious Zionist Party, who had attacked the court over a ruling in which it warned against passing future Basic Laws of the kind that extended the state budget by 11 billion shekels ($3.4 billion).

In a subsequent Facebook post on Monday, Levin wrote: “The silencing choir of the leaders of the judicial system worked overtime today, trying to guide the new legal revolution, which means the final transfer of the legislative powers from the Knesset to the Supreme Court. The attempt to delegitimize and threaten those who stand up with determination to protect the Knesset and democracy will fail.”

Smotrich also responded on Monday, tweeting: “Madam President, your verdict that disqualified a Basic Law statute is insane and a coup event, and must not be obeyed.”

Basic Laws, which have a quasi-constitutional status, had been considered beyond the reach of the Supreme Court.