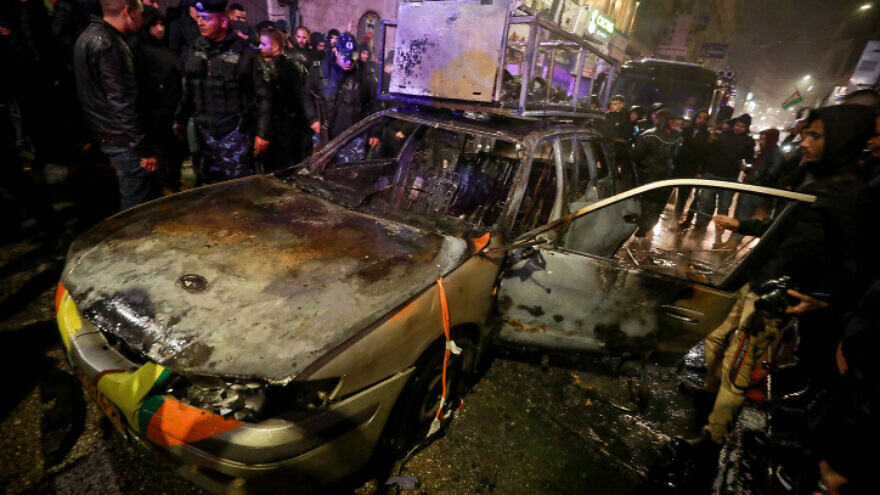 Palestinians gather around the car of Israelis who got lost in Ramallah and were rescued from an angry mob that set the vehicle on fire on Dec. 1, 2021. Photo by Flash90.
Spread the word.
Help JNS grow!
Share now:

Palestinian rioters surrounded the pair of Breslov Chassidim, residents of the settlements of Shilo and Elad, near Manara Square in the center of the city and set their car on fire. The driver and passenger sustained minor injuries.

The two were escorted out of the city and handed over to Israel Defense Force soldiers at the Beit El checkpoint after the Palestinians were warned that if the men were not returned to Israel, IDF forces would enter Ramallah.

Upon being questioned, the two claimed that they had wound up in Ramallah while trying to take a shortcut to Hashmonaim, near Modi’in. They said that when they reached Manara Square, the Palestinian crowd realized that they were Israeli citizens and began to circle their car, blocking them from driving away.

They said the Ramallah residents began throwing rocks at them, as well as kicking their vehicle and beating it with rods. The mob also smashed the car’s windows and set the vehicle on fire.

The reports were corroborated by Palestinian media.

Members of the Palestinian security forces arrived in a patrol car and helped the two men out of their car and into their own vehicle, then coordinated with the IDF Civil Administration to hand them over to Israeli forces at the checkpoint outside the city.

The Israel Police reported that after the two were returned to Israel, they were asked why they entered Area A, which is under the control of the Palestinian Authority, in the first place. They claimed that they had planned to drive to the grave of Mattathias, located near Hashmonaim, but had gotten lost and ended up in Ramallah.