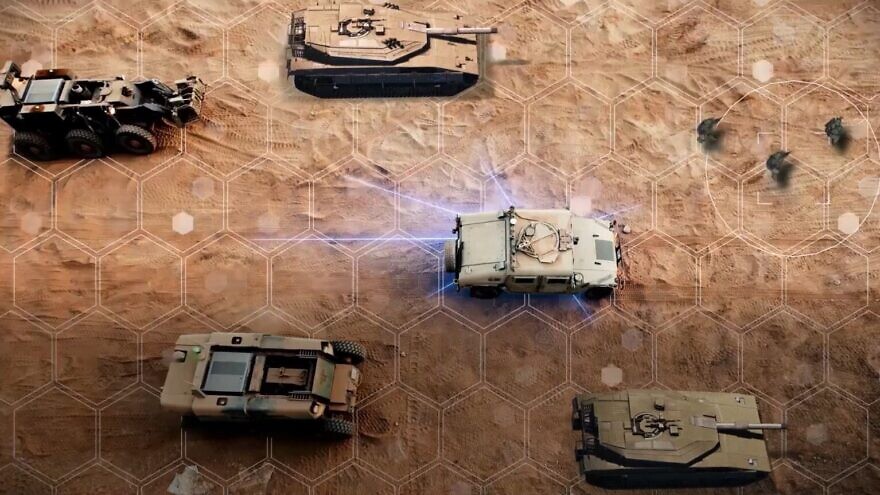 (November 5, 2021 / JNS) The arrival of artificial intelligence-powered ground vehicles is set to gradually transform Israel’s ground combat capabilities in the face of adversaries deeply embedded in urban settings, which are difficult to detect and respond to in time.

In October, Israel’s Ministry of Defense announced that Israel Aerospace Industries subsidiary Elta was chosen as the prime contractor for the Carmel future combat vehicle program after a two-year selections process.

In August 2019, the Defense Ministry held a demonstration in northern Israel of the three competing platforms for the Carmel program, created by IAI-Elta, Rafael and Elbit.

Yoav Turgeman, CEO of Elta, told JNS that the arrival of ground vehicles powered by artificial intelligence with autonomous capabilities will likely begin taking over land missions gradually just as unmanned aerial vehicles (UAVs) have been doing in past decades in air forces.

“IAI is going back to what it did 50 years ago when it demonstrated the UAV. Initially, it was very difficult for air forces to accept this. Today, UAVs are active in every modern air force and conduct more flight time than manned aircraft,” he stated.

After air forces recognized the technological and operational advantages of UAVs, they began incorporating them into growing numbers of missions. “I think this will be the same with future armored vehicles. This is a breakthrough concept that the IDF is leading, alongside very few states in the West,” he added.

‘It does not require a human to drive it’

In its statement last month, the Defense Ministry said that the Directorate for Defense Research and Development selected IAI-Elta to lead the Carmel program, and that the development would be conducted in cooperation with the IDF’s Ground Forces, and the Ministry of Defense’s Tank and Armored Personnel Carrier Directorate.

The overall objective, it said, “is to significantly improve maneuvering capabilities. The Carmel concept will be applied to current and future armored fighting vehicles and will include crew members in closed hatches, operating a range of autonomous and AI-driven platforms.”

Turgeman said the main approach taken by IAI-Elta is to create a “glass cockpit” vehicle in which two onboard personnel replace the traditional four-person tank crew, thanks to the ability of the onboard computer “brain” to take over many key missions. The onboard crew will be able to “see-through” thick steel, thereby eliminating the need to place their heads out of the hatchets in hazardous combat zones.

“This creates good situational awareness. Our solution is made up of a system and a process that makes decision-making easier. The tank can drive itself off-road as well and can recalculate its routes while dealing with obstacles. It does not require a human to drive it,” said Turgeman.

The computer system that controls the vehicle, also onboard, is called Athena. It uses a range of sensors to locate the enemy, analyze its firearms, scan multiple lines of sights and then use that data to influence routes and operational decision-making.

All of that data also influences what kind of firepower the system advises is activated and whether to drive forward to take cover.

Ultimately, this enables the human operator to deal with the battle picture and not be distracted with technical matters, he added. Instead of worrying about whether his tank will hit a wall, where he is on a map or how to recalculate a route, the human operator can focus on managing the battle.

“Athena is a system that also receives data from external sensors; it plans courses of action from a variety of information,” said Turgeman. It relies on AI and deep reasoning capabilities, which IAI-Elta has been developing for years.

The Carmel model includes radars, advanced cameras and systems that can detect the source of enemy fire. These sensors continuously nourish Athena with data.

‘Capabilities can go onto a number of platforms’

Asked if Carmel’s technologies are currently being introduced into IDF systems, Turgeman said he would not “rule it out,” but stressed that Carmel is more about capabilities than any individual single vehicle.

“These capabilities can go onto a number of platforms,” he said.

Components of the Carmel future combat vehicle program will be integrated onto IDF’s Eitan wheeled armored fighting vehicle, according to the Defense Ministry.

The Defense Ministry said in its statement on Oct. 10 that “many of the Carmel’s capabilities will be autonomous, including travel, detection of threats, defense and acquisition of targets. With its innovative user interface, soldiers in the vehicle will be able to view the battlefield in several dimensions. They will receive intelligence, detect threats and acquire targets automatically, enabling them to effectively assess situations and make optimal decisions.”

The ministry added that “the Carmel concept is groundbreaking on a global scale and has garnered the interest of many international industries and militaries.”

“There are many interested parties, and we have received offers of cooperation from central companies in the world,” said Turgeman. “We are examining these in coordination with the defense establishment.”