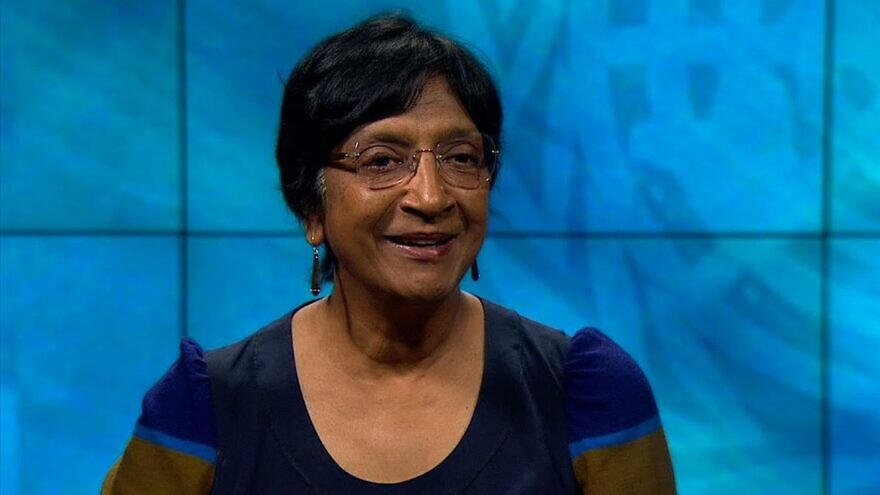 (June 8, 2022 / JNS) Jewish organizations are responding with outrage over what they consider a flawed and biased report on the 2021 conflict between Israel and the Hamas terrorist organization in the Gaza Strip after the report’s release by the U.N. Human Rights Council’s Commission of Inquiry (COI) on Tuesday.

The report blames the root of the conflict between Israel and the Palestinians on the “occupation of Palestinian territory and discrimination against Palestinians.”

“The findings and recommendations relevant to the underlying root causes were overwhelmingly directed towards Israel, which we have taken as an indicator of the asymmetrical nature of the conflict and the reality of one state occupying the other,” she wrote.

The COI, which was not supported from its creation by either the government of Israel or the United States, was criticized by the U.S. State Department on Tuesday, which noted in a statement that despite its commitment to human rights in Israel, the West Bank and the Gaza Strip, the report demonstrated the “one-sided, biased approach” of the COI that does not advance the prospects for peace.

“While the United States believes the HRC plays a crucial role in promoting respect for human rights and fundamental freedoms globally, this COI and report do not advance this goal,” U.S. State Department spokesman Ned Price said in the statement.

“Israel is the only country subject to a standing agenda item at the HRC and has received disproportionate focus at the HRC compared to human-rights situations elsewhere in the world,” he continued. “While no country is above scrutiny, the existence of this COI in its current form is a continuation of a longstanding pattern of unfairly singling out Israel.”

Price cited the bias against Israel as one of the “flaws” that the Biden administration believed it could help fix by having rejoined the council after the United States withdrew under former President Donald Trump.

A ‘baseless and biased’ attack

For Jewish organizations that roundly rejected the COI’s creation last year, the contents of the report were not unexpected.

B’nai B’rith International pointed out that much of the report was a rehash of ongoing motifs that have slandered Israel for more than a half-century and whose appointed board members had records of taking public positions against Israel.

“Israel’s enemies’ open, violent rejection of the Jewish state’s right to exist—within any boundaries—apparently is not a root cause of the conflict, nor of the defensive efforts repeatedly necessitated by fanatics’ attacks on Israeli civilians from among Palestinian and other Arab civilians,” wrote B’nai B’rith president Seth J. Riklin and CEO Daniel S. Mariaschin in a joint statement.

“Notwithstanding decades of unparalleled Israeli overtures, risks and sacrifices for peace, including profoundly painful territorial concessions after repeated wars launched by Israel’s adversaries,  the commission further concluded that ‘Israel has no intention of ending the occupation, has clear policies for ensuring complete control over the Occupied Palestinian Territory.’ No mention at all is made of Palestinian intention to finally discontinue terrorism and endemic incitement, recognize the equal rights and legitimacy of Israeli Jews and embrace negotiated compromise rather than confrontation on the ground and in international settings,” they wrote.

In response, B’nai B’rith is releasing a series of video testimonials by victims of Palestinian terror attacks in Ashdod, who have experienced “physical and psychological trauma,” from being targeted.

The Conference of Presidents of Major American Jewish Organizations released a joint statement on Wednesday from chair Dianne Lob, CEO William Daroff and vice chair Malcolm Hoenlein strongly condemning the report, saying that it blatantly ignored the actions of Hamas, Palestinian Islamic Jihad and other groups in last year’s conflict which saw more than 4,000 rockets launched into Israel.

Their statement also commended the State Department for its opposition to the report.

“The COI, headed by commissioners whose anti-Israel bias has been firmly established by years of quotes and writings, has opportunistically applied its inappropriate mandate and disproportionate budget to condemn Israel’s defensive military action to protect its civilian population from existential threats,” they wrote. “The report distorts and minimizes the threats facing Israel, particularly violence by Hamas, which it refuses to label as a terror organization. Additionally, it ignores the countless instances in which the Palestinian Authority has operated in bad faith at the negotiating table, including repeated incitement of violence against Israel and its civilians. [P.A. leader Mahmoud] Abbas and other P.A. officials have directly encouraged violence, murder and hatred directed against Jews, particularly through ‘pay-for-slay’ schemes that promote the killing of Jews and Israelis for profit.”

AIPAC called the report a “baseless and biased” attack on Israel in a series of tweets on Tuesday.

“The report rehashes more than 50 years of discriminatory and one-sided U.N. reports, commissions and resolutions that inaccurately blame the Israeli-Palestinian conflict on the Jewish state—laying the groundwork for future boycotts against Israel and justifying terrorism against Israeli citizens,” tweeted AIPAC. “The authors of the COI refuse to accept Israel as the homeland of the Jewish people, and they ignore the historic and ongoing refusal of the Palestinians to accept Israel as a Jewish state as the root cause of the conflict.”

AIPAC called on Congress to pass the bipartisan COI Elimination Act, which would prevent American taxpayers’ funds from going to the commission.