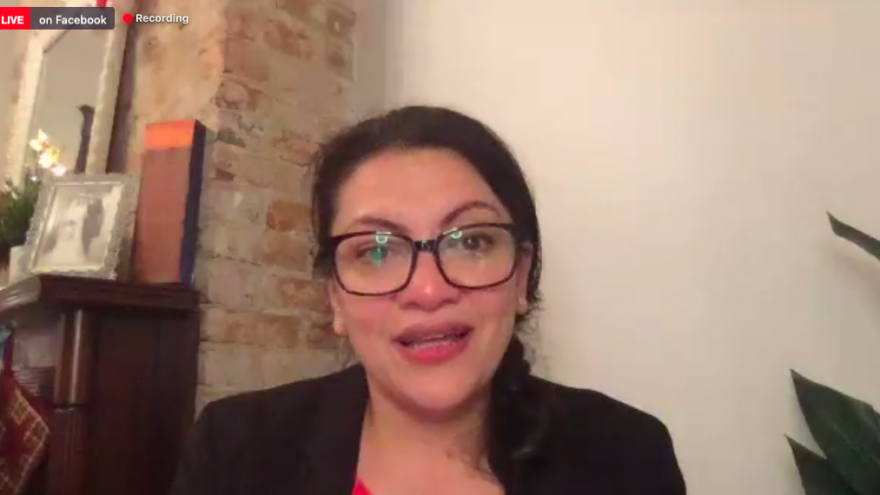 (December 16, 2020 / JNS) Anti-Semitism watchdog groups called out “disingenuous efforts” to address hatred against Jews displayed this week by anti-Israel panelists on a webinar.

Nearly 1,000 viewers tuned in to watch the panelists discuss their thoughts on combating anti-Semitism, yet in a twist that didn’t go unnoticed, many anti-Semitic and anti-Zionist remarks were made during the 90-minute event.

Tallie Ben Daniel, JVP’s director of special projects, opened the discussion by stating that the “true targets” of the International Holocaust Remembrance Alliance’s definition of anti-Semitism are not Jews, but “Palestinians.”

Liora Rez, executive director of StopAntisemitism.org, told JNS that the event was “a new low.”

She said “Lamont Hill lost his job with CNN over his anti-Semitism. Tlaib is currently being called out by fellow Congressmen over her continued anti-Semitism. Ransby openly supports a terrorist that murdered two Jewish students. These people are not allies of the Jewish people, but rather, identifiable threats posing as social-justice warriors.”

During the discussion, speakers repeatedly stated that “all types of anti-Semitism,” such as Islamophobia and anti-black racism, “are all interconnected.” They also denied that pro-Palestinian activism, including support for boycotting Israel, is equivalent to anti-Semitism.

Beinart, the only Jewish member of the panel and currently a CNN commentator and columnist for The New York Times, claimed that “it’s critically important that we fight for the right of anti-Zionist Jews and anti-Zionist non-Jews to be part of the Jewish community and part of these conversations.”

He also accused Israel of having a hierarchy of putting “Jews above Palestinians.”

Beinart tried to defend his fellow panelists, who have all been criticized for their anti-Semitic views on Israel, telling viewers, “I know that there are probably a lot of people who are watching this who came to watch it because they don’t like the folks on this panel. … Listen to the folks on this panel and what they said. Do they sound like people who hate Jews to you? Trust your gut. Do they sound like anti-Semites to you?”

Sacha Roytman-Dratwa, director of the Combat Anti-Semitism Movement, told JNS, “The idea that those who themselves have contributed to the growth in anti-Semitism can define Jew-hatred is absurd.”

‘A tool used to manufacture fear and division’

Lamont Hill and Tlaib both previously expressed support for Palestinian freedom “from the river to the sea,” which is commonly used as a call to destroy Israel. As the last panelist to speak, Tlaib, who supports the BDS movement, cried on-screen when talking about how she has been “demonized” and accused of being anti-Semitic.

“Tell everybody, I don’t hate you. I absolutely love you,” she said. “If anybody comes through my doors or through any forum to try to push anti-Semitism forward, you will hear me being loud with my bullhorn to tell them to get the hell out.”

She added, “I hope all our Jewish neighbors know we’re in this together.”

The night’s moderator, JVP’s deputy director Rabbi Alissa Wise, told viewers that she is “instinctively repulsed” by the idea that Jews need Israel “as somewhere to go” when they are next at risk of genocide. She also said that a “free Palestine is required if we want a free world for everyone, including Jews.”

She later stated that those who want to call solidarity with Palestinians anti-Israel are “using anti-Semitism to manufacture hate.”

“People who want to maintain Israeli government control over Palestinian lives and land play a very dangerous game when they call solidarity with Palestinians a form of anti-Jewish hatred. It’s not anti-Semitism to see that Israel has its boot on Palestinians,” she stated. “Anti-Semitism is a tool used to manufacture fear and division.”

Roytman-Dratwa said “this event was an attempt to turn reality on its head. It is nothing short of dangerous hypocrisy by those who have stoked anti-Semitism to claim that they themselves are serious voices in tackling Jew-hatred. Nobody, including self-styled progressives such as Representative Tlaib and Professor Hill, should be allowed to dictate to Jews what constitutes anti-Semitism. They simply would not treat any other minority group in the same way.”