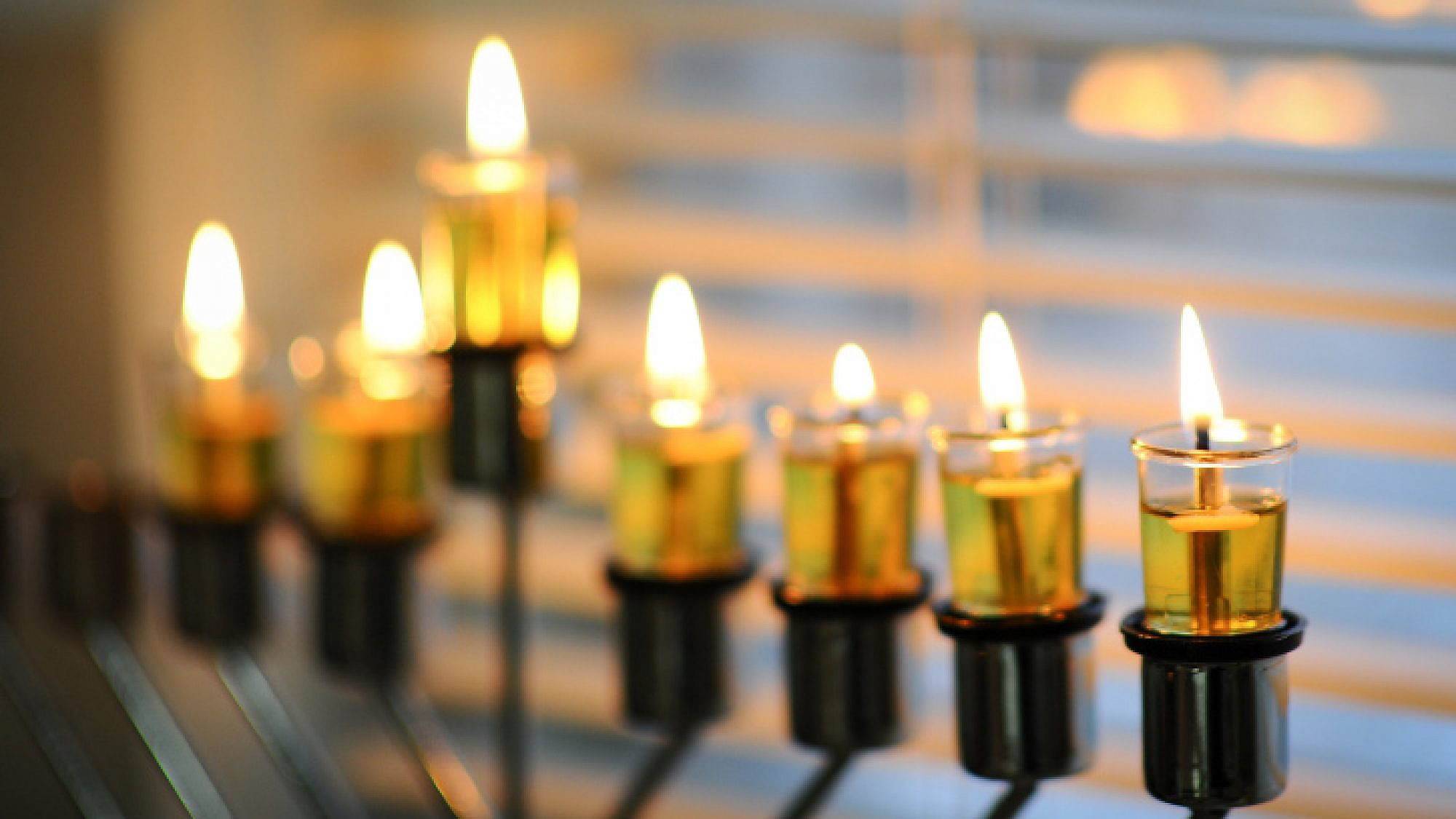 (December 11, 2020 / JNS) Just saying the word “Hanukkah” brings smiles. As does conjuring up the sight of candles ablaze and hearing the sounds of boisterously off-key renditions of “I Had a Little Dreidel” and “Maoz Tzur.” And the smells? Look no further than those potato latkes fresh from the pan just begging for their applesauce and sour cream. Top that off with the sweetness of sufganiyot, those addictive jam-filled doughnuts. (Dieters beware: In Israel, you’ll also find caramel, banana cream, hazelnut and chocolate-chip ones.)

But if it’s a Hanukkah party you’re looking for this year (when Jews the world over light the first of eight candles on Thursday night, Dec. 10) with social distancing remaining in effect due to the global coronavirus pandemic, that pile of holiday invites is most likely somewhat slimmer than in years past.

Equally sobering is the fact that with many Jewish families up against job losses and business shut-downs this year, in many homes there’s not only a shortage of cash for gift-giving, but an atmosphere of worry and stress. That can put a serious damper on holiday festivities.

But inspired by Judah Maccabee, his sons and their small band of fighters who managed to reclaim the temple in Jerusalem from the Syrian-Greeks more than 2,000 years ago, unearthing a tiny cruse of oil that was destined to burn in the menorah for a miraculous eight days, “as Jews, we’re still super adaptable,” says Neal Hoffman, creator of the best-selling “Mensch on a Bench” and assorted other Jewish-themed stuffed toys—95 percent of them are sold in the weeks leading up to Hanukkah.

“We pivot on a challenge, so this year, we’ll find creative ways to celebrate and connect to the people we love,” he says.

When you can’t be with family (or friends) in person, Hoffman suggests Zooming your Hanukkah parties—viewing each other’s long-distance latkes and taking turns spinning dreidels across the miles. “With its eight nights, Hanukkah is much more conducive to a series of Zoom celebrations than Christmas,” says Hoffman, whose wife and two sons can look forward to having Dad home in Cincinnati for the first time in years (he usually does “Mensch on a Bench” appearances during the holiday).

Since Hanukkah has over the years absorbed much of the materialism of Christmas, this COVID-19 year is an invitation to siphon some of that materialism and glitz off the holiday, he adds. “Instead, it’s a year for families to create magical Jewish moments with the emphasis on our values and taking pride in our people’s amazing story.”

One such value is giving to those in need. Hoffman suggests devoting one of the nights to giving gifts or donations to the less fortunate “who need our help more than any time in recent memory.”

Another one of the nights can be devoted to gifts made or purchased (possibly with some underwriting from you) for siblings. Which means asking themselves what would delight their brother or sister and then watching proudly as they open their (however modest) gifts.

A third evening, says Hoffman, can be spent at a soup kitchen or, when safety permits, volunteering at the local nursing home. A bonus would be asking the Jewish residents what they remember about Hanukkah when they were kids.

Though get-togethers may be severely limited, the requisite holiday pounds can still be gained—and happily shared with friends and family.

Opening the door to a delivery of a homemade food gift is a delightful surprise, says Mollie Katzen, who brought the world The Moosewood Cookbook back in 1974, followed by The Enchanted Broccoli Forest (1982) among others. Nominees include a loaf of banana bread wrapped in blue cellophane, lentil soup or your own roasted tomato spread (hint: start collecting jars now). 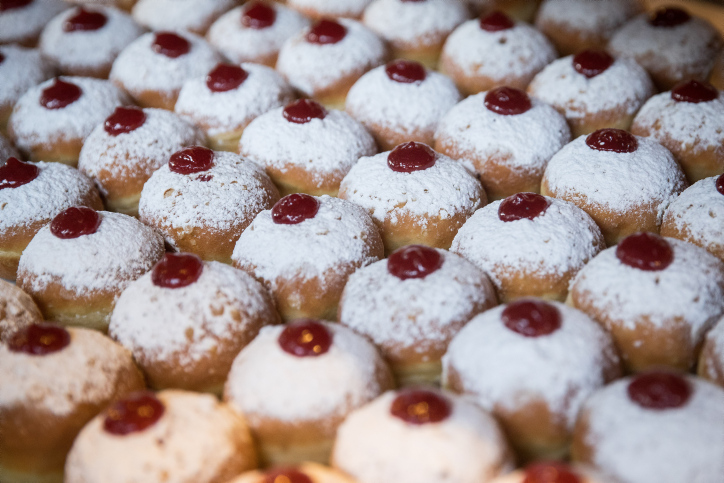 “With edible gifts, you’re dropping love at their house,” says Katzen, who maintains that “one of the better things about the pandemic is that everyone started baking.”

By including a recipe card in the package, you’ll also have the beginning of a recipe exchange that can last well beyond the holiday, “a delicious way to be together even when we’re apart.” The good news for far-flung families: Hanukkah cookies for instance can survive the mail unspoiled. (See Katzen’s Perfect Latke recipe below).

Always a popular Hanukkah gift, Jewish books are more important than ever this year when so many grandparents and other relatives are missing from the table. So says Meredith Lewis, director of content for PJ Library, which, with its community partners, sends out a whopping 680,000 Jewish children’s books each month to families in North America and beyond.

“Being far from family, books transmit the message of Hanukkah through the power of story,” says Lewis. “Children feel part of something bigger than themselves—this miraculous time in their people’s history.”

Her picks of this year’s crop of children’s Hanukkah books include The Eight Knights of Hanukkah (Holiday House) by Leslie Kimmelman, featuring dragons who keep interrupting the festivities (ages 3-7), and The Ninth Night of Hanukah by Erica Perl (Sterling) about what happens when a family moves into a new apartment just before Hanukkah and can’t find their menorah (ages 3-8). And for the littlest celebrants, Lewis nominates the board book, Happy Hanukkah, Pout-Pout Fish by Deborah Diesen (Farrar Straus Giroux). 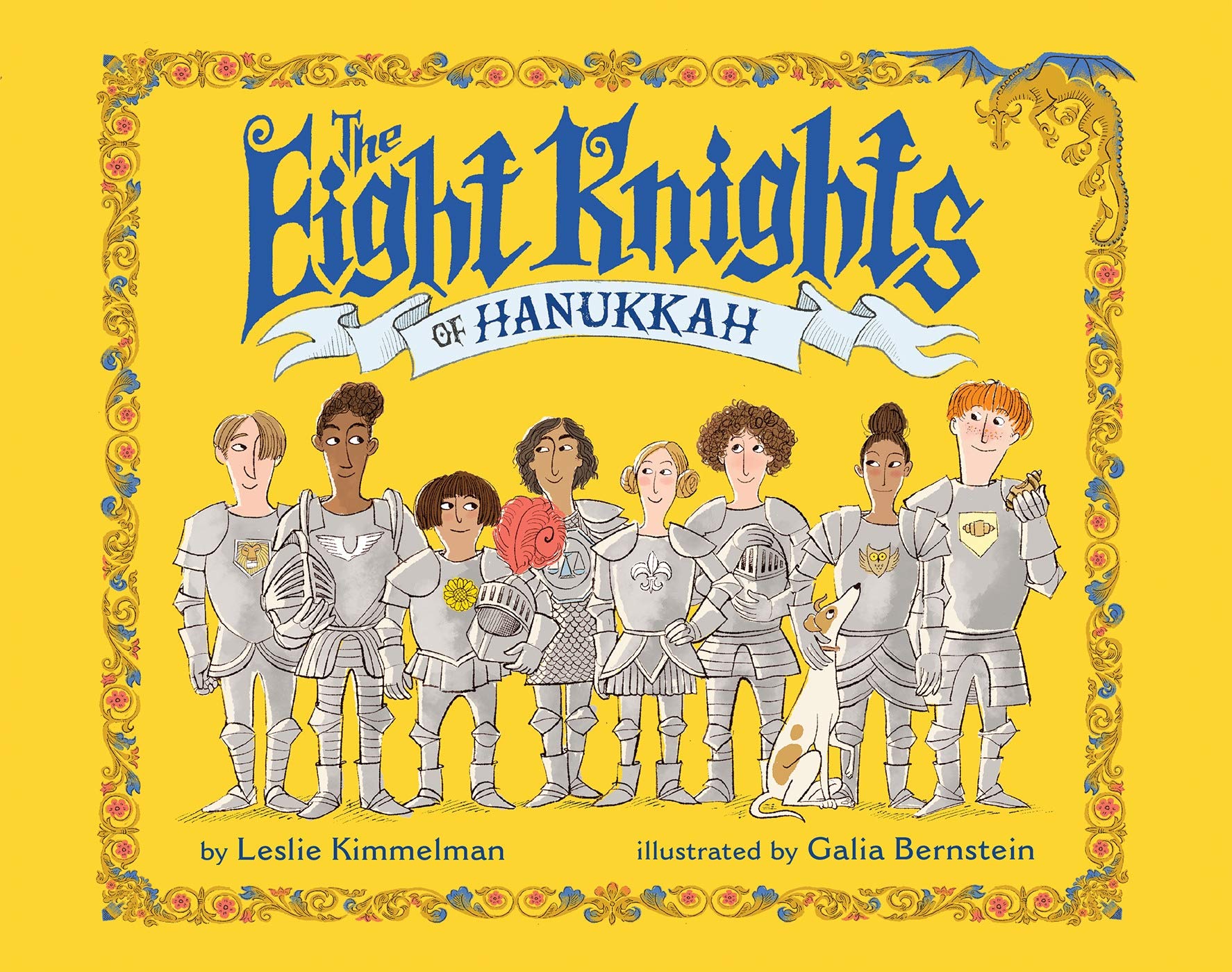 “The Eight Knights of Hanukkah” by Leslie Kimmelman.

And some Hanukkah classics never die. Take Isaac Bashevis Singer’s much-beloved The Power of Light: Eight Stories for Hanukkah, giving families one story each night to transport them back in Jewish time.

Eric Kimmel’s Hershel and the Hanukkah Goblins is also still going strong since 1994. “We’re sending Hershel out again—many parents remember him from when they were kids,” says Lewis. Hershel exemplifies Jewish bravery and cleverness, she adds, noting that “the same bravery and cleverness that the tiny Maccabee army used to defeat the huge one that have helped us survive for thousands of years.”

And far-away grandparents can still read Hershel and other Hanukkah books with their grandchildren thanks to Caribu, an app that integrates children’s books and activities into a video call. For PJ Library books on Caribu, click here. Note: The free Caribu subscription plan allows 15 books, games and/or activities per month.

As the candles burn and you reprise the tried and true Hanukkah songs, starting with the blessings (three on the first night and two the next seven) then “Maoz Tsur” (“Rock of Ages”) and I Have a Little Dreidel, if you want some outside musical help, the Maccabeats are ready (on YouTube). Though the acapella group’s 2020 Hanukkah offering was not ready at press time (check their Facebook page or www.maccabeats.com later), their 10 previous ones are on YouTube.

“Everyone needs something fun and even a little silly right now; it’s been a pretty serious year,” says founding member Julian Horowitz. Here’s their “fun and pretty silly” version of “I Have Little Dreidel.”

So what if the holiday crowd is smaller than usual? Even the nuclear family deserves festive foods to create delicious Hanukkah memories. If the delicacies of Hanukkahs past could put a strain on the budget, Joan Nathan has a shocking suggestion: “Just skip the big expensive brisket.”

But you don’t have to give up the tradition in the process, says Nathan, author of the 1998 classic Jewish Cooking in America, King Solomon’s Table and other titles. “You can make a meat tzimmes instead or schnitzel. Or why not burgers with bread stuffing? As long as it’s something special for the holiday.”

This year, that “something special” needs to take creative new forms, says Rabbi Binny Freedman. “The first thing we do is publicize the miracle of our people’s survival by lighting the candles so everyone can see them,” says Freedman, who directs Isralight in Jerusalem’s Old City, where the narrow streets will be ablaze with outdoor hanukiyahs (menorahs). 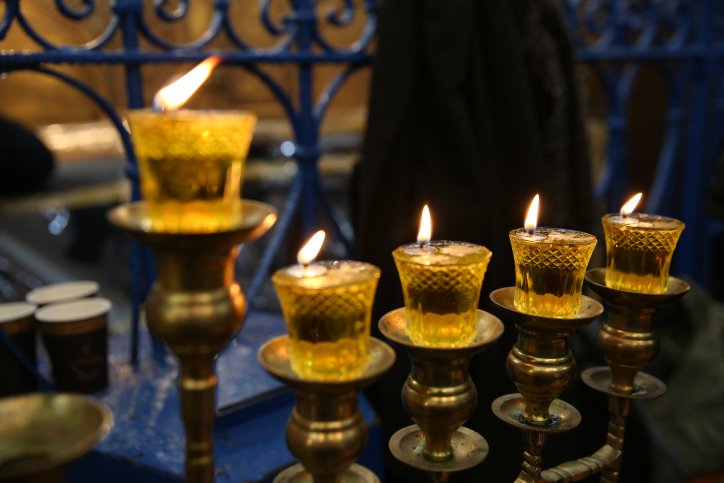 A menorah on the fourth night of the Jewish holiday of Hanukkah, Dec. 25, 2019. Photo by David Cohen/Flash90.

The second thing: Gratitude. “Right now, instead of complaining about the situation, what if we could step out of the darkness and into the light of Hanukkah by thinking of everyone and everything we can be grateful for?”

Last spring, in the midst of Israel’s first big lockdown, there was a moment when Israelis were asked to step outside and applaud the country’s health-care workers. “So why not pick a group to appreciate every night of the holiday,” says Freedman. “The doctors one night, then the teachers who had to quickly learn to teach on Zoom, the nurses, the ambulance drivers, your neighbors who helped you out.”

“And you know we always celebrate the guys who found the little cruse of oil. But you know who we never thank?” he adds with a laugh. “It’s the kohen (‘priest’). He was the guy smart enough to hide it!”

Eight Hanukkah Gifts Under $20 for Kids 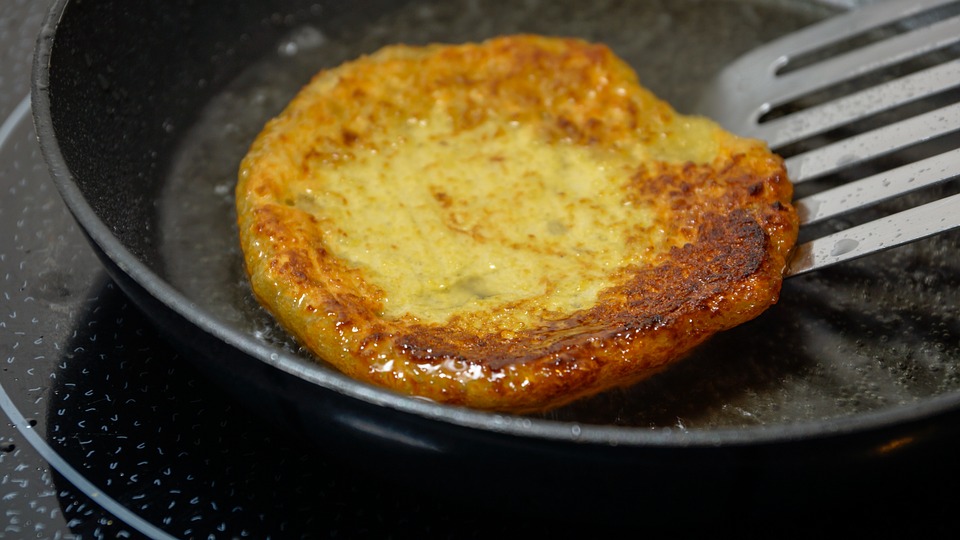 Grate the potatoes and onion together on the big blade of your food processor. Then squeeze the living daylights out of them, best done with cheesecloth and a strainer.

Beat the egg and add to the mixture. Cover the bottom of the frying pan with oil (⅛ to ¼ inch), making sure to keep it covered throughout cooking.

Set the stove on medium-high and heat the oil slowly until hot enough that a potato strand sizzles on contact.

Make small latkes, about ¼ cup each. Don’t crowd the pan.

Cook a few minutes on each side. Drain the latkes on a rack, and never stack them—a soggy latke is a crime against humanity.

Keep them in the oven on Hold-Warm, placing the rack of latkes over a baking tray to catch the drips.

Advice: Cook them a few hours early, so you don’t have to spend the entire evening at the stove and can actually enjoy yourself.