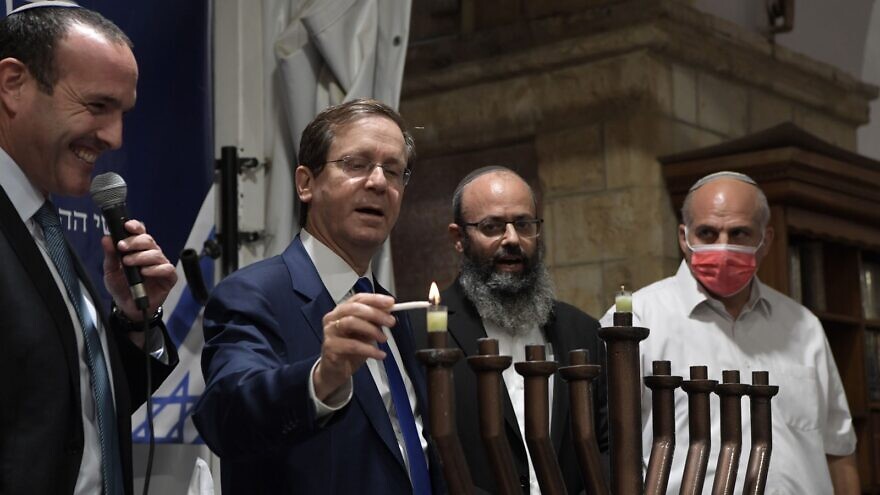 Israeli President Isaac Herzog lights a menorah inside of the Cave of the Patriarchs in the city of Hebron, Nov. 28, 2021. Credit: Koby Gideon/GPO.
Republish this article
411 WORDS
Spread the word.
Help JNS grow!
Share now:

(November 29, 2021 / JNS) Israeli President Isaac Herzog celebrated the first night of Hanukkah at the Cave of the Patriarchs in Hebron, where he noted the city’s “unquestionable” Jewish connection.

“The historical connection of the Jewish people to Hebron, to the Cave of the Patriarchs, to the heritage of mothers and fathers is unquestionable,” said Herzog, further asserting that “recognition of this connection should be beyond all controversy.”

In his address, Herzog also spoke of his family’s connection to Hebron, noting that his great-great-grandmother once lived in the city and survived the 1929 Hebron massacre, when more than 65 Jews were killed by Arab rioters.

“I have no doubt that she would have been very moved by the fact that one of her descendants is lighting Hanukkah candles in the Cave of the Patriarchs as the president of the state of Israel,” he said.

The Cave of the Patriarchs is one of the holiest sites in Judaism, where it is believed to be the burial site of Abraham and his wife, Sarah, as well as other biblical patriarchs and matriarchs, including Isaac, Rebecca, Jacob and Leah. Muslims also consider it to be holy and have a mosque on the site.

As such, the site, as well as the city of Hebron as a whole, has been a significant flashpoint within the Israeli-Palestinian conflict. Israel gained control over the city during the Six-Day War in June 1967. As part of the Hebron protocol of 1997, the city is divided into two sectors with H1 controlled by the Palestinian Authority and H2, roughly 20 percent of the city, under Israeli control.

Religious Zionist Party leader Bezalel Smotrich tweeted: “President Herzog, in the name of the people of Israel throughout the generations, in the name of our fathers and holy mothers, I want to say thank you.”

Nevertheless, the visit was protested by left-wing politicians and activists. The left-wing NGO Peace Now, accompanied by Meretz Party Knesset member Mossi Raz, gathered about near the cave screaming “shame” as the president made his way into the case,” reported Israel Hayom.

Breaking the Silence, a group of former Israeli combat soldiers who oppose Israel’s policies in the West Bank, accused Herzog of “giving an official seal of approval to this obscene reality and the people perpetuating it.”