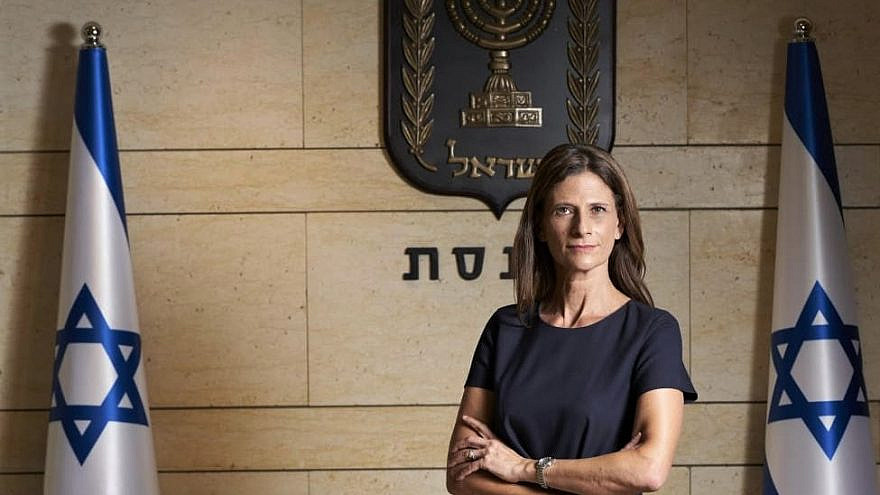 (October 15, 2021 / JNS) As a former Knesset member and now head of the Nefesh B’Nefesh Institute for Aliyah Policy and Strategy, as well as a senior consultant to the Jewish Federations of North America, Michal Cotler-Wunsh is no stranger to politics or Diaspora Jewry, both of which she will need intimate knowledge if she is chosen to head the Jewish Agency, which is currently looking for a new director.

“There is a direct correlation between global Jewry and the matrix of the goals, vision, mission and values of the Jewish Agency,” Cotler-Wunsh, 50, told JNS. The Jewish Agency can and should serve as a platform “that actually transcends local and global politics and religious affiliation.”

Furthermore, she explained, the agency can “find and define the intersections that unite us. They are far greater than what divides us.”

She said that enhancement of aliyah, absorption and integration, in addition to a renewed relationship between Israel and global Jewry, could contribute and benefit from “the imperative to understand, identify and address anti-Semitism, delegitimization and double standards as a uniting force. The Jewish Agency is potentially the most important platform from which to advance those three pillars,” she said.

She added that whoever is at the helm of the agency “will need to be able to bridge gaps, unite and heal rifts, and speak the language of human rights. That would make very clear that we can reach across all differences of politics, denomination, age, geography, and that we come from a place that says clearly that the State of Israel remains the shared and joint project of Jews in Israel and around the world, representing the return to an ancestral homeland by an indigenous people after millennia of exile and persecution.”

This bold approach, in Cotler-Wunsh’s view, would enable the organization “to also reach younger generations that may not feel like they have anything to do with this conversation. We know the ‘weaponization’ of human rights has driven a wedge between Israel and younger Jews.”

The agency “is precisely at that intersection of extending a hand. It is the responsibility of the state of Israel to extend that hand as the nation-state of the Jewish people, and it is the Jewish Agency that can be that gathering place for not only discussion and understanding, but for reflection and making accessible those voices and those challenges internally to Israeli decision-makers and to the Israeli public.”

According to Cotler-Wunsh, the agency has “tremendous reach” and “the mission, vision and the values to unite and not divide, to heal and not deepen the rifts.”

‘Making it a two-way bridge’

In her view, part of the role of the agency is to bridge the gap from the Israeli side.

“Global Jewry is keenly aware of the State of Israel, and it is imperative that the Israeli public be keenly aware of and connected to global Jewry,” she said. “It is unacceptable that Israeli children growing up in Israel don’t have the same sense of connectedness and understanding that their peers around the world have of Israel.”

She suggested that the agency can help shift the relationship paradigm so that “everybody has a voice at the table.” It is the “prime potential platform from which to do that.”

Over the last two decades, if not more, Reform, Conservative and Orthodox Jews alike have felt alienated from the state of Israel, justified or not.

Cotler-Wunsh recommended “widening the tent to ensure that all voices that are willing and wanting to be a part of the conversation have a place at the table.”

Of course, this doesn’t mean everyone would agree on everything, “but there is a responsibility to include all voices and to reach out to those who may not be there currently, whether it’s an age or generational lack of involvement.”

“Having everybody gather around the table and not just representing Israel to the Diaspora, but making it a two-way bridge and ensuring that the connections transcend time and place, that is the role of the Jewish Agency,” she said.

She suggested that it is important to engage the younger generation and imbue them with a feeling of identity, belonging and collective responsibility. “That really is the ‘Iron Dome,’ ” she pointed out, “not only of the State of Israel but of the Jewish people.”

‘The language of human rights’

Cotler-Wunsh has long insisted that the language of human rights is an important tool to be used, and that Jews around the world must get involved and fight back against the anti-Israel rhetoric that has captured the attention of so many young people.

“The language of human rights has driven a wedge between Israel and its legitimacy in the global arena,” she said. “The continuum of connection that the Jewish Agency has represented for nearly 100 years is a collection of experiences and knowledge and insights that creates identity. The imperative is to engage younger generations in Israel and around the world, to be relevant to them since it involves the development of their identities so critical to Jewish continuity.”

She noted that the agency can play an important role in resolving tensions and disagreements.

There are issues that we have “swept under the rug for far too long and impact our ability to create and enhance coexistence—between global Jewry and Israelis, between Jews and Arabs, between ultra-Orthodox and secular and others. Those are the conversations that actually enrich the experiences available to Israel by engaging with global Jewry,” emphasizing that “you matter, we need one another, we share and lend our experience to this. And everybody benefits.”

Reflecting on the possibility that she could be selected to head the agency, Cotler-Wunsh reminded that “it’s a mission; it’s not a job. And because it’s a mission, I would be honored to serve the State of Israel and Jewish people from this platform. I am committed to continue serving and representing the precise issues that are the mission, vision, values of the Jewish Agency in other capacities.”